Can Little Cats Feet Bring Down the Mighty GWB? 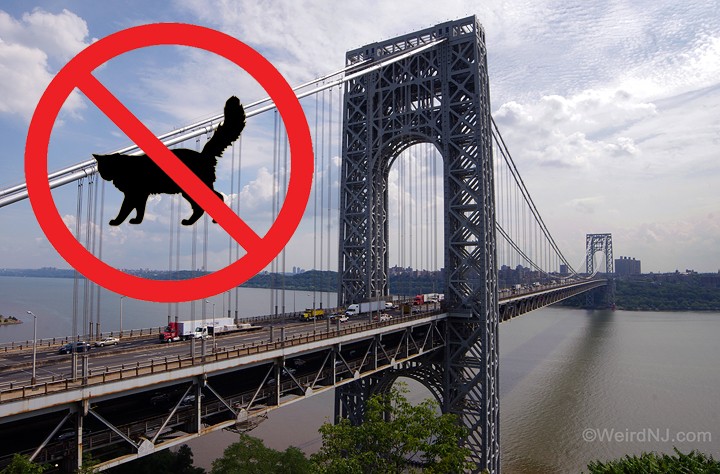 There is legend that if a cat walks across the George Washington Bridge the vibration of its little feline feet will create just the necessary oscillation to cause the superstructure to collapse into the Hudson River. One reader writes:

Dear Weird NJ: My niece is currently attending high school in Pennsylvania and she is an honors student. She is attending a high tech physics class and she says that her physics teacher, MR. X., claims that there is a sign leading onto the George Washington Bridge stating, “No Cats Allowed.” It is to her understanding that if a cat were to cross the GWB on foot, the bridge would collapse. I, being an electrical engineer and a researcher of phenom, thought this story might be crazy enough to be true. The explanation given was that the frequency at which a cat travels can cause the right vibration to cause the bridge to collapse. I have dabbled in different harmonic frequency variables and it may or may not be true. If the NYC marathon were to be run and everyone were on the same step, this may cause the bridge span to reverberate apart. This may be worth some investigation.  –Michael D. Gehrum

Michael: We asked Michael Aaron Rockland, professor of American Studies at Rutgers University and author of the upcoming book “The George Washington Bridge: Poetry In Steel” this question, and here is his reply: “There is a phenomenon on lightweight bridges where, if an army marched across it in step they could set up oscillations that might bring it down. But the George is built too strongly for that. The Verrazano, though built a bit less strongly than the George, obviously can handle 30,000 marathoners each year. But a cat? No, that’s pure myth.”

The story of the company of soldiers bringing down a bridge by walking over it in step is based on an actual incident. The Angers Bridge, also called the Basse-Chaîne Bridge (shown below), was a suspension over the Maine River in Angers, France. It collapsed in 1850 while a battalion of French soldiers was marching across it, killing over 200 of them. Ever since, soldiers have been ordered to break step while crossing a bridge; they most likely didn’t have to, but it’s better to be safe than sorry. 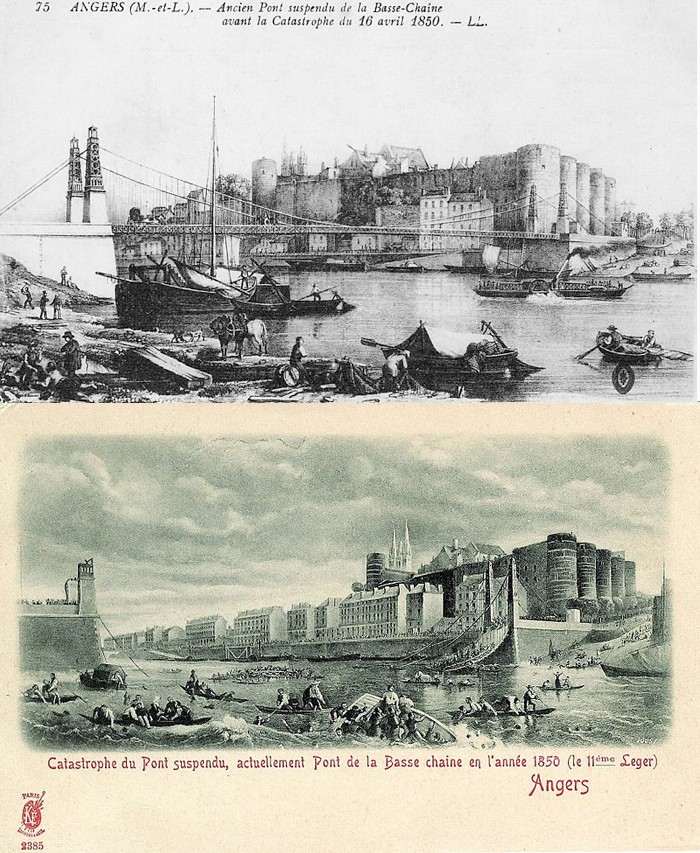