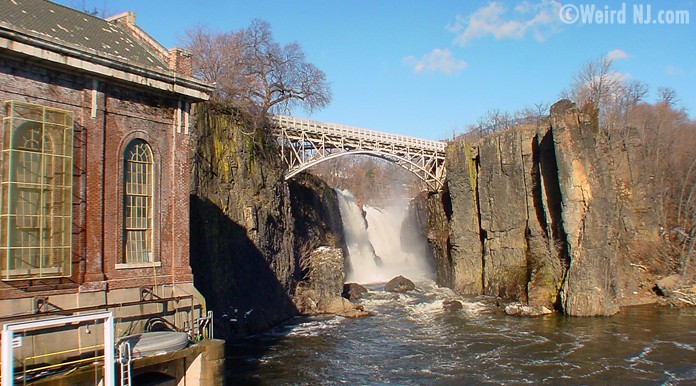 The Fall and Rise of Sam Patch

Although Samuel Patch was born in Rhode Island in 1807, it was right here in New Jersey that he would jump his way into America’s consciousness 20 years later. In 1827 Sam was employed at the Hamilton Mills Cotton Works in Paterson, when, around the time of his birthday, he announced that he would jump over the Great Passaic Falls. He set the date for Sept. 29th, the day that the new Chasm Bridge was to be erected across the span.

That Saturday, as a large crowd gathered to watch the bridge being placed, a group of police officers kept a watchful eye on Patch. Sam managed to elude their surveillance, only to reappear high atop the rocky precipice overlooking the falls. After a brief address to the audience, in which he praised the new bridge and its engineer, Sam prepared to jump. First, he removed his coat, vest and shoes. Then, laying them carefully at his side he paused for a moment, seemingly to contemplate whether he would again be needing the articles. Sam then launched himself from the 80-foot high cliff, arms at his side, and shot down into the turbulent river like an arrow. After a suspense-filled moment beneath the churning surface, Patch re-emerged to the jubilant applause of the spectators, and swam to shore unharmed. “There is no mistake in Sam Patch!” he proclaimed. The daring feat was reported in newspapers across the country, including The Saturday Evening Post. The legend of the “Jersey Jumper” was born. 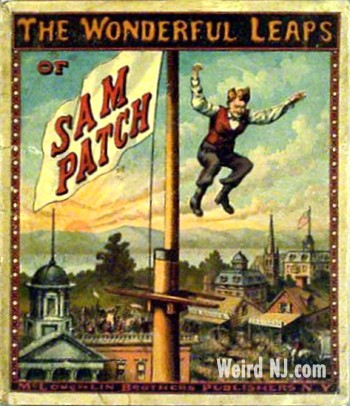 Patch would repeat his jump several times in Paterson, often passing a hat amongst the crowd to collect money. Then Sam began what he called his “Jumping Tour.” He jumped from a 90-foot ship’s mast into the Hudson River before a crowd of 500 in Hoboken.  He jumped from bridges, cliffs, and anything else on the East Coast that was high enough to look life threatening. Somewhere along the way he acquired a trained bear that he occasionally would persuade to jump with him. Then, in October of 1829, Sam would rise to the greatest challenge of his jumping career. Invited to upstate New York by a group of Buffalo hotel owners, the now famous Patch planned to leap over Niagara Falls. Standing on an island in the middle of the river, Patch waved to the crowds assembled on both the American and Canadian sides.  He then kissed the American Flag and hurled himself 130 feet down into the tumultuous river. The Jersey Jumper had become the first person ever to survive a trip over Niagara Falls. Just to dispel any doubts as to whether there was any mistake in Sam Patch, he did it again 10 days later.

For his next daredevil stunt, Sam announced that he “was determined to astonish the natives of the West before returning to the Jerseys.” Patch leapt over the Genessee Falls in Rochester, New York on Nov. 6th, “gracefully and fearlessly,” according to the account of one local paper. Sam planned to make one more jump in Rochester before returning home. He promoted this next exploit with a poster that read:

“SOME THINGS CAN BE DONE

AS WELL AS OTHERS.”

THERE IS NO MISTAKE IN SAM PATCH!

On Nov. 13, 1828, 10,000 spectators from the U.S. and Canada gathered to see Patch make the 125-foot jump into the Genessee River. Sam examined the abyss below him, then sprang from the cliff and began is trademark arrow-like descent. But something was different on this Friday the 13th, something was wrong. According to a witness, Patch “descended about one third of the distance, as handsomely as ever.” Then suddenly his body went limp, arms and legs akimbo. Patch hit the water at an angle, accompanied by a loud smack, and sank. 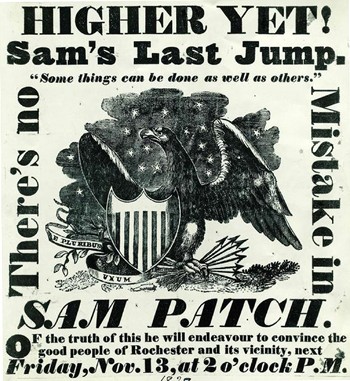 It was widely reported that Patch’s body did not resurface for four months when it was found by a farmer six miles down river, frozen in a block of ice. In actuality though, the corpse was recovered just two days later. An autopsy revealed that Sam had suffered the “rupture of a blood vessel, caused by the sudden chill of the atmosphere through which he passed to the water.” On his grave a crude wooden marker was placed baring the inscription: “Here lies Sam Patch, Such is Fame.”

But fame sometimes has a way of living beyond the grave, and the Jersey Jumper’s notoriety is one such instance. After his last fateful leap, Patch became something of a national folk hero. There were two plays written about him that toured the United States for years. The dramas, Sam Patch, Or The Daring Yankee, and Sam Patch In France, starred Danforth Marble in the title role and were wildly popular. It was also rumored by some that Patch himself had actually survived the Genessee Falls jump and was still very much alive, merrily leaping from one place to another.

In the 175 years since his first jump, the name Sam Patch has passed quietly into the mist of time. But The Great Falls area in Paterson still looks today much the way that it did on that September day in 1827. The Passaic still crashes mightily beneath the Chasm Bridge, then winds its way past the factory mills where the Jersey Jumper worked before his ascent to loftier perches. Gazing down through the shadowy crevasse and into the swirling water below, you can almost hear a faint echo over the roar of the falls. It rises up through the spray and seems to whisper in your ear, “There is no mistake in Sam Patch.”