The Wild Parrots of Edgewater

New Jersey wildlife is oftentimes surprising.  The residents of towns and cities in North Jersey may not know that bears and coyotes naturally inhabit the mountains and forests of our state.  And anyone who knows anything about the Pine Barrens knows that it is a unique ecosystem, which is home to all sorts of unique species, including a tree frog not found anywhere else.  But when it comes to weird wildlife, no town beats Edgewater. 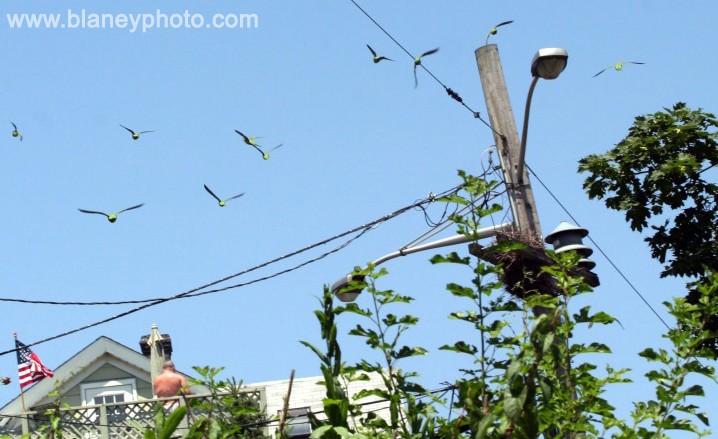 A flock of wild parrots native to Argentina have made there home in the small Bergen County community just south of the George Washington Bridge.  Though ornithologists predicted that the birds would spread throughout the state, crowd out indigenous species of birds, and destroy crops, no evidence of this happening has been found.

Probably the descendants of escaped pets, this species of parrot, known as the Monk parakeet because the gray patch on top of the green bird’s head resembles a monk’s hood, is the only one of the 358 know species of parrots that can survive the harsh NJ winters. They do this by huddling together in their communal nests to take advantage of their combined body heat.  As many as forty birds may occupy one of the multi-chambered nests, which can measure more than 6 feet long and 4 feet wide.  “It’s like an apartment building,” ornithologist Mark Spreyer told The Record in a July 23, 2001 article.  “They  share the nest, but each have their own apartment.” 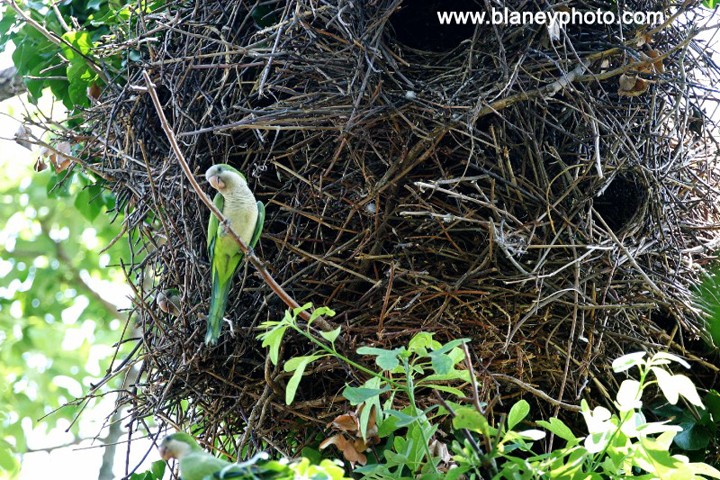 Locals say that the noisy, squawking birds have been seen, and heard, around town since the mid-1970s, and have taken up permanent residency in Memorial Park at the junction of River Road and Route 5.

“Everyone is enthralled with them,” Councilwoman Valory Bardinas told The Record.  “There are bird feeders everywhere.  We all try luring them.”

But not everyone is as enthralled by the industrious little birds as Ms. Bardinas.  Utility officials, wildlife experts and the Audubon Society have twice set out to destroy their nests, which are often built around power transformers, but the feisty feathered immigrants have wasted no time rebuilding their homes.  The way Edgewater is looking these days, a few more multi-unit dwellings probably won’t even be noticed.

Special thanks to Peter Marchetto for providing information for this story.

I was in complete shock when I read your story on the parrots of Bergen County.  My grandfather is the cause of those birds!  In the late 1960’s he became the Superintendent of an apartment building there.  He loved to breed fish and all different breeds of birds in one of the extra storage rooms attached to the apartment building.  He built cages lining the wall in the room, but in case of an emergency, he had a lever that opened all the cages so they could escape.  One day in the early 1970’s, while cleaning the cages, he slipped and hit the lever.  All the birds flew out the window, which he left open to air out the small room. 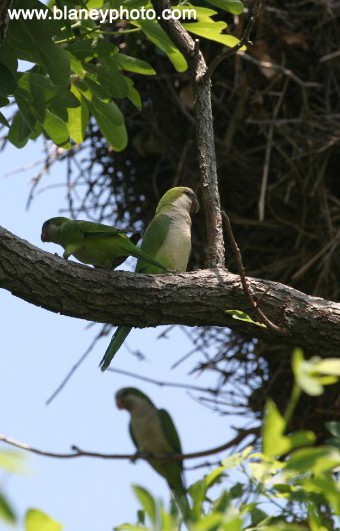 He only caught a few of the birds, and the rest died, except for the Monk parakeet, which he had three sets of.  Shortly after, my mother and aunts all noticed more of the birds showing up.  Right before my grandfather died, they were showing up everywhere.  Ever since then, they’re all over the County.

My mother used to tell me the story growing up to make me and my brother laugh.  I LOVE your magazine, and have been a huge fan for the past four years.  I can’t tell you how great it is to see a small part of my family history in your magazine.  Everyone in my family has their own copy of issue 17.  Thanks a lot, keep up the great work with your magazine, and my family can’t thank you enough for printing that story.

Hope that clears up the mystery, and good luck!   –Eliza D. 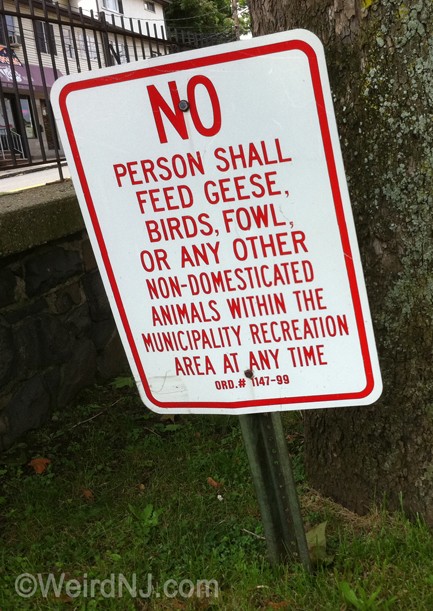 I was in the Edgewater Municipal Court last night and when I was leaving, I heard all these squawking sounds like parrots make. I looked up, and on top of a telephone pole directly across the street from the courthouse (at the corner of River Road and Hilliard Street) was a big nest made out of sticks with a bunch of parrots flying in and around it. They were green parrots just like you would see in a jungle. I thought it was a weird thing to see wild parrots nesting at a busy intersection in Edgewater, NJ. –Ron Aronds