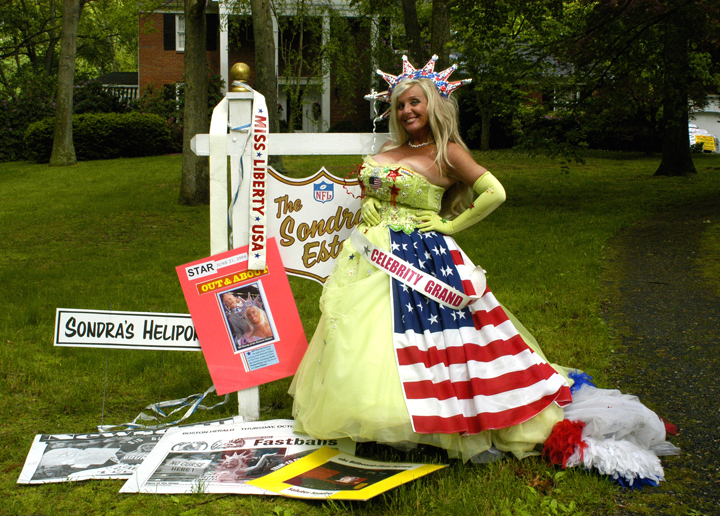 Story  and photos by Ryan Doan for Weird NJ

A couple of years ago, I was pulling an all-nighter at the Brick Kinko’s. Despite the steady injection of stale coffee and the occasional buzzing of other zombie patrons, I could not wake up––that is, until the atmosphere changed around me.

Where moments ago there had been the doldrums of everyone keeping to their business, suddenly there was a thunderclap of presence, a new burst of electricity in the air. Steamrolling into the place with her arms full of photos and documents, her flaxen hair fluttering behind her, was the smiling celebrity the Kinko’s staff knew all too well. Some call her Miss Football, others Miss Liberty, Miss Millennium, former Miss Super Bowl, Miss World Series, Miss NFL, Miss Body Beautiful U.S.A., Miss Opening Day. But Sondra Fortunato is something beyond her many titles; she is bigger than life itself. 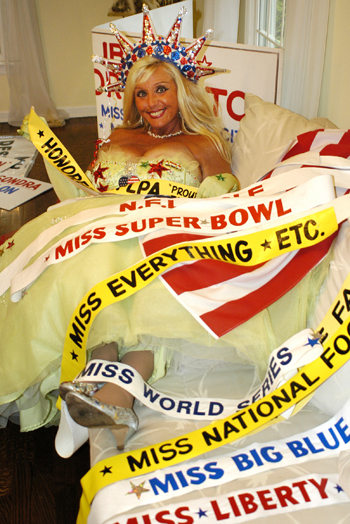 Chances are, if you live or spend any time in the Brick/Toms River area you already know of Miss Liberty (my favorite of her titles), or have crossed paths with her before. If you are a sports fan or frequenter of any local New Jersey parade, you are sure to have seen her.

Miss Liberty, a New Jersey socialite and one-time Playboy bunny, is not your typical debutante. A mascot of sorts for almost everyone’s teams, she spends her time frequenting professional sporting events throughout New Jersey and even nationwide, holding up signs rooting for the players, hoping to get camera time, and making a general spectacle of herself. According to Miss Liberty, many professional teams have even hired her to “cheer” for them and help fire up the crowd. And if you haven’t seen her at a local arena, don’t worry––she also drives a well-known car around NJ that touts her many titles from cardboard signs that have been carefully Scotch-taped to its exterior.

I recently had the chance to meet up with Miss Liberty, which was not an easy thing to do. She is very busy, and her schedule is as full as the top half of the red, white, and blue gown she often wears to her appearances. I would’ve visited with her earlier, but as her voice message clearly stated, she “had that thing with De Niro.” 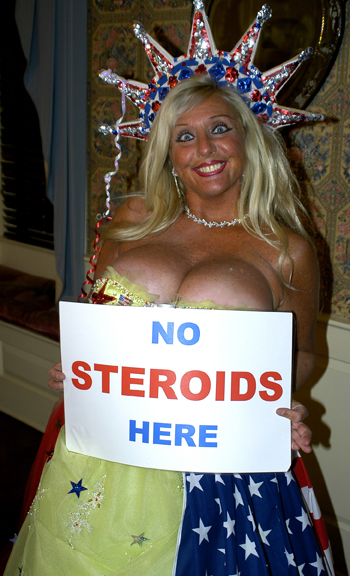 When I went to meet with her, Miss Liberty opened the door of the Sondra Estate in full regalia ––a green dress with a train and a Statue of Liberty crown. Several sashes were wrapped around her and many, many more were strewn over the floor. Laminated signs––literally hundreds of them––were piled everywhere. Here are some of my personal highlights from our conversation.

Sondra Fortunato: I’ve got to fix this dress. There is a malfunction. Well, you can airbrush it if you see anything you are not supposed to see. This is ridiculous. Vera Wang isn’t used to big busts, and these are real, too.

You have many titles––you are known by many names.

My titles, they’re all legit. I was honored by the National Football League Players Association in 2003; I’m the first and only female in the world [to receive that honor], so, I am very proud of that.

You’re the only one that holds that title?

Yes, that is correct. I am also in Who’s Who of American Colleges. I graduated from Trenton State College. I’m always a VIP guest at the NFL Draft and I go on the media and TV and I am the only female they chose. It’s fun. Fun life.

Do you live here alone?

Yeah, but I have a groundskeeper in the back upstairs. I have a girl that stays and cleans who comes one or two days a week. I also have family. My niece married the owner of Viacom. I love them, but don’t get to see them that much. I have a brother who is a heart surgeon. Then I have two sisters who are much, much older than me. I came after 25 years and they thought I was a tumor, my mother was so elderly when she had me.I was born with a veil. One out of a million babies are born with a veil. It means you are a little psychic, and I am. I do usually predict things. I thought Saturday would have been better for our shoot and look at all the rain today [Sunday].

You mentioned you know O.J. Simpson.

I’ve been friends with O.J. for over 20 years. I stood up after the press conference in New York with the 5,000 cameras, and I said, ‘Hey, everyone, don’t you think it’s about time now to bury the hatchet?!’ And he went, ‘Oh, my God! Bury the hatchet!’ Everybody just stopped. I didn’t mean it that way. Typical blonde, right?

I didn’t mean it, but I judge a person how I know them. But who knows? Only God knows and God is our judge with everything.

You are friends with Donald Trump too, aren’t you?

I like Donald Trump, he knows me, and he is a very nice man. Well, he knows who I am and would say hello to me. I’ll tell you what though, his girlfriend didn’t say too much. She didn’t look too happy when she saw me, I don’t know why.

You have been at this for such a long time. When did you first develop this persona?

Well, I’ll tell you what. When I was very, very, very, very young, I was on the beach. I must have been about 14, and this gentleman who was a former Mr. New Jersey came up to me and said that I should be on magazine covers. I said, ‘Oh, sure.’ And I started being on muscle magazine covers. That’s kinda how I got started. And then I won Miss Body Beautiful USA and then this and that. It kept going and going. It just kinda dominoed.

Many years ago, at one game, all I did was walk in and literally stop the game. Everybody stood up and clapped. That’s how I got started; that and Giants Stadium. I don’t know what it is that I have, but the people like me. My name means good luck in Italian. I’m not all Italian though; I am Swedish and Italian. But sometimes I don’t know about my luck; look at today. We had rain.

I was Miss Kentucky Derby, that was a while ago, and the funny thing was [a horse named] Swell put his head on my chest, and this is terrible to say, but he died of a heart attack after that and I never heard the end of it.

He died from putting his head on your ample bosom?

Yeah, he died happy. What a shame. What a beautiful horse. That was fun too. I have done so many things. I don’t know––New York Post, Daily News; I’ve been in probably every publication throughout the country. The press printed my address once and 90,000 people came. We had to call the police. My ex-mother-in-law said to me when we were guests of Bill Clinton that there is no sense telling people these things because they won’t believe them.

Once when I saw Tug McGraw, I said, ‘Tug, what do you think, I’m an oldie but goodie!’ He said, ‘I only see the goodies.’

You are most noticed around central New Jersey because of your sign-covered car.

It’s like Starsky and Hutch with that car. People see that car––they know I am behind it, I’m down the street, or I am next to it. It’s a little interesting that I do drive the car but, you know, to take all the pictures off and put them back on, with so many parades and appearances; it would take hours. I want to keep the car as an heirloom. Plus, I couldn’t sell it with all the tape on it.

The police are very nice and everybody honks, everybody toots their horns, waves, or blows kisses. They leave me love notes on the car. Of course there are one or two that maybe don’t like it. But you can’t please everyone, and I have a very good heart and I never get angry with anyone, because everyone is entitled to their opinion.

It’s amazing because the New York Giants are very conservative people and they do welcome me whole-heartedly, with all their heart, and they are a wonderful organization. I am ‘Miss Big Blue’ for the Giants’ road show. It’s run by Byron Hunt of the Giants, former Super Bowl Giant. Now they want me to be part of another Giants road show. Jets, Eagles, it doesn’t stop there. Ravens out west. The Raiders; I was a Raider girl.

Obviously, you travel a lot.

Yes, I do. I take the car everyplace because I feel better lower on the ground. When I do have to fly, my clients pick me up in a helicopter.

Tell me about the Sondra Estate.

A little history…My grandparents hail from Johnson and Johnson. I put a lot into this house and this house has been on the cover of so many newspapers and featured in so many magazines, like Home Magazine.

By the way, this dress is about three thousand dollars and I have about 32 of them. I just like people and they don’t have to be famous. I don’t fit in with everybody, but most people kinda understand me once they get to know me. I was born and raised in New Jersey. I have it in my blood, I guess. I love Weird NJ––so colorful, so different. Different! That’s why I think I would belong in it.

What a boring world this would be! 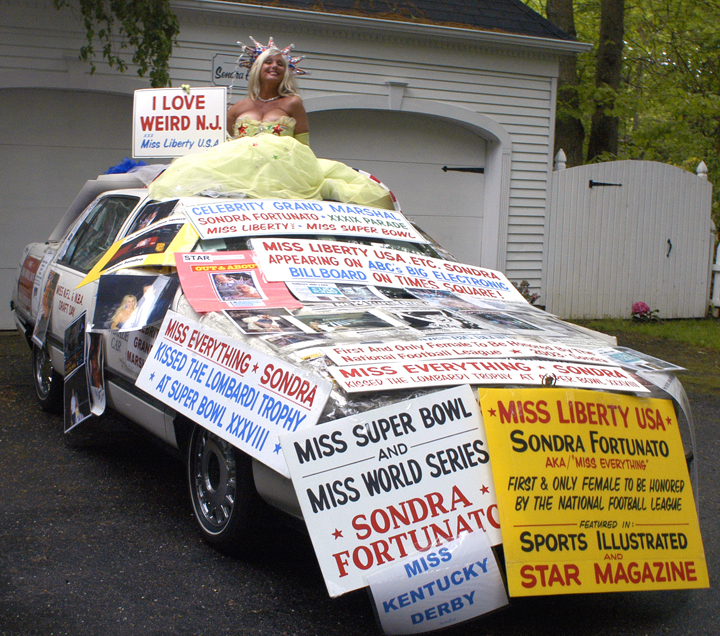