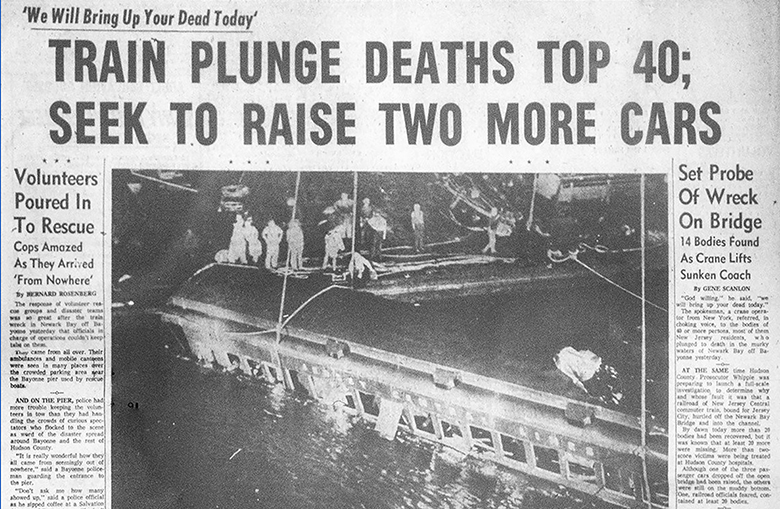 It was on September 17th, in 1958 that one of the most tragic railroad disasters in New Jersey’s history, which had occurred two days before, became a windfall of good luck for thousands of our state’s wagering residents.

A train wreck occurred on the Central Railroad of New Jersey on September 15, 1958, and was not only tragic but something of a mystery. The diesel-powered commuter train was traveling from Bay Head to Jersey City. To get to Jersey City from Elizabethport trains had to cross over a four-track Newark Bay drawbridge. It was here that the disaster took place.

As the train crossed the 1.5-mile span of tracks over Newark Bay it should have slowed to 22 miles an hour, but was it was doing nearly twice that speed. What nobody on the train realized was that drawbridge they were bearing down on had been partially opened to allow a dredging barge to pass beneath it.

Signals were lit to slow and then stop the train – the train however, did not stop. There were three signals spaced at three-quarters of a mile, a quarter of a mile, and 500 feet from the lift bridge, and an automatic derailing device fifty feet beyond the third signal that was in place to keep it from plunging into the bay. The train passed all three signals and hit a derailing device, but none of the safety procedures worked.

The automatic derailer was designed to knock the wheels off the track so that the resistance of the ties against the train’s wheels would bring a slow-moving train to a stop. But the train, although derailed, was moving at such a high speed that it didn’t have sufficient distance to stop before diving off the bridge.

Two locomotives dropped 40 feet and plunged into the murky waters of the bay, followed by the first two coaches. All sank immediately. A third coach, number 932, dangled precariously off the bridge for two hours before it too toppled into the water. The fourth and fifth cars stopped on the tracks and were spared the catastrophe. 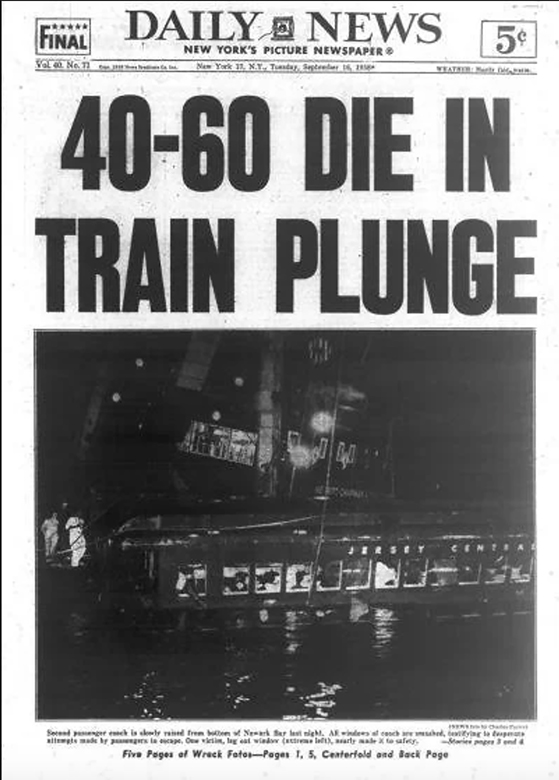 A search operation for victims lasted six days and included first responders from the Coast Guard, local fire and police departments, the Red Cross, Civil Defense, Salvation Army and local funeral directors. Divers recovered 48 bodies in all, including the train’s engineer and fireman. As the locomotive crew was killed, the true cause of the accident was never determined.

Reporters rushed to the scene to photograph the disaster. One front page newspaper photograph showed a passenger car being removed from the water by crane. In the picture the number 932 was clearly visible on the side of the coach. The photo appeared on page one of The Jersey Journal, Daily News and Associated Press on Wednesday, Sept. 17.

That grim scene and ill-fated digits would soon bring good fortune for betters in the numbers racket. Thousands of people in the area played the number in the pari-mutuel handle, the illegal lottery of the time. The following day the numbers 9-3-2 hit, garnering a record $50 million in payouts to an unprecedented number of winners.

Bookies throughout New York and New Jersey either went broke, into hiding or were 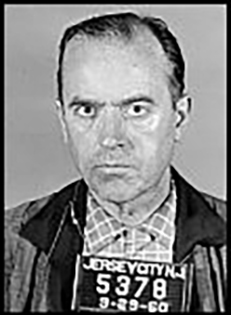 simply never heard from again – all except one, Joseph Vincent “Newsboy” Moriarity of Jersey City. Moriarty was somehow able to pay his gamblers in full.  Unfortunately, this proved to be bad luck for Moriarty, as it brought him to the attention of the FBI.

He was arrested for possession of betting slips and was placed in New Jersey State Prison. While Moriarity was locked up $2.6 million in cash was discover in the trunk of his 1947 Plymouth, which was parked in a garage at 47 Oxford Avenue in Jersey City. FBI agents seized the assets.

The Newark Bay drawbridge wreck still remains a mystery today. An autopsy found that the engineer, 63-year-old Lloyd Wilburn, had a heart condition, but that he had not died of a heart attack, as some suspected as the cause of the crash. He died instead of asphyxia due to drowning. No reason could be found to explain why fireman Peter Andrew, 42, did nothing to stop the train, despite the multiple warning signals he must have seen prior to the accident.

Subsequent investigations would find no malfunctions in the warning signals or braking system and concluded that human error on the part of the engineer was to blame for the disaster.

The secrets of that day died with the crew of the Jersey Central locomotive. Even the ill-fated Newark Bay lift bridge is now just a memory. Demolition of the central lift spans began in July 1980 after the U.S. Coast Guard declared the structure a navigational hazard. The trestle and approaches were removed in 1987–1988 when it became apparent that a replacement span was no longer feasible. Removal of the remaining piers began in 2012.