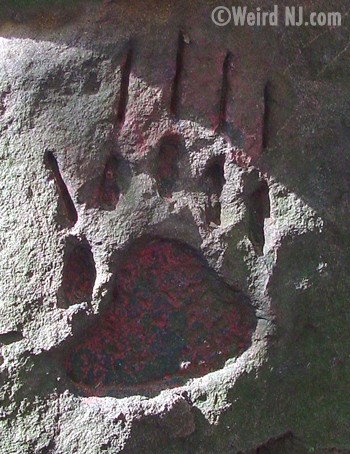 Petroglyphs, or rock carvings have never been fully documented in New Jersey, despite many surveys of Indian villages and shelters over the years.  Located along the Passaic River, below the 140-year-old Dundee Dam in Garfield, is a sandstone boulder with markings believed to ascribe to the Woodland Period, dating from 1,000 B.C. to the Native Americans’ first contact with Europeans in 1650.

The graffiti-marred stone has four carved symbols, a bear paw with claw marks, a fish, a phallus, and a set of initials.  The symbols are said to represent the fishing territory of a particular group, or a warning that bears also fished in these waters.  The phallus may suggest a sign to the spirits for an abundance of fish.

The bear paw and fish are similar in design, suggesting the same carver.  The phallus is believed to have been chiseled by another, possibly at a different time.  Archeologists in the area believe it’s a truly exciting find, since no other petroglyphs have been found in the area. 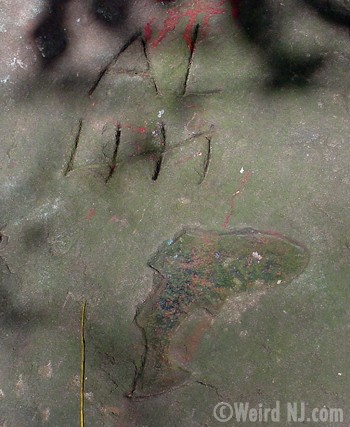 The meanings of the Garfield Rock Carvings are as much a mystery as when exactly they were made, and by whom.  Although the depiction of the bear paw, which is the most pronounced, seems to a Native American symbol, as does the phallus, the opposite side of the stone clearly shows the letters AL, and a score of five deeply etched into the boulder above the picture of a fish.  This would seem to say that someone named Al or with the initials A. L. had caught five fish in the river that day.  The fish appears to be jumping out of the water, and has a striking resemblance to the Field and Stream decals an outdoorsman might place on the back window of his 4X4 pickup truck.  Perhaps the bear paw and the phallic symbol were also carved by Al while he was killing time waiting for the fish to bite and feeling a bit randy.

On the other hand, the location was undoubtedly a popular fishing location for both the local Indians and the white settlers of the area, and the engravings may have been made years apart.  It is even possible that the ancient graffiti on the boulder might represent a turf war of sorts between the old and new cultures which shared the river for a time, adding their “tags” to the stone much like modern day gangs mark their territory with spray paint. 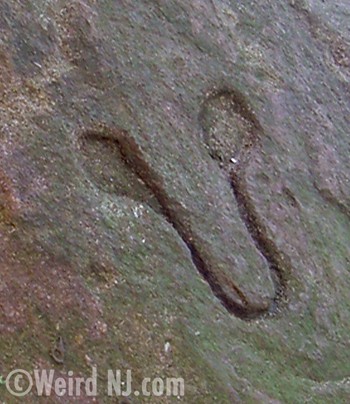 Are these carvings ancient, or just a work of art crafted by a hobo or perhaps a truant schoolboy many years ago?  We will probably never know the answers to this Stone Age question.  The last time we visited the site the rock was smack dab in the middle of an encampment of homeless people.  Apparently the river, and the carved stone, are still a draw for those who choose to live a primitive lifestyle.