The Devil’s Pathway at the Great Falls 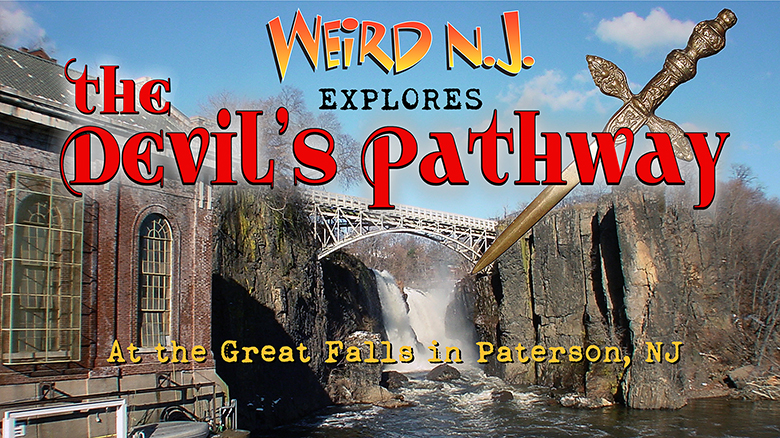 Descent Into the Devil’s Pathway

Life is a series of cycles of discovery, familiarity, forgetting, and rediscovery. The life of our state can be said to be something like this process as well. Sometimes, just when you start to think that there are no new frontiers to explore, you hear of one in the least likely place you would expect it to be. In some cases, our most intriguing adventures lie not in the uncharted terrain of some far-flung corner of the state, but rather in the oldest, most heavily developed urban areas.

I like to think of discovery as a stone tossed into a pool of still water: The waves of adventurous explorers will ripple out from the center of the splash to the farthest perimeters of the pond, then will reverberate back to their point of origin. In New Jersey, one such splash point is the pool beneath the crashing waters of the Great Falls of the Passaic River in Paterson. 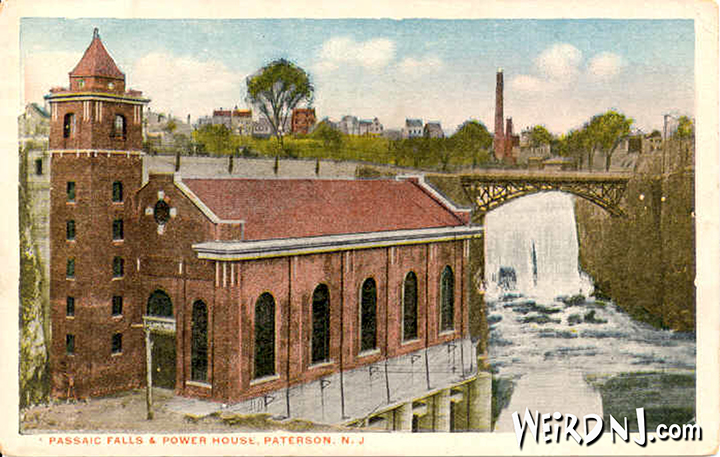 Paterson may be a rough and gritty town, but at its heart is the wild and primordial oasis of the Great Falls. Torrents of roiled water cascade down from the seventy-seven-foot-tall basalt cliffs, sending a swirling mist of spray up though the craggy chasm. Early Patersonians would eventually harness this power to run their mills, but they would never be able to tame its awesome force.

Down in the pools below the falls is another world. It is a world of light and shadow, mystery and danger. There the city ceases to exist and you find yourself in a rugged and potentially hazardous place. The only way to get to this lost and forgotten world is through a narrow and treacherous cleft in the rock known as the Devil’s Pathway. 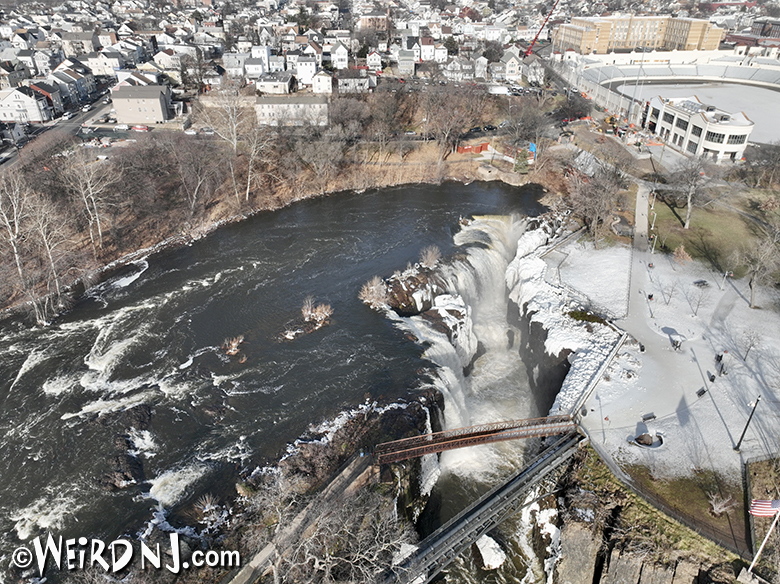 One Paterson native who has explored the Devil’s Pathway is artist and writer Nick Sunday. Nick called the Weird N.J. office in the early one winter’s day and asked us to visit the Devil’s Pathway with him. He said that four old golden daggers in the shape of crucifixes had recently been found in the pool at its bottom. Were we interested?

I don’t have to tell you what the answer was.

Before we visited, Nick told us that he discovered the pathway and the pool at its bottom by doing some research at the Charles Danforth Memorial Library:

“I read that the Lenapi sometimes referred to the waterfall as the ‘Totowa Falls.’ And that in their language, Totowa is defined as meaning ‘It is between.’ In one book, in parentheses after this phrase is written ‘River and Mountain.’ I realized that it was not the falls but the lake below the falls that the Lenapi named the Totowa. 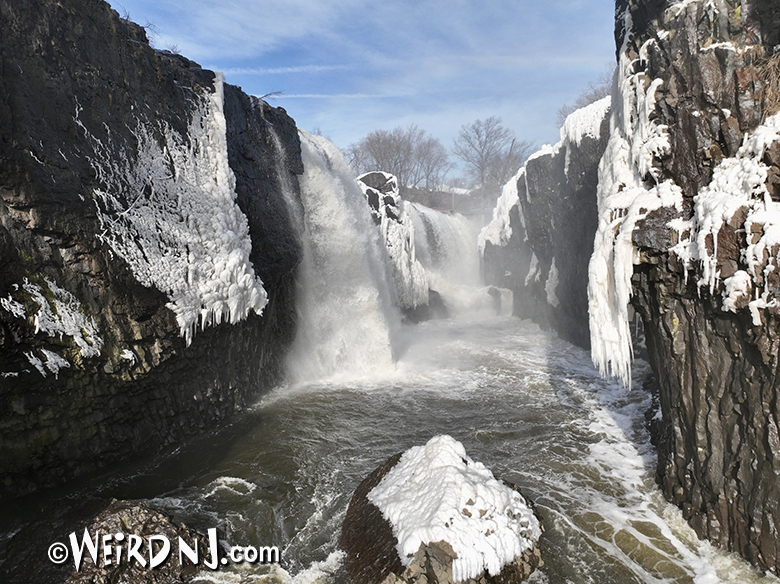 “A relatively recent book describes various methods to enter upon the shoreless waters of the Totowa. The book is written by a man named Longwell, and he describes a crevasse that cuts through the rock to a basin.

“I traveled halfway down the crevasse that Longwell names the Devil’s Pathway and saw that it led to a pool just above the lake. The Totowa’s height is adjusted by a huge hydroelectric plant there, and I suspect that the pool above the lake has been revealed only because the power plant has kept the level of the Totowa quite low.

“The sound of water falling is the only sound that can be heard. The surface of the lake is remarkably still, just as Longwell described it.” 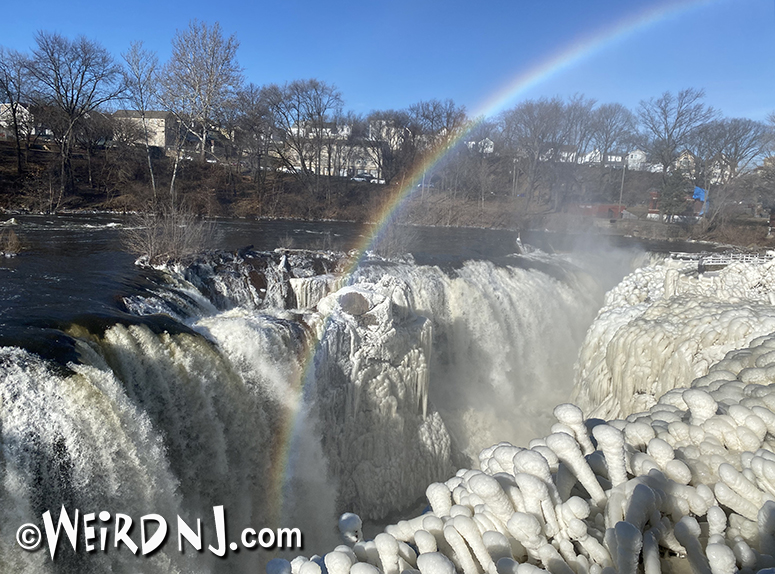 Nick knew the operator of the hydroelectric plant, and that’s how he was introduced to the four mysterious daggers. The employee had found them in the pool of water at the base of the Devil’s Pathway. We asked Nick more about the find.

So what do you make of these daggers? What kind of metal are they made of?

It looks like a bronze or a brass. It wasn’t gold. I believe that they were probably used by priests. They went down there, Catholic priests. 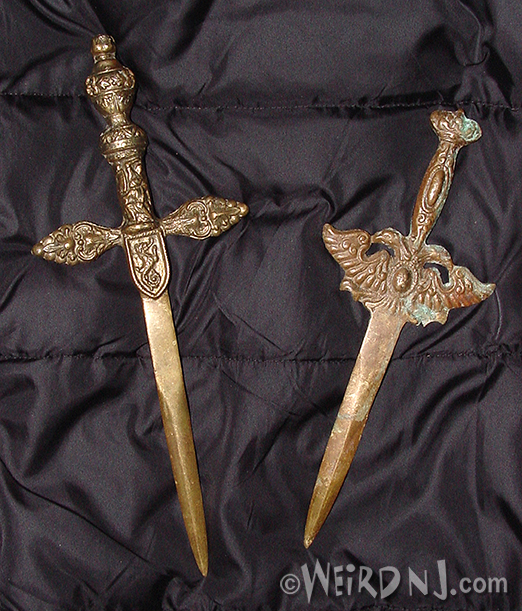 In what time frame are we talking about here?

Probably around the turn of the last century. The Devil’s Pathway is sort of like a sacred place—it takes some doing to get down there. The priests could have been Greek Orthodox, and the Devil’s Pathway could have been used for some sort of ritual, or exorcism—just because of that name. The falls is a mystical place. Your senses are suspended. You don’t hear airplanes or cars. All you hear are the falls. It sort of changes you, and I guess it would be a good place for a ceremony.

Do you think that the daggers should be in a museum or a historical society?

“They should be. But they belong to the guy who found them—they’re his. I guess he doesn’t want to give them up. I think he would hand them over if he were to be recognized. He’s the only guy on the job over there at the power plant. He knows every inch of those falls and the Devil’s Pathway.

“It’s extremely dangerous if you’re alone. But if you’re with someone, it’s just a little mountain climbing. It’s wide enough, and you can see your way through. It’s not like you’re gonna slip and fall. You’ve just got to be careful. It would help to have a little rope. If something happens—you know, if you slip—you want someone to be there. You don’t want to take any unnecessary risks. 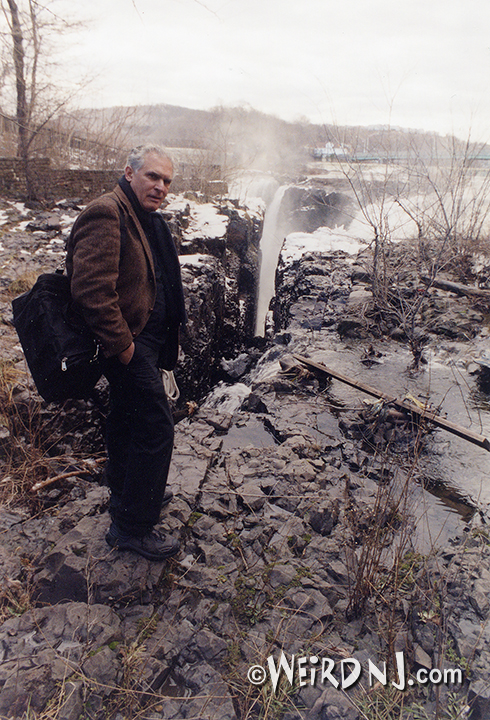 We set up a date to meet Nick a couple of days later at the top of the Great Falls. It was bitterly cold, and the Passaic River was at full volume as its foamy cascade plunged into the gaping maw of the crevasse, crashing angrily onto the monstrous boulders below. Nick appeared right on time. He looked to be in his mid-fifties. His bushy grey hair, brown tweed blazer, and black wool scarf made him look more like an Ivy League college professor than an urban explorer. As we shook hands, he apologized for the water that was trickling into the path we were to take through the falls. He had assured us that the Devil’s Pathway would be dry.

We went over a fence of black iron spikes and down to the crest at the top of the falls. A white mist rose from the chasm and enshrouded us as we stood perched at the edge of the precipice. A treacherous glaze of ice and slime coated the dark, wet rocks on which we stood, poised before the abyss.

It was at that point that Nick, holding a few flimsy lengths of rope in one hand and a camera bag in the other, raised one arm and pointed to a cleft in the walls of the cliff.

“There it is,” he said at the top of his lungs so he could be heard over the din of rushing water, “the Devil’s Pathway. It leads all the way down to the bottom. You ready to go in?” As he said this, he jumped into the cleavage of stone and began to scurry farther down the crack. 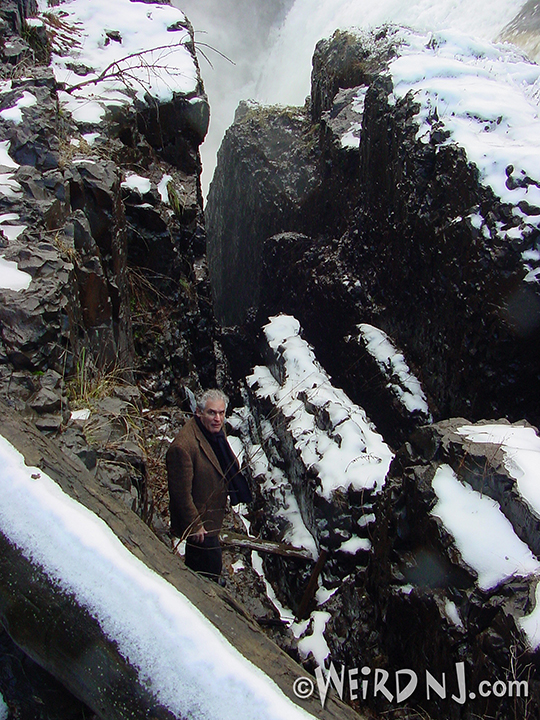 We began to wonder whether Mr. Sunday might actually be insane. A steady stream of river water flowed into the narrow pathway from above, and the mist rising from the tumult below started to envelop him when he was only a few feet away. And just where did he think he was going anyway—we wondered. If the pathway did in fact lead to the bottom of the plummeting falls, then that was the last place we should be headed!

“Nick,” I yelled, “I think I’ll wait until next spring!” We decided that we might learn more by talking with Billy DiPillo, the man who discovered the mysterious daggers, than we would from charging headlong into the jaws of a watery grave. So we left Nick to his exploring and walked over the chasm bridge to the power plant.

Billy has run the plant virtually single-handedly for decades. He welcomed us into the impressive 1902 brick building, and we asked him some questions about his time spent on the river. 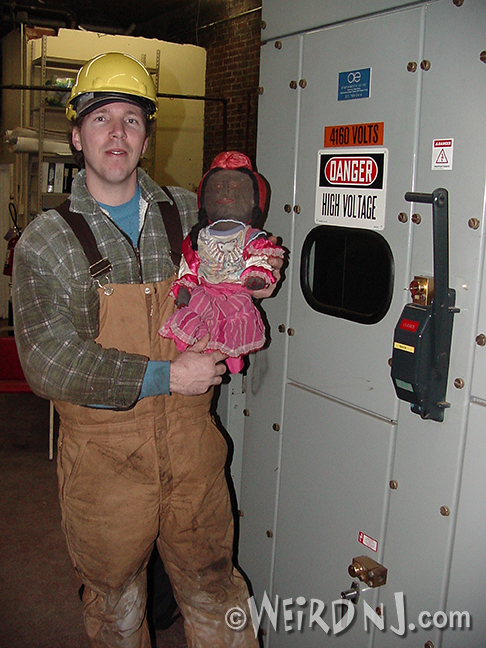 What can you tell us about these daggers you found?

That’s actually Saint Michael on this one. He’s the one that slew Satan.

Do you have any theories about them?

Nope. The thing is, they must have been put down there. They couldn’t have been thrown, because they would have all ended up in different places, don’t you think? And then, how did they stay there? We keep two hundred cubic feet of water per second going over that waterfall. That’s a lot of pressure and a lot of movement. These just ended up in one spot. I’ve seen parts of cars, refrigerators, everything come down this river. And it all ends up being moved.

Were the daggers tarnished when you pulled them out?

They were greened up. I just cleaned them up a little bit.

Have you pulled anything else interesting out of the river? 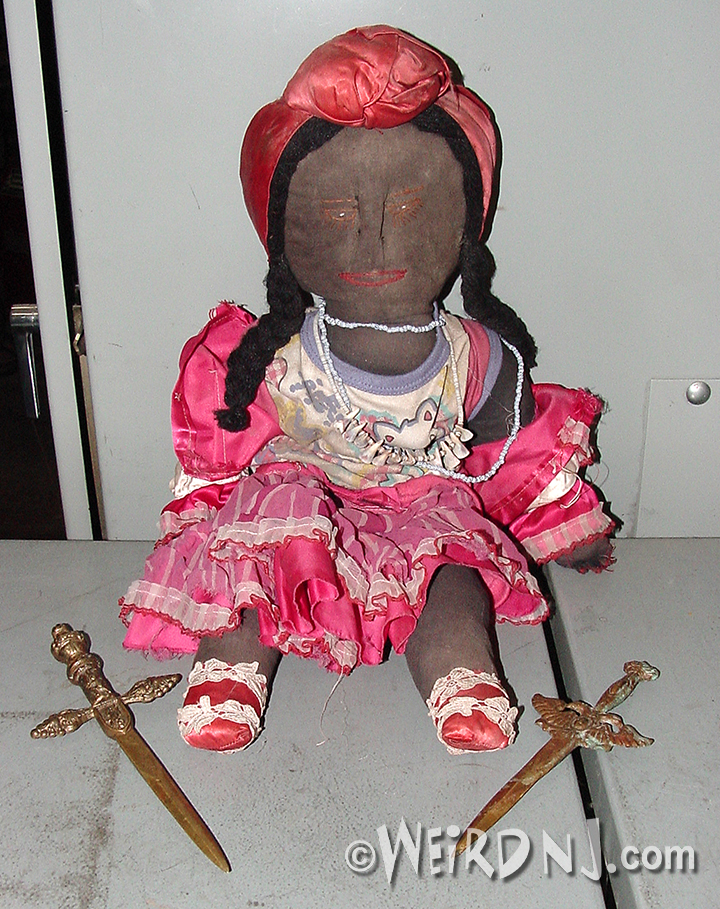 Well, we pulled this doll out of the water. It was wrapped up in clear plastic and gagged. It had a ribbon across its mouth. The hands were tied behind its back, and the legs were also wrapped and tied. I asked some people about it. They say it’s a voodoo doll. Ninety- nine percent of the people I’ve talked to say, “Get rid of it.”

What other strange and mysterious artifacts might still lay  beneath the crashing waters of Paterson’s Great Falls waiting to be discovered? That question can be answered only by those adventurous (or foolhardy) enough to brave an expedition into the Devil’s Pathway.