For those of you who are wondering just what Weird N.J. is all about, let us try and explain. Weird NJ is a travel guide and magazine to places you won’t find on state funded maps or located on any tourist attraction pamphlets.

In Weird N.J. we travel to places that are seen for what they are; weird, odd or unique, all told by New Jerseyans to Mark Sceurman and Mark Moran, publishers of Weird N.J., while traveling the backroads of the Garden State in search of local unwritten history and modern folklore.

When we travel the state of New Jersey, we are looking for tales told only inside the perimeters of a town. These stories and places tell a story that cannot be found in any history books and are not often perceived as “history,”…until we arrive.

The Weird NJ journal also has interviews with people we meet along the road who we feel have a story to tell, and stories sent in by subscribers telling their own Weird experience living in New Jersey. We also feature Weird N.J. News, a collection of newspaper articles compiled over the year, and the usual selection of places you may not want to visit, including underground tunnels, sewer drains, abandoned property and other sites that are brought to our attention at the local diner or “old man bar.”

Some of these sites deal with haunted dwellings, graveyards, UFOs and Bigfoot sightings, but that is a small part of what we are trying to accomplish. Our main goal is to record what people think or remember as being weird or odd in their town. It could be anything from a lawn filled with bowling balls, to an abandoned Nike missile base right in your backyard! 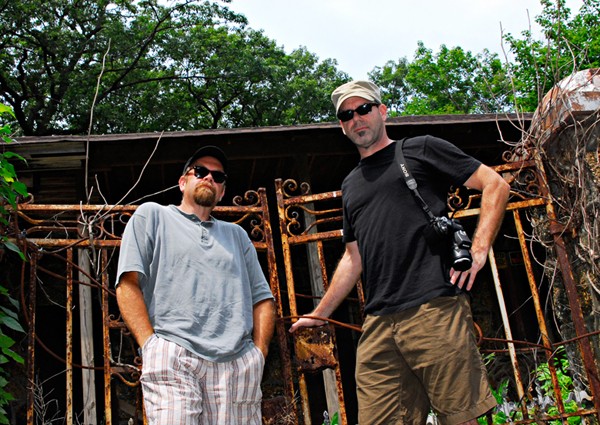 Many of the sites we’ve recorded you can actually go see. Some are told just in legend, but never before recorded for publication. Some sites you cannot visit, but we thought you’d like to know they exist…somewhere in New Jersey.

The Weird N.J. newsletter started in 1989, self-published and sent out to just a few subscribers who somehow got ahold of our mailing address. Since that time we’ve published nine issues, once a year, and the mailing list keeps growing with each issue. Since all of the early issues are out of print, we are traveling back to some of the earlier sites and updating the history of these “odd” places, and photographed many of these sites. If you know of a place that you think belongs in Weird N.J., sent us a note. We’ll be glad to check it out.

One might think of a “weird” site as something mysterious, possibly forbidden and better off left alone for others to trespass on. There have always been “Dead Man’s Curves” and places associated with local legends that come and go with generations. Fortunately for New Jersey, almost every town has their own unique brand of weirdness.

The collection of sites you’ll find in upcoming issues are a culmination of interviews, letters and traveling miles of highways seeking out what New Jerseyans consider weird and unique about their state. We’ve met some incredible people along the way, and all of them had a story they wanted to tell. 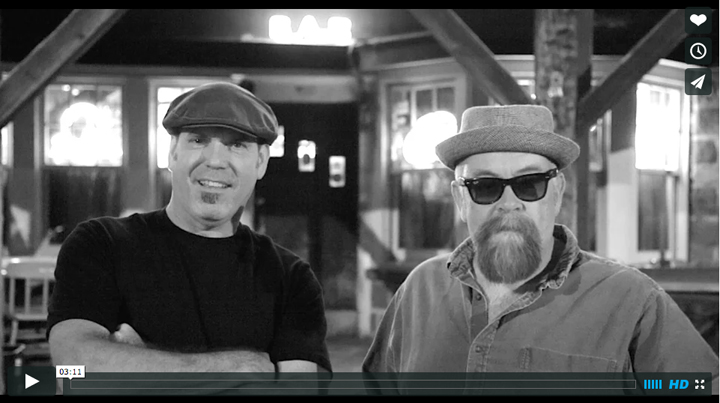 How did you guys hook up?

MS: Mark and I corresponded for a few years by mail regarding weird NJ places and WNJ in general. I thought his stories were perfect fodder for my fanzine, and when he sent me some of his photography, I was really impressed. It was dark, moody and captured that eerie feeling that was missing in WNJ. I gave him a call and said “let’s take a road trip,” and spent the day photographing various New Jersey weirdities. We ended up drunk at the Franklin Tavern in West Orange where we decided to spearhead the occasional issue of Weird NJ into something we thought would really give the Department Of Tourism a run for its money.

MM: I first became aware of Weird NJ when I heard Mark Sceurman doing a radio interview on WFMU. I thought that the concept of the newsletter (which WNJ was at that time) was great. As a New Jersey artist and photographer, I had been exploring similar subject matter to Mark in my own work, seeking out what was visually weird about our state. I got on Mark’s mailing list, and soon began contributing pictures and stories of my own to the magazine. Before long, Mark and I began taking weekly road trips together in pursuit of the strange, and soon realized that we were of a like mind in our fascination with New Jersey’s offbeat side. Eventually Mark asked me to co-publish the magazine with him, and when I regained consciousness, I got up off the floor and jumped at the opportunity.

Were you into this stuff when you were kids?

MS: I was always into local history, and more importantly, the “underside” of history. Stories that aren’t really well known or talked about. My first weird site was told to me by my brother Lee, who with his crew of friends would descend upon Albino Village in Clifton on a Friday night to scare the beejesus out of each other. Then they’d go to Rutt’s Hutt for a hot dog.

MM: Some of my most vivid recollections from childhood are the feelings that I would get while exploring someplace where I knew I was not supposed to be. Abandoned places have always held a certain fascination for me, and possess a kind of mystery that becomes tangible the moment that you enter them. Trying to unravel the hidden (or forgotten) history behind such places can be a real thrill, and makes for some fun detective work.

Were you ever really, really spooked by something?

MS: I was spooked at the Hunt House. I actually felt the hair rising on my back. And that was just from telling us the story. I saw a doorknob turn back and forth once at a friend’s house. My wife’s parents’ house was spooked with something also. Glasses would fly all over the place and my father-in-law woke up once with a dish towel choking him! I think their lineage goes back to the Jackson Whites. (Or that’s what they tell me!)

MM: Not something, as much as some people. It can get kind of weird sometimes when you’re talking with a person, then all of a sudden you realize that they have a completely different perception of reality than you do. Then you think to yourself, “this person is on a whole other planet than I am, anything could happen right now!” Some people really do exist in an alternative dimension, and when you interact with them, it can give you an uneasy feeling. Fortunately though, most of the people that we’ve met have been really friendly to us (regardless of what planet they may call home).

Have you ever been in a truly dangerous situation researching this stuff?

MS: We were once approached by a watchman with a very large poodle at The Gates Of Hell, but no, I’ve never been stuck, wedged in a cave or anything like that. Outside of the occasional trespassing violation, we stay out of trouble. We’re historians you know. We don’t go to these places to drink beer.

MM: There have been instances when I’ve perceived certain situations as potentially dangerous, but we’ve always managed to escape unscathed — so far. We face the threat of being arrested more often than the risk of coming to any bodily harm. But the majority of law enforcement officials that we’ve crossed paths with have usually been supportive, even helpful, to us in what we were doing.

Do you ever debunk anything, or do you just not consider it weirdworthy?

MS: The word “weird” means many things to the people we encounter. In our business, we ask you what you think is weird. We don’t profess to be the high exalted rulers of weird, but we do have our standards. We won’t print urban legends because that could apply to any town, anywhere. We look for some factual information somewhere, even if it’s just a “grain” of truth. Who really wants to debunk Demon’s Alley when the legend is much more romantic.

MM: We’re not in the business of debunking. We listen to what people tell us that they think is weird, and if it’s interesting to us, we’ll investigate it. Sometimes we can dig up additional information on a story, other times we’ll just use it as it was related to us. We’re primarily interested in great stories, if there happens to be a grain of truth in the tale, then that’s all the better.

Mark Moran plays a mean guitar. Were you ever in a band?

MS: He plays guitar so mean I think he sold his soul to one of the 16 New Jersey Devils. I also play a few instruments: guitar, piano, drums, and the latest band I’m in is called Your Mama. A sort of Dada polka punk band that really gets the toes tapping. I play trombone in the band. Not very good trombone though. We play a few gigs during the year but the stage always gets slippery from throwing all the kielbasa around.

MM: For many years I was in an imaginary band. I recorded my own music under the moniker of Mark and the Mastodon, and played all of the instruments myself. I would record the songs onto a four track tape deck, then about twice a year, I would release the material as a cassette album. I was just one of many people who work in this way. New Jersey has quite a wealth of unique home recording artists, and some of them are really very talented.

Do you personally believe in things supernatural or paranormal?

MS: Of course. The world is full of mysteries that will never be explained. The problem is weeding out the crazies and the deliberate hoaxers. We throw them into Weird NJ!

MM: I don’t know if I really believe in all of that stuff, but I don’t disbelieve it either. There are a lot of things in this universe that we don’t fully understand. To say that I don’t believe in something, just because I can’t comprehend it, would be kind of ignorant. Two hundred years ago, nobody knew that radio waves existed. three hundred years before that, everybody thought that the Earth was flat. So who really knows what we may just accept as commonplace in the future? Perhaps someone will invent a special pair of goggles with which we can see ghosts. Or maybe we’ll actually capture a living Jersey Devil! Anyway, it’s a lot more fun to keep an open mind about these unexplained phenomena than it is to dismiss it all as hogwash.

What did you guys really want to be when you grew up?

MM: At various times in my life I have wanted to be an archaeologist, an artist, a writer, and a photographer. Now, thanks to Weird NJ , I guess that I’m a little of all of these things. 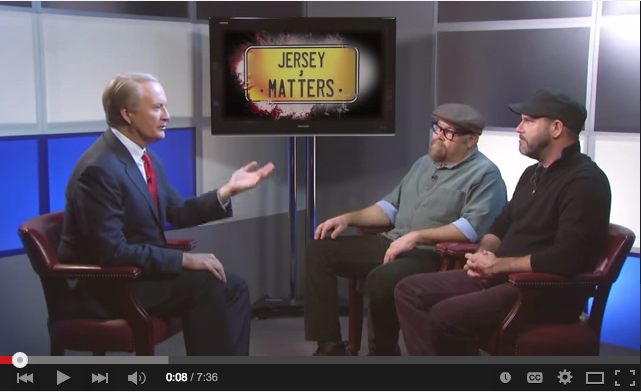