We’ve received quite a few letters about an unusual area in Double Trouble State Park, on the border of Berkeley and Lacey Townships in Ocean County, where all of the trees had apparently been pushed down in a strange circular pattern by some unknown force.  The next three stories are eyewitness accounts of the scene.

Is it the landing site of a UFO, or an airplane crash?  Or was it perhaps ground zero for a meteor strike or where a freak tornado touched down unobserved?  Nobody seems to know for sure, but that’s not going to keep us from guessing.

A few years ago my wife and I went kayaking down Cedar Creek in Ocean County.  About a half a mile after you pass the Garden State Parkway you can see that the woods off to the left look like they were cut down in a big circle.  All the trees were pushed down, but not cut cracked or broken, just bent right down to the ground – full size pines!  All of them were bent outwards toward the perimeter.  There was no debris from a plane crash, access roads for equipment or anything. There was also no hole in the center from a meteor.   –John 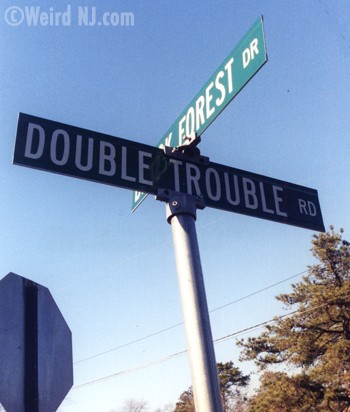 Recently I went canoeing in Double Trouble Park on Cedar Creek.  Our teacher told us to stop at a cleared area in the left hand side of the creek.  The park rangers, local police, state police and such were there the day before we went.  People called the police complaining that strange lights were coming from the area.  The FAA thought a plane went down there, but one didn’t.  The weird thing is that whatever landed there pushed the trees down so flat, yet the object that pushed them did not destroy them.  The dimensions are pretty big and it’s a complete circle.

It is a very creepy spot and if you have a digital watch or take a photo it won’t show in the picture and your watch or compass will go crazy!  –Justin S.

I go to Jackson Memorial High School.  My school takes a canoe trip for each junior class every year.  I went to Double Trouble State Park this year for the trip.  The trip started off bumpy, we were hitting into trees every 5 feet.  The creek was very narrow, only fifteen feet wide.  Later on my partner and I got set back about fifteen minutes.  We finally caught up to everyone else, who had pulled over on the side of the creek and were out of their canoes.  I asked the teacher what everyone was doing.  He told me that there was said to be a UFO landing site, and pointed over to the trees.  I looked into the trees and saw a single circle of trees with complete gray sides to them.

We parked our canoe and walked into the woods.  As I walked in I took out my digital camera that I had just bought the week before.  The night before I charged the batteries for twelve straight hours.  I had never once had a problem with my batteries not charging.  I walked into the huge area of trees.  I looked around and it was a perfect circle.  All the trees in the middle of the circle were dead, gray, and flattened, and all of them were broken.  Around the circle were gray trees also, but all the trees behind them were completely alive.  The trees surrounding the circle were bent outward on a slant, all an the same angle, almost as if they were fake.

I couldn’t see any human machine doing this and doing it so perfectly.  I turned on my camera to take a picture.  As soon as I turned it on I saw the screen indicating that it was dying, and then it shut off.  I tried several more times and it kept shutting off, until it wouldn’t even turn on.  I thought to myself that it was strange, but just left it to the chance that my charger wasn’t working the night before.  I packed up my camera and we left the area to continue our trip.

About a half hour later we stopped once again for a rest.  I took out my camera to see if I could get one more picture of my partner and I.  I pressed the button and turned it on, expecting it to shut off again.  This time there were no signs of a dead battery.  I thought it was strange.   –Strato Chic

For more stories of unexplained happenings and mysterious sites around the state see our book Weird NJ: Your Travel Guide to New Jersey’s Local Legends and Best Kept Secrets.

For more information on the Tunguska event, an enormously powerful explosion that occurred near the Tunguska River in Russia in 1908, go to this LINK.