Legends of the Blue Hole 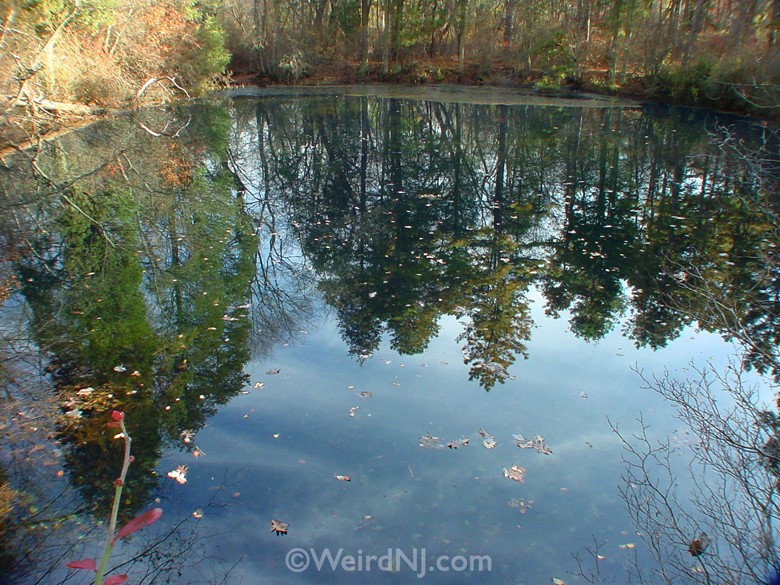 One of the most storied sites in all of southern New Jersey is a mysterious body of water known as the Blue Hole.  Located deep in the Pine Barrens of Winslow, on the border of Camden and Gloucester Counties, this small but legendary pool is said to not only be bottomless, but also a frequent pit stop of the Jersey Devil.

Though its icy blue-tinged water might seem inviting, especially on a hot summer day, locals warn their children to stay away from the Blue Hole and to never go swimming there.  Tales of unexplained whirlpools which suck down hapless swimmers have long been part of the Hole’s lore.  Some who have been lucky enough to escape its clutches have claimed that they actually felt something, perhaps the Jersey Devil himself, pulling them down into the chilly depths.

The bottom of the Blue Hole, if indeed there is a bottom, is said to be made of a fine sand, sometimes referred to as “sugar sand,” which locals liken to quicksand.  When we visited the notorious Hole we found ourselves navigating through narrow pineland trails made up of this same treacherous sand.  Sure that at any moment our Jeep would get hopelessly bogged down, we decided to ditch the vehicle and continue our quest on foot.

It was a beautiful autumn day as we wondered the wooded paths of the Winslow Wildlife Management Area.  The underbrush was awash with bright cranberry-red and golden colored leaves, and the sound of birds chirping filled the sweet smelling air.  As we approached the Blue Hole though, the atmosphere seemed to change.  The birds were heard no more and in their stead was an eerie silence.  The quiet was soon shattered however, by the echoes of shotgun blasts from a nearby firing range which rang through the tranquil forest.

The surface of the Blue Hole was as still as glass, and a thermometer that we’d brought to measure its temperature read a chilly 50 degrees Fahrenheit.  Although the water was crystal clear we could see no signs of life in the Hole what-so-ever; no fish, no insects – nothing.  There was something unsettling about this void, and suddenly it seemed easy to imagine why people might warn their children not to venture into these waters.

Although it might have a bad reputation now, this was not always the case with the Blue Hole.  In the 1930s the site was a popular picnic spot and swimming hole amongst the locals.  In the 1940s though, a storm washed out a wooden bridge over the nearby Egg Harbor River, cutting off the main access route to the Blue Hole.  Ever since then it has remained isolated in a dense forest of scrub pines, accessible only by foot or off-road vehicle.

The Blue Hole is approximately 130 across, almost perfectly round, and has steep banks.

Its waters remain curiously cold, even in the hottest summer months, averaging about 58 degrees.  Unlike most bodies of water in the Pine Barrens, which bear a coloration similar to tea due to the high content of iron, tannic acid, and suspended sediment,  the water of the Blue Hole is perfectly clear.

There are several theories as to how the Blue Hole came to be.  Some say that it is the result of a meteorite striking the Earth.  Others claim that it is what geologists call a pingo.  A pingo is a small body of water which is the result of an ice mass which forms beneath permanently frozen soil during an ice age.  The ice mass expands for thousands of years then breaks through the permafrost to create a depression rimmed by a hill.  When the climate warms, the ice melts, forming a pool.

But what about the fabled whirlpools, or what the locals refer to as “whirlypools,” which are said to drag down unsuspecting swimmers to their watery graves?  How could such a current exist in such a seemingly placid body of water?  One explanation for this might be that the Blue Hole is fed by ground water, not the nearby stream.  This fact accounts for why the water does not contain the same murky color as the river, and might also be the reason for the mysterious surges of current.

Scientific rational does little to lessen the mysteries of this curious body of water though, which seem to run as deep as the Blue Hole itself.

Now you can have all of your favorite Weird NJ icons on all kinds of cool new Weird Wear, like Tee Shirts, Girls Tees, Sweatshirts, Long Sleeve Tees, Hoodies, Unisex Tanks, Kids Tees, Tie Dyes or Onesies! All are available in all sizes and a variety of colors. Show the world your Jersey pride in some of these Jersey-centric goodies. Represent! (Theme song by Ricky Bustamante)