The Dark Invader and the Black Tom Explosion 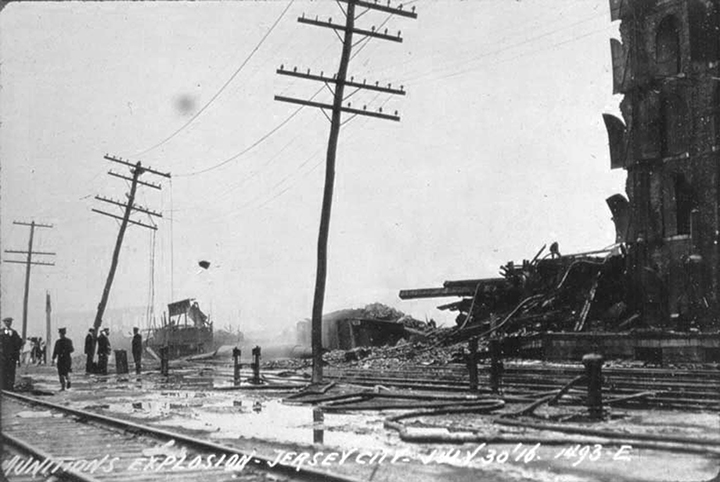 It was 2:00 am, July 30, 1916, and all was quiet in Jersey City. Despite a great war raging throughout Europe, most residents of the New York metropolitan area, along with the rest of the nation, lay in their beds secure in the knowledge of America’s isolation and supposed neutrality. All of that was about to change however, and the belief that most Americans held of their country’s invulnerability was about to be shaken to its very foundations.

The Black Tom warehouse in Jersey City operated as the main overseas shipping depot for munitions destined for Great Britain, France and Russia. Seventy-five percent of the nation’s armaments left the Black Tom dock. Named for its shape, which was said to resemble a monstrous cat’s head and neck, Black Tom was a twenty-five acre, wind-swept

outcropping of rock which jutted out into New York Harbor from the swampy shores of Jersey City, near the Statue of Liberty.  Although the United States’ official policy about the war at this time was still neutrality, its sympathies were with the Allied powers against Imperial Germany. This made Black Tom a prime target for sabotage. 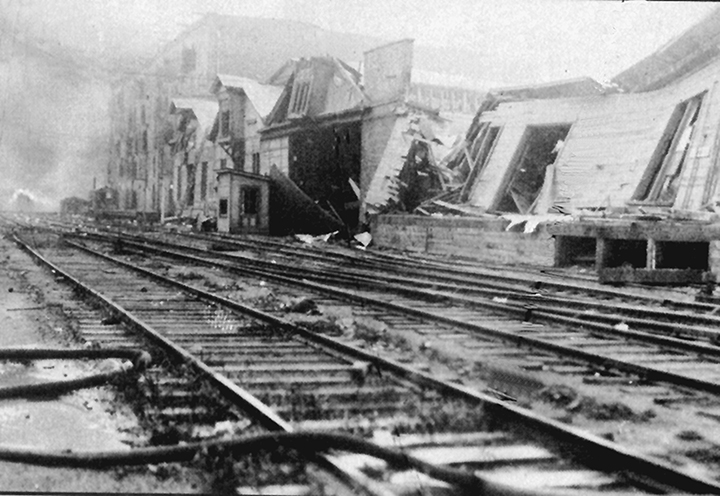 German intelligence was sent to the New York area to infiltrate the docks and set up an operation to destroy munitions cargo ships bound for Europe. One person, arriving under the alias of Emil V. Gache, (who became known as “The Dark Invader,”) employed men

from New Jersey to make what were known as “cigar bombs,” a prototype of the modern pipe bomb. The shop was set up in a German vessel along the docks and the bombs were placed in the hulls of the ships. Cigar bombs often took about five days to ignite, causing many ships to burn at sea.

It is often said that the German saboteurs tried to spare the lives of the sailors. The cigar bombs would start a fire, forcing the captain of the ship to flood the munitions compartments, but at the same time giving sailors enough time to flee the ships before they sank. Their intent was to just stop the flow of ammunition across the sea. 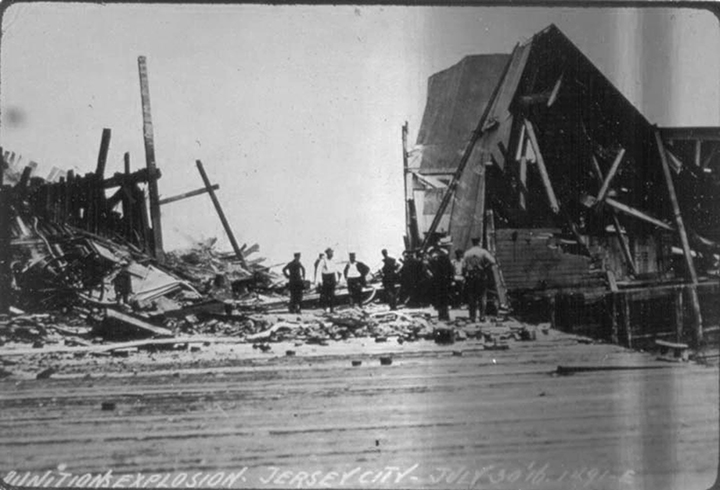 In 1915 Germany announced that all ships sailing the Atlantic were subject to war, and on May 7, The British liner Lusitania was hit by German torpedoes off the coast of Ireland,

killing over 1,200 passengers. The Dark Invader ceased his operations after a “bomb squad” (the first of its kind) was formed to investigate the sabotage being done along the docks. When one of the cigar bombs was found in a hull, and authorities started questioning who Emil V. Gauche really was, The Dark Invader left for Europe, but was apprehended by the British. He surrendered as a prisoner of war. 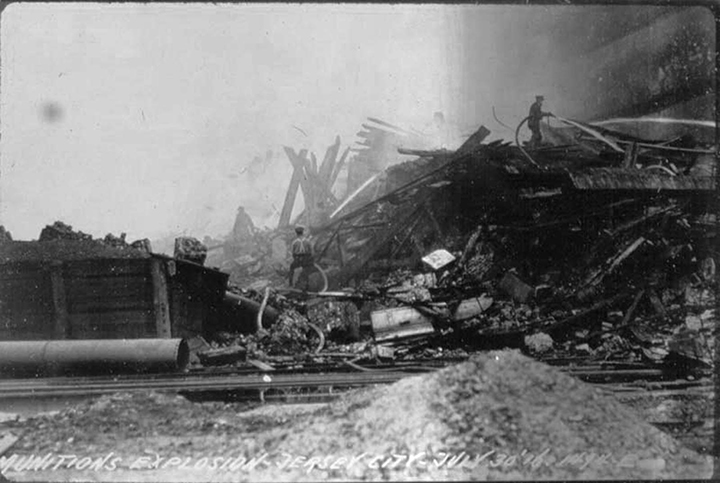 There still is a cloak of secrecy about what happened on July 30, 1916. It is said that three

Visit our shop for all of your Weird NJ needs: Magazines, Books, Shirts, Patches, Hats, Stickers, Magnets, Air Fresheners. Show the world your Jersey pride some of our Jersey-centric goodies!

men were seen making their way along the Jersey City’s Black Tom docks at midnight. It is now believed that they set timed fuses and then fled the area.  At 2:08 am, five million people were awakened by an explosion that was heard as far away as Maryland. The shock threw people from their beds in Deal, and shattered skyscraper windows in New York. Thousands of ammunition shells shot across New York and New Jersey, lodging in buildings and and trains. The Brooklyn Bridge swayed. After the initial explosion came a series of smaller ones. Barges full of high explosives ignited. There were showers of shrapnel and glass. Evacuation of nearby towns and Ellis Island began, and the military was called in to stop any looting that might occur.

Every window in Jersey City’s town hall was destroyed, along with many churches, businesses and homes.

Disoriented men, women, and children ran out into the streets in their nightclothes to witness a huge red fireball rise up from Black Tom to illuminate the city like a hellish, Dante-esque inferno.  A ten-week-old Jersey City boy named Arthur Tosson was killed when the force of the explosion threw him from his crib.

The entire damage from the blast was estimated to be $20 million, not counting the $5 million in munitions loss. The explosive power of the Black Tom blast was unequaled in terms of such a force so close to a major U.S. metropolitan area.

In April of 1917 the United States would enter the war in Europe, making it the first World War, but the first American blood was spilled right here in New Jersey nearly a year before when Black Tom was destroyed. After 20 years of investigations and charges, Germany was found responsible for the explosion, though they continued to deny any involvement, blaming the blast on everything from spontaneous combustion, to the night watchmen lighting fires to fend off the dreaded New Jersey mosquitoes. Final reparations would not be settled until 1979. 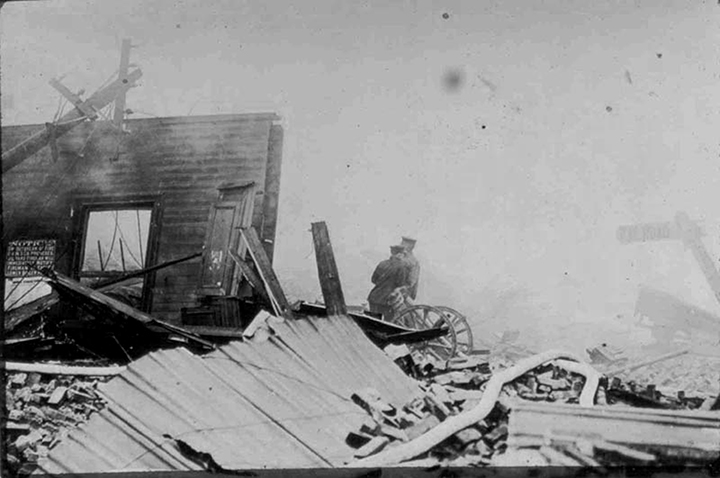 Today Liberty State Park is located at ground zero on the site of the explosion, though few of the park’s thousands of visitors realize the historic impact of this powder keg once known as Black Tom. 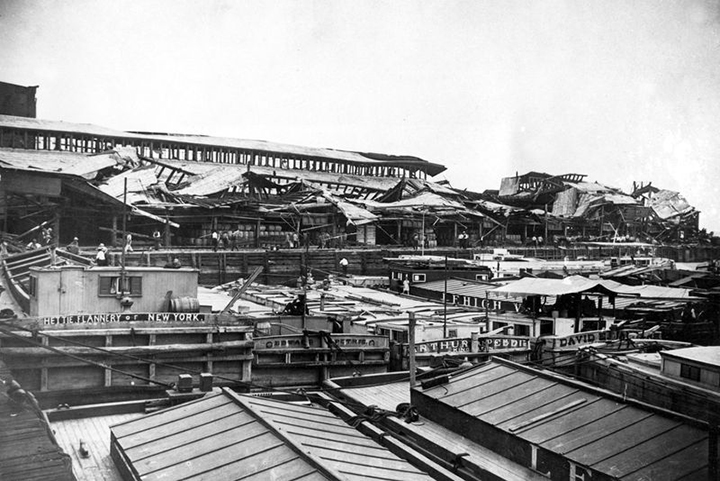 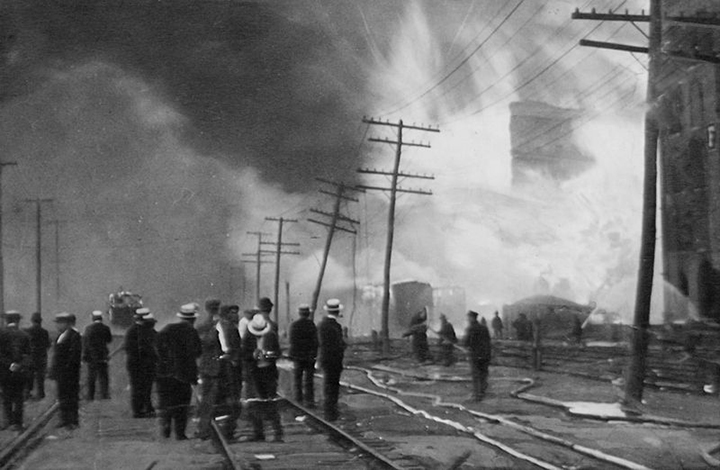