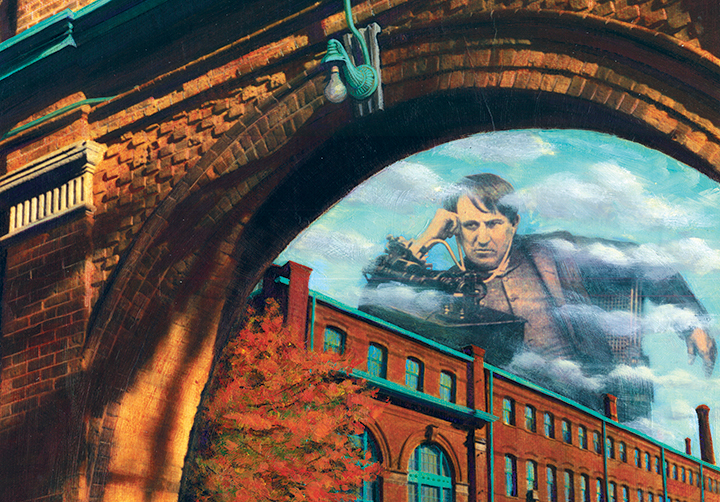 Few people would argue with the opinion that Thomas A. Edison is one of the most influential figures of the past hundred years.  Just try to imagine the Twentieth Century without recorded sound, motion pictures, or even electric light, and you will realize the importance of Edison’s contributions cannot be over estimated. His thousands of patents on virtually everything that we now think of as every day necessities made Edison a giant

of the Industrial Age.  All of these wonderful inventions that basically define the modern era were of course developed right here in New Jersey, first at Edison’s Menlo Park laboratory, then later at his West Orange factory. For all of his greatness though, Thomas Edison did have his faults, foibles and failures.

It has often been said that the reason Thomas Edison, perhaps New Jersey’s favorite son, was so successful as an inventor was because it was impossible to convince him that there were any limits to what he could do. His reputation for denying any impossibilities was legendary. According to Edison biographer Robert Conot: “Edison succeeded because he was an eternal optimist who would not let himself or others consider the possibility of failure; because he was an unconventional thinker, who accumulated the resources that enabled him to transform his ideas into reality; because he charged ahead when others hung back; because he demolished the opposition and bowled over impediments.” 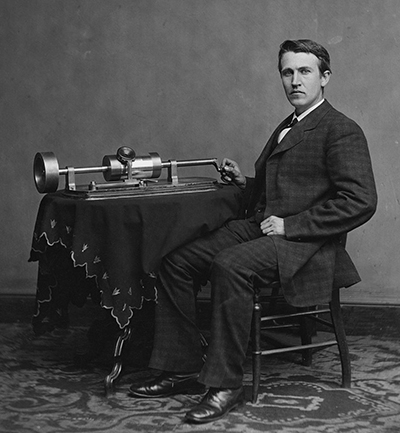 patents in US history at 1,093), in the long run it also led to some situations that qualify not only as failures, but as downright weird.  For example, in 1878 Edison briefly wound up associating with an organization of mystics known as the Aryan Theosophic Society, where he discussed the role of science and technology in mysticism with their leader, Madame Elena Blavatsky.  While Edison left the group (and even went on to deny ever associating with them), these experiences got him thinking about different eastern religious ideas, particularly reincarnation.

Perhaps because of his well-known bravado, or perhaps out of plain old ignorance, Edison saw no reason why he couldn’t find a practical way to reincarnate the dead.  He also didn’t see anything odd about it.  In 1920 he told Scientific American, “I have been at work for some time building an apparatus to see if it is possible for personalities which have left this earth to communicate with us. If this is ever accomplished, it will be accomplished not by any occult, mystifying, mysterious, or weird means, such as are employed by so-called ‘mediums,’ but by scientific methods.”

Better than just reincarnating them, Edison believed that one could converse with the

dead. “I am inclined to believe that our personality hereafter will be able to affect matter,” he said.  “If this reasoning be correct, then, if we can evolve an instrument so delicate as to be affected, or moved, or manipulated by our personality as it survives in the next life, such an instrument, when made available, ought to recover something.”

His theory was that memory was the basis of a human’s character, and that memory was composed of small physical particles.  These particles defined intelligence, personality, and everything else about a person.  Edison thought that these particles were from outer space, and formed in swarms and transplanted themselves within people’s minds. Death, therefore, occurred when these “little people” (Edison thought each particle had its own consciousness) disagreed amongst each other. 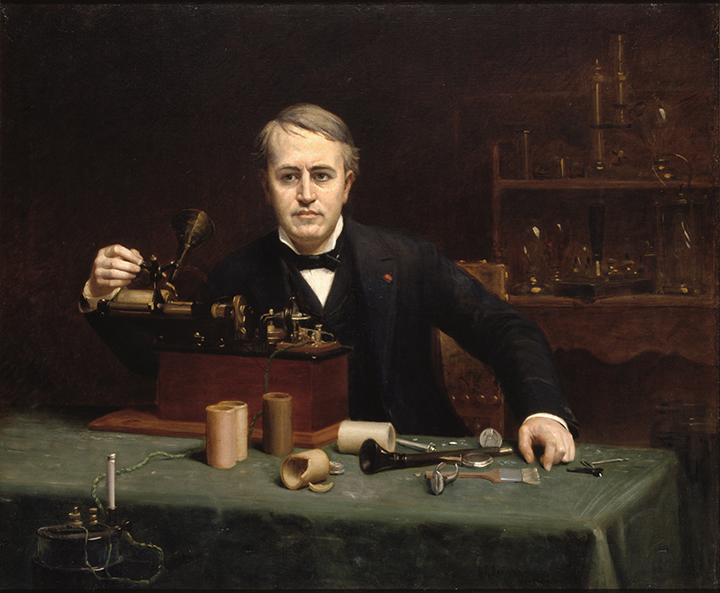 “They fight out their differences,” he said, “and then the stronger group takes charge.  If the minority is willing to be disciplined and to conform there is harmony.  But minorities

sometimes say: ‘to hell with this place; let’s get out of it.’  They refuse to do their appointed work in the man’s body, he sickens and dies… and they are all free to seek new experience somewhere else. When we ‘die’, these swarms of units, like a swarm of bees, so to speak, betake themselves elsewhere, and go on functioning in some other form or environment.”

Edison theorized that if the exact same group of particles could be put back together, then a dead person’s personality would return (because each person’s pattern of small particle people was unique). He used photographic plates in an attempt to chart these swarms of little people particles, but never succeeded in reanimating a person, or as was his ultimate goal, allowing them to talk from beyond the grave. 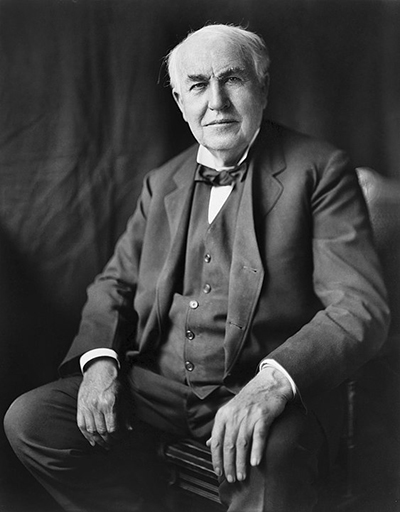 “If the units of life which compose an individual’s memory hold together after ‘death’, is it not within range of possibility, to say the least, that these memory swarms could retain the powers they formerly possessed, and thus retain what we call the individual’s personality after ‘dissolution’ of the body?” Edison asked during an interview for American Magazine. “I am hopeful, that by providing the right kind of instrument, to be operated by this personality, we can receive intelligent messages from it in its changed habitation, or environment.”

Edison even had one of his workers helping him from beyond the grave. When one of his colleagues died during the early phases of the project, Edison believed it could only help his quest.  “In that he knew exactly what I am after in this work, I believe he ought to be the first to use it if he is able to do so,” Edison stated shortly after the man’s death.

It seems ironic that Edison would be so preoccupied with listening to the dead, when his near total deafness kept him from hearing even the living. He said that this handicap, which he never sought to rectify through his inventions, actually helped his thought process, as it helped screen out unwelcome interference from the outside world. 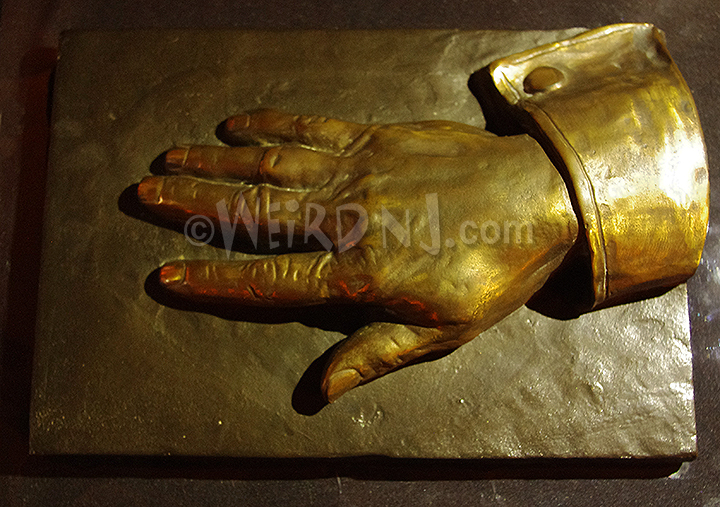 A bronze cast of Thomas Alva Edison’s right hand made after his death (above). Edison’s death mask (below).

Eventually, Henry Ford convinced Edison to see a parapsychologist, and through him Edison found a new hobby in attempting telepathy. After this obsession found its way into the inventor’s heart, his experiments in talking to corpses severely dropped off.  He didn’t 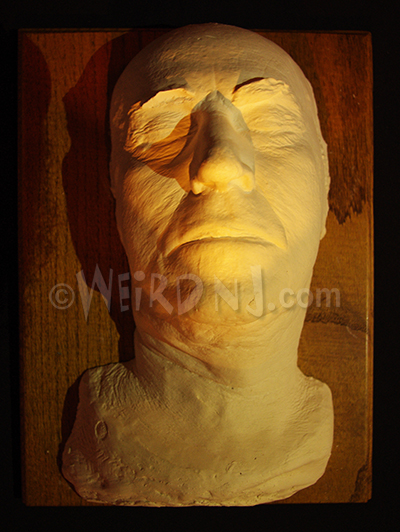 go completely mainstream in his pursuits however, as he conducted many experiments in which he wrapped electrified coils around his own head, and the heads of his guests, in his efforts to telepathically communicate.

Thomas Edison died in his West Orange home in 1936, before his dreams of communicating with the dead could ever be realized. He left behind thousands of notebooks and millions of papers filled with his thoughts and ideas, and researchers are searching through these papers for evidence of his quest to speak with the dead even in the present day.  Who knows what might have happened if Edison had lived a few years more?  Perhaps instead of his contributions to our daily lives consisting of simple light bulbs and summer action flicks, we could entertain ourselves through electro-shock induced telepathy with our departed loved ones.