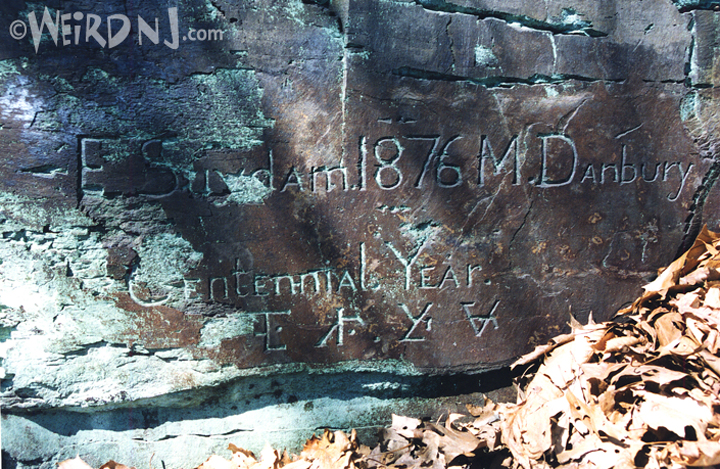 It is often the case that when the past speaks to us in the modern world, its messages are written in stone. Sometimes these voices from long ago provide a record of a lost and forgotten civilization. Trying to decipher the hidden meanings can be as frustrating as trying to piece together a jigsaw puzzle with missing pieces, and doing so without the benefit of a picture to work from.

The fact is that we just don’t know for sure the meaning of many of these cryptic inscriptions which have been handed down to us through the misty veils of time. Some will undoubtedly be forever shrouded in mystery, and continue to be the subjects of speculation and conjecture for generations to come. 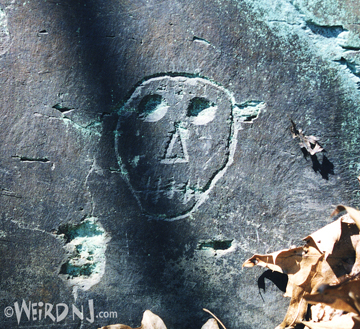 Located on the New Brunswick embankment of Weston Mill Pond, a slow moving section of the Lawrence Brook, can be found strange symbols carved into the red sandstone that back to 1876. Nobody to date has been able to decode them. The etched symbols look like letters of some kind, but do not seem to be of any known language. Weird NJ met up with Mark Nonestied of the Middlesex County Cultural and Heritage Commission, who took us along the path that leads to the mystery symbols, and filled us in on what he thinks they might be.

“The carvings are very fine. Obviously they knew what they were doing,” Nonestied said. We noticed the similarity in the carving style to many of the gravestones from the era when these inscriptions were made. This, along with the fact that the riverside cliffs showed obvious signs of being quarried at one time, lead us to speculate that the chiseling graffiti artists were perhaps tombstone carvers by trade.

There are other carvings along the brook that depict skulls and crossbones, and other messages from the 19th century, including the words “Red Rover,” the name of a popular pirate novel of the time. Nonestied noted that the town of East Brunswick also got into the graffiti business.

“In 1976, the East Brunswick Bicentennial Commission added their insignia to these rocks, but they had a hard time digging into the shale.”

Upon reaching the site, Nonestied said that there might be a simple explanation of the symbols, but that secret will be forever kept by the carvers.

“Maybe it says ‘Drink At Jacob’s Tavern,’” we mused.

“The names carved above the symbols were New Brunswick residents. They were found in some census records. But why they did this no one knows.”

“The ‘Red Rover’ carvings are on the New Brunswick side and rather difficult to get to. You’ll see their names again, and a skull and crossbones, but not these symbols.” Nonestied noted, referring to the mysterious letter-like code.

These ancient carvings have withstood the test of time, weather, and the re-damming of the river. What the symbols signify will most likely remain a mystery for the ages.

You can read more about other curious carvings found around the state in Weird NJ magazine, “Your Travel Guide to New Jersey’s Local Legends and Best Kept Secrets,” which can be found on newsstands throughout the state and on the web at www.WeirdNJ.com.