The Holy Holy Altar and the Witch’s Well 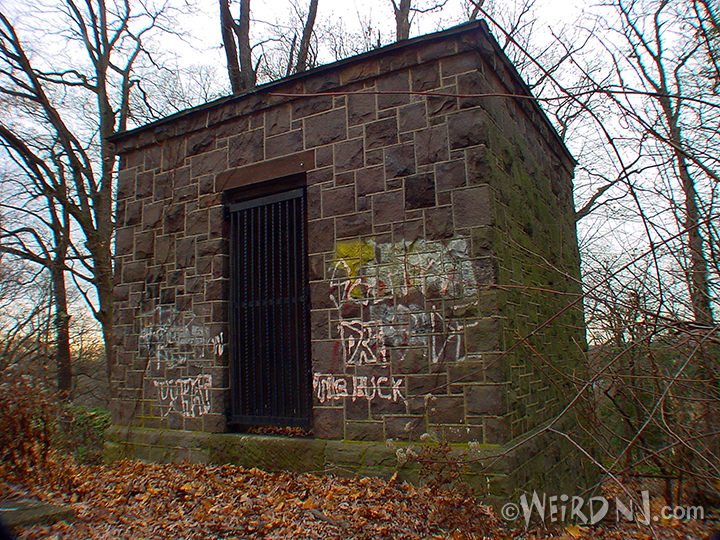 Old pump houses seem to inspire some of New Jersey’s best folklore.  In addition to the legends of the Dempsey House and the thumping pump houses of two different Heartbeat Roads, there is a local legend in Mt. Holly (Burlington County) of a pump house known to late night adventurers as the Witch’s Well.   It is located on the side of a wooded hill known as the Mount, right near a mysterious stone altar called the Holy Holy.

mountain.  I’ve seen the altar and it’s really strange, because it’s up on this woodsy hill after which the town of Mt. Holly was named. The altar is a big stone sucker with the words Holy Holy Holy inscribed on the front.

When I was a kid, back in the early 70’s, there was a story that the Jersey Devil was chained up inside that altar, and if you put your ear to it, you could hear his chains clanking and scratching against the stone.  It was also told that the altar was the capstone for a deep shaft that went all the way to Hell. 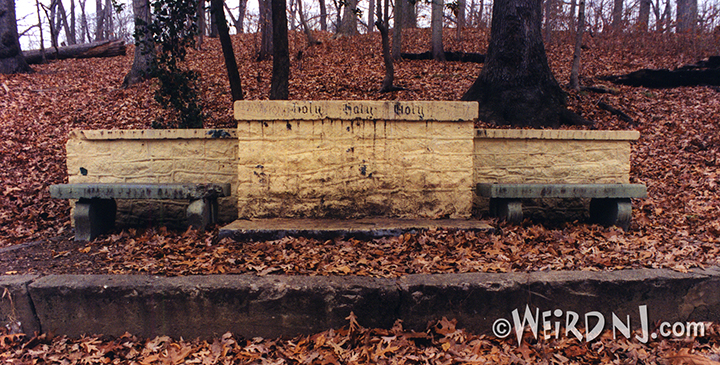 There’s an old graveyard, Mt. Holly Cemetery, right down the hill from it on Ridgeway St.., though you can’t really see it from the altar.  There’s a gravestone in there… it was in the front of the graveyard, on the left side, if you enter from Ridgeway St.  The grave was of a young woman. It read something like, “Thus is the fate of all who turn from God,” and it was said that this was the woman who summoned the Jersey Devil. He killed her, and was caught and chained up inside that altar. –Ken N.

Laid out is a huge white concrete table (4 feet by 8 feet by 4 feet), almost like a sacrificial table of some sort.  It has the words “Holy Holy Holy” written across it.  In front of the slab are old wooden benches, more like telephone poles, set in a square.

The actual slab appears to have a seat on either end of it. Located on the other side of the Mount was an old shack that you could bang on the door and I swear it would knock back!  Well the town decided to fence it off which didn’t stop the kids from climbing over and harassing the old witch who lived inside. Then, for some strange reason, in the middle of the night the front door of the shed was barred with black iron bars.  Now you cannot get near enough to knock. –Steve S.

The Mount and the Witch’s Well of Mt. Holly

There is a place located in Mount Holly called the Mount. The first happening that comes to mind from here is the Holy, Holy, Holy.  It is an altar that is located in the woods.  This site is where they hung witches, or people that the town believed where witches.  The altar is actually an old judgement table.  You can still see where the gallows pole was where they were hung.  The pole was cut down, but there is a piece remaining.

Off to the left of the Holy, Holy, Holy is the Witches’ Well.  If you follow the trail to the left you will run into it.  Supposedly, before the gallows were put up, there was a witch who started the whole practice in the town, who was thrown down this well.  The witch wasn’t killed instantly.  She screamed and banged on the inside of the well walls until her hands were bloody, begging to be helped.  After she died, the towns people used to hear her cries for help, and the sound of her bloody knuckles rapping on the walls. They later built a shed over the top of the well to end the haunting.  It is said that if you go there at night and knock on the walls of the shed, you can hear her knock back for help. –Ghsthntr1978

I Hear You Knockin’ but You Can’t Come In

My husband grew up in and we live in Mt. Holly hearing about the Witch’s Well and he knocked on the door a few times with friends and they always heard the knocking back.  Well, one night, they found the door unlocked.  Once inside, they saw the well and there was a ladder in it.  Of course they had to climb down.   –Andrea

The Witch House IS scary and I did knock on the door when it had a door, and that thing knocked back!  It would knock back like 2 or 3 seconds later, sometimes longer, and the suspense was a rush.   –Colin