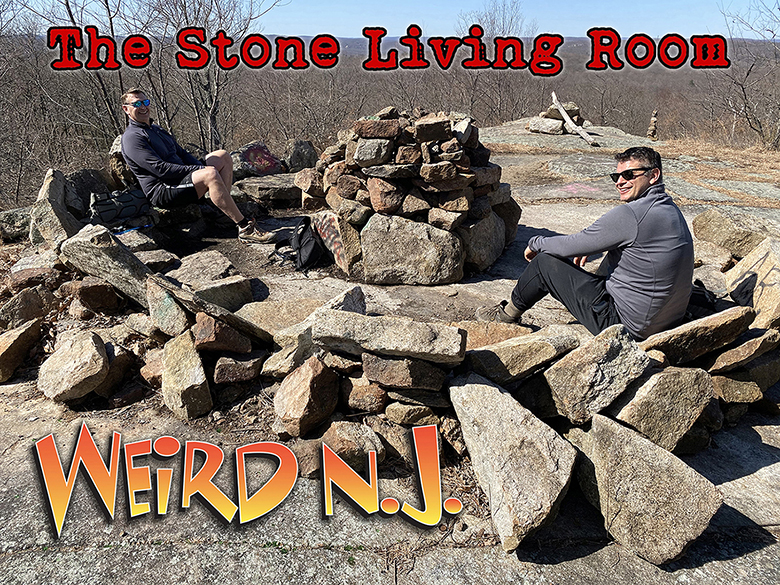 Perched high above the border of West Milford and Bloomingdale in Passaic County, one can relax and enjoy the view from the Stone Living Room, the creation of a mysterious race of stone masons that remain anonymous to this day.  When and why these stone chairs and tables were built, we can not say for sure.  Some of the rocks weigh in excess of 400 pounds and must have been lifted and set in place with incredible determination.  Complete with a fireplace and a few cozy couches, the Stone Living Room can accommodate two dozen or more weary travelers after their one mile climb up the mountain.

When Weird NJ first visited the site back in 1997, we encountered two other hikers and

inquired about the Living Room’s possible decorators. “Holy Shit,” said one of the men when we showed him the site.  “I hike this trail every day, and I never knew this was here. This is amazing!” Amazing it is, and the view isn’t that bad either.

On August 26, 2001 a spiral bound journal was left amongst the rocks of the Living Room in a double bagged plastic pouch complete with pen. Here visitors could sign in and share their thoughts and reflections on the site.  Some even offer a bit of poetry with their fellow travelers.  Though we’d been informed of a previous journal kept at the site, this new one is the only one still present.  Perhaps the former book suffered a fiery fate some cold night on the mountain when kindling was in short supply.

The trail to the Stone Living Room can be found along Glenwild Ave.  Park at the roadside lot by the “Welcome To West Milford” sign.  Cross the street and follow the blue trail straight up the mountain, bearing right. Don’t forget to bring refreshments because you’ll need them.

Since we first published our story of the Stone Living Room we’ve received several letters from our readers voicing different opinions about the possible origins of this unique stone structure; everything from Native American craftsmen, to stoned-out hippy architects.  The following letter speculates about one more possible use for the monolithic mountaintop furniture.

Hello my name is Brian and I can tell you a little more about the Stone Living Room.  My sister built the contemporary house on the left as you go up Glenwild Ave. just before you get to the path.  She owned 10 acres of land bordering that edge of the state park.  My sister is much older than me and as I was growing up I journeyed through these woods and I know everything about them.

The stones on the top of the mountain were moved there by a cult.  At night you could hear them chanting from my sister’s house.  Trust me, it was very spooky.  I had a friend who was in a cult that helped in making this.  This was an area where they could get closer to the sky and be away from authorities.

There was another reason they chose this spot.  It is said these woods are haunted and I know they are.  Mysterious things happen at this site.  If you walk straight back from the path going towards the stones and then on past them, you will reach a ledge.  Along this area there are many circles of stones laid out in a pattern.  You can destroy them and come back in a day and they will be the same again.   –Brian

Chillin’ at the Stone Living Room

I live across the street from the Stone Living Room, and my friends and I have been up there before.  We saw a signing book and when we were there, weird stuff started to happen.  Trees were cracking, and we thought we saw and heard someone yelling “Come here,” and screams of a girl getting beaten or something.  That was just the first time.  We go up there often during the summer, and weird stuff always happens.

One time we were sitting in the chairs and something pushed us and it got really cold.  This was the middle of the summer, and it doesn’t go from 95 degrees to 50 degrees that fast.  –Krystle R. and Lauren K.

I know one of the architects of the Stone Living Room!  I can’t tell you her name since I met her through work; she was a client of an attorney I worked for several years ago and ethical constraints and a confidentiality agreement restrain me from divulging client names. Anyway, when I mentioned to this client in passing one day about my hobby of hiking every weekend and our discovery of the Stone Living Room on one of our many hikes, she laughed at me when I speculated about ancient natives or maybe boy scouts possibly dragging the stones together.

She told me that when she was a hippie teenager (quite frankly she’s still a hippie) growing up in Pompton Lakes in the late ’60s or early ’70s, she and a bunch of her friends would hike up the mountain most weekends to hang out and drink beer/smoke pot, etc., because it was remote and had a great view.  She says they tired of sitting on the rocky, bumpy ground and decided one day to clear out the small stones and drag the really big ones together.  It just happened to be coincidence that the uniquely shaped stones were there to make the “chairs.”

The guys in the group got together and did all the heavy lifting.  She said it took them several weekends to do it all, but it was well worth the effort.  She also told me that she had recently hiked up there again and was amazed that almost nothing had changed.  Even she was surprised at the size of the stones, as she didn’t remember them being so big and heavy.  However, she did say that they were not only drinking beers and smoking pot, but doing some pretty heavy drugs too.  Based on the fact that experimenting with hallucinogens like acid (which has a side effect of amazing displays of strength), I wouldn’t be surprised if some of her friends might have been using acid, and therefore wouldn’t have had much problem moving those big stones.  I didn’t doubt her story since I had found her to be a very reasonable and honest person.  –Amy D.

I grew up on the hill on Glenwild Ave.  The Stone Living Room was built in my youth as a place for kids to drink beer in peace.  My parents purchased the property in 1987 and built their dream home on the mountain.  A handful of friends and I decided to build a “Party Spot.”   What began as just a few pieces of slate rock on top of each other matured into the little “Flintstones area” your readers have dubbed “The Stone Living Room.”  The only thing out of the ordinary about the enclosure was the inscription of a black crow in the rock floor on the west side of the fire pit.  –Ryan A. 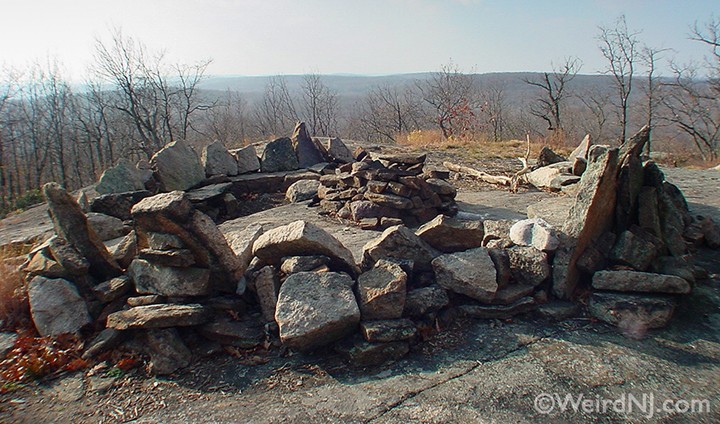