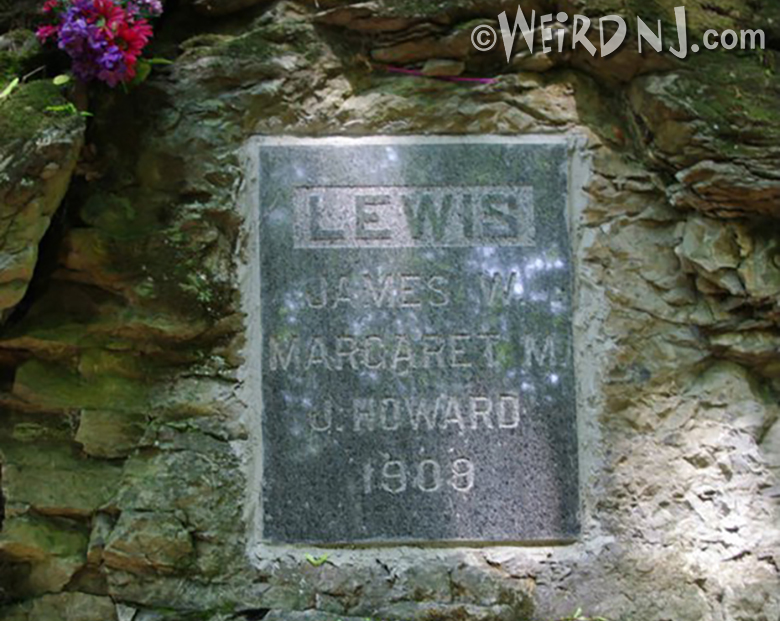 Located alongside Route 621 in the town of Newton is a peaceful little graveyard nestled alongside a wooded hillside, right near the heart of the old town. Though most of the Nineteenth and Twentieth Century stones to be found here are of the usual upright limestone or granite variety, there is one memorial that is very different. The marker, 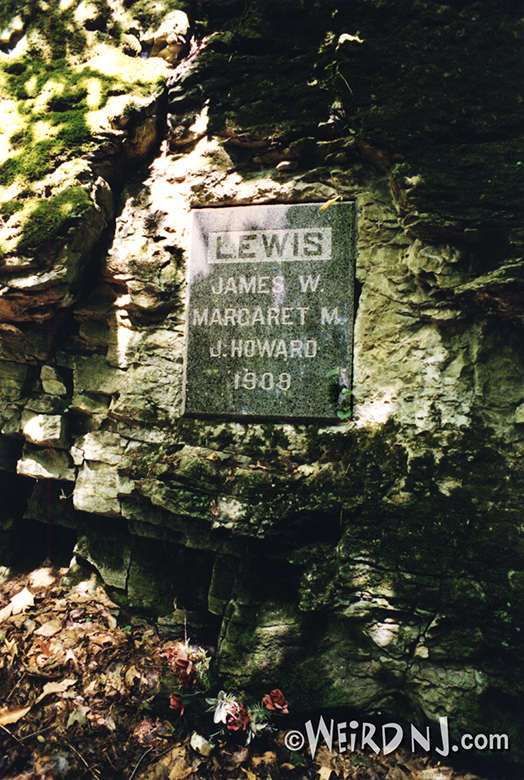 which can be found about fifty yards into the woods beyond the cemetery’s boundary, actually seals off the entrance to a cave. It is mounted upright against the sheer rock face of the hill.

Inscribed on the stone are the names of James, Margaret and J. Howard Lewis and the year 1909. Legend has it that all three were young children when they died. As the story goes, Margaret went into the then unprotected cave and got lost.

Seeking to save their sister the two boys soon followed her into the dark cavern, never to be seen again. Despite all efforts to locate the missing children their bodies were never found. The decision was made to mark their grave at the point where they entered the earth by placing a marble tablet over the cave’s entrance. This would not only mark the final resting place of the three lost children, but also prevent any others from suffering a similar fate to theirs.

After we first published the story of the Cave Grave of Newton we were contacted by the Sussex County Historical Society, which is based in that town. They wanted to know if we could offer them any further information about the site, or let them know our sources for the story. All we could tell them was that this story, like so many of our others, came to us from people local to the area. How much of it is true, and how much is legend we could not say for sure.

Then we asked them if they could share any of their information on the Lewis grave with us. They told as that despite cemetery records that indicate that three children are indeed interred at the site, no other details could be found. Even an extensive search through genealogical records failed to produce any additional information. But this we know: there are three dead children, and their grave is marked by a plaque that seals off the entrance to a cave. And stories are told that the souls of those poor unfortunate lost children are not resting in peace.

I am a resident of Newton now living in North Carolina. My friends and I used to hang out in the Cave Grave cemetery after school, and we were always startled by the way the grave

was placed, and were unsure of its origins.

One night, we were all hanging out in the cemetery as we usually did on Saturday nights, and we kept hearing sticks breaking back towards the rock the Lewis gravestone was mounted on. Being that squirrels were everywhere, we didn’t give it much thought. But as the noise persisted, we approached the grave. To our astonishment, we saw a girl in a dirty dress clutching at her neck as though she was choking. We all screamed and ran, and did not re-approach the grave for many weeks. It is certainly something that we will never forget. Perhaps Margaret is trying to tell us something. I for one don’t plan on finding out.  –Michael A.

An audio story with sound collage by Clay Pigeon. One of a series of Waking Weird episodes which can be heard broadcast live every Monday at 8:39 am (EST) at WFMU FM and WFMU.org. Hear the program archives. Hear more audio stories HERE.

The preceding article is an excerpt from Weird NJ magazine, “Your Travel Guide to New Jersey’s Local Legends and Best Kept Secrets,” which is available on newsstands throughout the state and on the web at www.WeirdNJ.com.  All contents ©Weird NJ and may not be reproduced by any means without permission. Photos by Mark Moran.