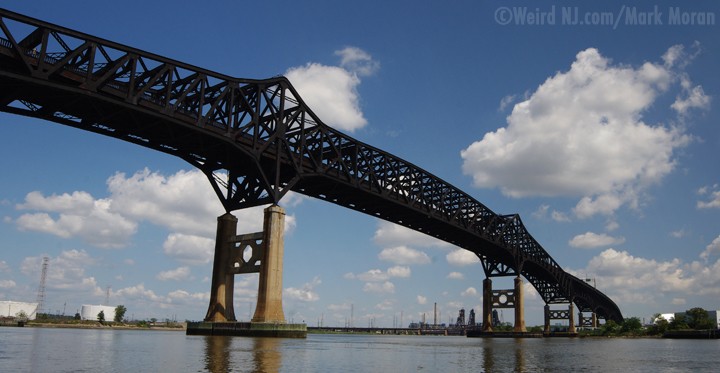 The Pulaski Skyway lumbers across the post-apocalyptic landscape of South Kearny like some kind of skulking prehistoric behemoth. Carrying Route 1-9 on its bumpy spine high into the stratosphere, the span traverses a mosaic of toxic waste dumps, oil refineries, and general urban blight. The western tail of the black steel, erector set-like structure begins in Newark. From there, the skyway stilt walks its way eastward over the industrialized meadow, ending its journey at Jersey City’s depressed highway, near the mouth of the Holland Tunnel.

Until the end of the 1980’s, the highlight of any trip across this three-and-a-half mile, four-lane expanse was witnessing the fires that seemed to burn continuously beneath the Skyway where it straddles the long-dead Hackensack River. The flames, which dotted a reedy field on the Jersey City side of the water, appeared to be small brush fires from the lofty roadway. Upon closer examination though, one could clearly see that the flames were actually coming right up through the ground, as if from hell itself. The fires burned day and night, and cast a noxious pall of thick gray smoke across the nearby Freeman Avenue housing projects and Holy Name Cemetery.

The burning fields, which were known by the name of Brother Muscato’s Dump or the P.J.P. Sanitary Landfill, began accepting trash in 1969. After that, 200 truckloads of waste, most of it in barrels, was deposited on the 87-acre site every day. Hazardous chemicals such as methylene, naphthalene, toluene, phenanthrene, ethylbenzene, and only God knows how may other “enes” were all poured into the dump’s toxic stew. Then one day around the year 1970, the very earth itself caught fire, and would burn on and off for the next 15 years or so. Trying to extinguish the blaze would prove futile because every time one vent of fire was squelched, another would flare up elsewhere. This subterranean inferno would even go through deceptive periods of apparent dormancy, only to erupt again, sometimes through several feet of snow. After awhile, Jersey City’s fire chief simply refused to send in anymore fire fighters because the risks were just too great. 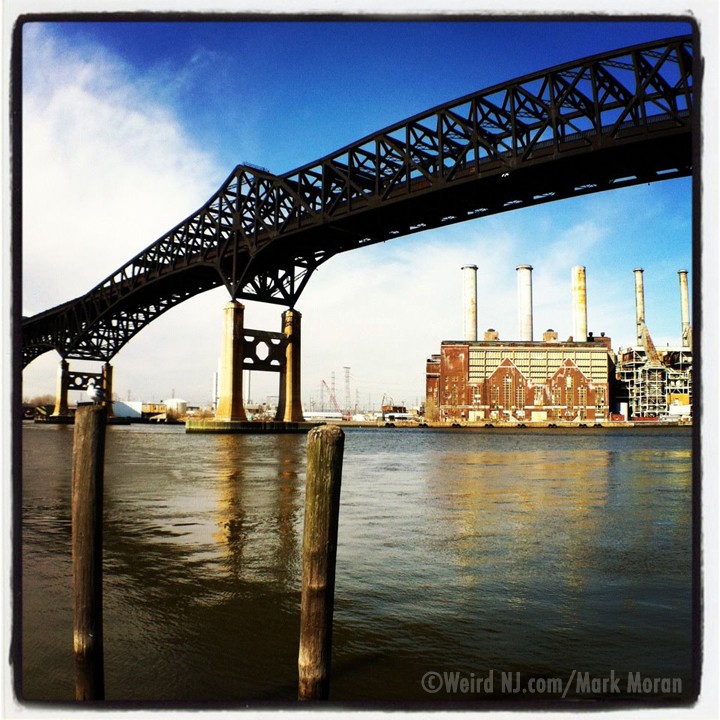 So there the burning fields would smolder, year in and year out, until fears that the fires might eventually melt the steel legs of the mighty Skyway dictated that something had to be done. The Texas firm of Boots & Coots (who would later gain national attention for putting a damper on Kuwait’s oil field fires after the Persian Gulf War) was contracted to snuff out the inferno. Suddenly gone were the hellish yellow-orange fingers, which used to claw their way up through the oily river banks. No more did the choking stench and billowing plumes of smoke waft up to envelope the skyway’s airborne motorists. 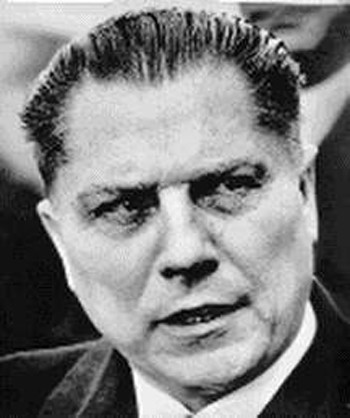 An interesting footnote to this site is that according to Robert Sullivan’s book The Meadowlands (Scribner 1998), this location was suspected of being one possible place where the body of corrupt Teamster boss Jimmy Hoffa might have been dumped. According to Sullivan, the F.B.I. and state police staked out the landfill for a time after Hoffa’s 1975 disappearance. It has long been part of the New Jersey lore that Hoffa was disposed of by The Mob somewhere in the Meadowlands. All that we can say is this; if the burning chemical fields beneath the Pulaski Skyway really are the final resting place of Jimmy Hoffa, there wouldn’t be much left of him to identify even if his body was to be found.

The location of Teamster boss Jimmy Hoffa’s body is still a mystery, long after his 1975 disappearance. But before the mafia contract hit man/serial killer known as Richard “The Ice Man” Kuklinski died in March 2006, he told author Philip Carlo that Hoffa has been reincarnated as a Japanese car. Well, not so much reincarnated as incorporated into scrap metal that was likely made into a car. And the Ice Man knew this, according to Carlo’s book The Ice Man: Confessions of a Mafia Contract Killer, because he did the deed himself after he and four accomplices met with Hoffa outside of a suburban Detroit restaurant. Carlo claims that after killing Hoffa with a combo blackjack/hunting knife to the head and packing him into a handy body bag, Kuklinski drove to a Kearny, New Jersey junkyard, where he engaged in a bit of overkill to dispose of the body, eventually storing it in a car that would become scrap metal.  According to many media accounts, including a story about the book in the April 17 edition of the Bergen Record, the claim has been dismissed as a hoax. –Judy Osborn

To read the thrilling story of two men’s daring journey across the entire expanse of the legendary Pulaski Skyway on foot see Issue #21 of Weird NJ.