Ong’s Hat: Piney Ghost Town or Gateway to Another Dimension? 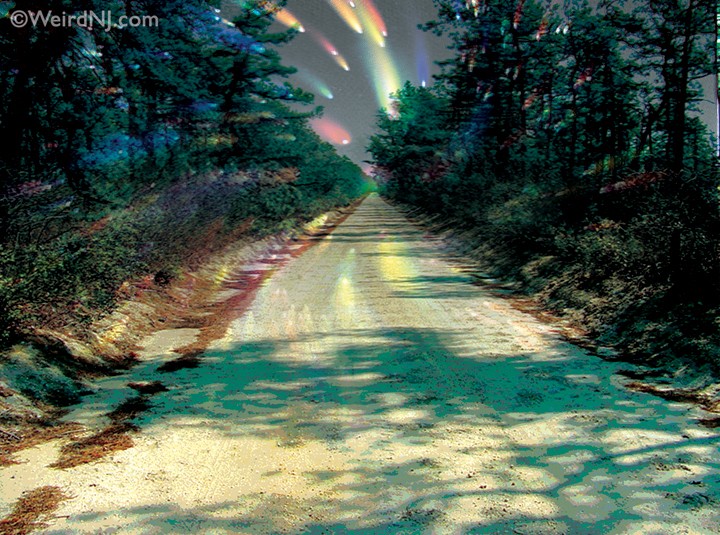 If one takes the Turnpike to exit four and follows Route 70 east, they will come to Route 72 at Four Mile Circle. Taking a hard left leads to a place known as Ong’s Hat, and a trail that some say leads to a mysterious portal to another dimension.

The New Jersey Pine Barrens have a plethora of deserted villages, most of them simply abandoned decades, even centuries ago. One of the most infamous of these is Ong’s Hat in Burlington County. The true reason as to why anyone would name a village Ong’s Hat may be shrouded in mystery forever. The facts are not clear, but the folklore surrounding the town’s name is well known.

Legend has it that at one time a resident of the area was a flashy young gentleman by the name of Ong (while his first name is unknown, Ong is an old time Pine Barrens name––one of the earliest Pines settlers was Jacob Ong). He was a fixture at local dances, where he was famous for being able to woo the ladies with his fancy dance moves and suave attire––most notably his silk hat.

Apparently, Ong was something of what modern youth call a “player,” in that he would flirt and dance with all the ladies he could. One of his love interests caught on to this practice at a dance and attacked Ong, taking his hat and stomping on it. Ong, who was very drunk and very upset that his chapeau had just been ruined, ran outdoors and tossed the hat into the air out of frustration. It caught in the high branches of a pine tree and stayed there for years. It became a landmark by which people could find the small village, and the area was dubbed Ong’s Hat.

As the Pine Barrens themselves became less and less populated with the dying out of local industry, Ong’s Hat was all but forgotten. Today Ong’s Hat is home to no residents. Instead, there are piles of rubble, overgrown building foundations, and other reminders of a bygone age. Ong’s Hat might have been nothing more than a footnote in the local history books were it not for a very weird development that some believe occurred there in the last quarter of the twentieth century––the opening of a gateway to another dimension.

The following, more recent, history of Ong’s Hat and its mysterious inter-dimensional portal can be found in a book entitled “Ong’s Hat: The Beginning.” The author of the book, Joseph Matheny, is coy as to whether he intended the work as fact or fiction. “The split between who believes the book is fiction vs. nonfiction is pretty even,” he has said. Some claim that the book is pure fantasy, and has set up a hoax that many have come to accept as real.

According to Matheny’s history, the Moorish Orthodox Church of America was founded in the 1950’s by a group of white jazz musicians and poets who were formerly members of the Newark founded Moorish Science Temple. The members of this small sect traveled the world, learning different philosophies and spiritual practices from all different masters of the eastern world. One of these travelers was known as Wali Fard.

When Fard returned from his travels abroad in 1978, he spent all of his savings on 200 acres in the New Jersey Pine Barrens. Along with a group of runaway boys from Paramus and two lesbian anarchists, he moved onto the property and formed a newer, even more exclusive sect, the Moorish Science Ashram.

Fard published a series of Xeroxed newsletters proclaiming his beliefs. Those on the fringe who had read his words began flocking to his land. Among these refugees were two scientists looked down upon for their radical views, Frank and Althea Dobbs.

The Dobbs twins were raised in Texas, among a UFO worshipping cult founded by their father. Needless to say, they were used to life on the outskirts of the mainstream. When they arrived in the Pines they set up a laboratory inside a ramshackle trailer. They began making discoveries that shook the small commune to its core.

The siblings had previously been working at Princeton, where they submitted as their PhD theses a series of equations that led to what they called “cognitive chaos.” They were dismissed from the university and found their way to the Pines. In the remote locale they were free to work further on their ideas, whether the academic establishment wanted them to or not. Their theories promoted the idea that people could tap into the unused portion of their brains and do things such as stop their aging and purge diseases from their systems. The Ashram used their research to found the Institute of Chaos Studies.

Progress occurred even quicker than the scientists involved could have predicted themselves. Within three years they had stumbled upon an extraordinary, bizarre device that came to be known as “The Gate.” This was one of a series of devices the scientists referred to as “The Egg.” They hooked people up to computers and charted their brain waves. By experimenting with sex, drugs, and other mind wave manipulators, the scientists learned how to control the chaos they found within the mind.

The fourth version of the Egg was tested on one of the Paramus runaways. When it was activated, he and the device itself disappeared. Moments later it rematerialized. The boy claimed that he had traveled to the dimension next door to ours. This was the opening of The Gate. 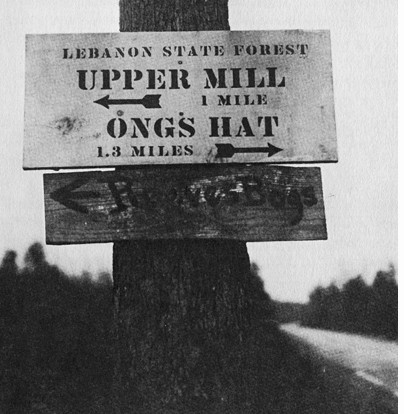 The members of the ICS had to leave their Pine Barrens compound due to a chemical spill from Fort Dix that was leaking nuclear material into the area. Instead of fleeing outward, they fled inter-dimensionally. They used the Gate to transport themselves and all of their possessions into an alternate dimension. In this dimension they still lived in Ong’s Hat, but humankind did not exist.

According to some, the experiments at Ong’s Hat led to a violent and bloody confrontation. They claim that the government got wind of the experiments being conducted at Ong’s Hat and stormed the compound there, killing seven members of the group. Some say it was Delta Force who did the killing, while others blame operatives of the Russian or Danish militaries.

Skeptics of this far-fetched tale believe that Joseph Matheny’s book “Ong’s Hat: The Beginning” is nothing more than a work of pure fiction, bolstered by an elaborate Internet hoax. Others claim that Matheny has had to hint at the book being a hoax to preserve his efforts to tell the truth and to protect his own safety.

Matheny first became involved in the Ong’s Hat saga when he posted a book catalog he had found, known as the “Incunabula Catalog,” on BBS and FTP systems around the Internet at the turn of the 90’s. Then he produced one of the essays reviewed in this catalog. From there he claimed to have interviewed one of the physicists mentioned in these papers, as well as the original author of the book catalog he had posted. These four documents make up what are known as the “Incunabula Papers.” It is somewhat unclear as to whether there ever was any documentation of these alleged events other than the ones that Matheny “found” and posted himself.

So was Ong’s Hat ever the home of a mysterious cult of science nerds, or is this inter-dimensional Gate merely one of the earliest known Internet hoaxes? Whatever the case may be, the story of Ong’s Hat is truly a bizarre one, and believed to be more fact than fiction by more than just a few sci-fi fanatics.

This article is an excerpt from Weird NJ magazine, “Your Travel Guide to New Jersey’s Local Legends and Best Kept Secrets,” which is available on newsstands throughout the state and on the web at www.WeirdNJ.com.