Many legends are associated with Shades of Death Road, which winds alongside Jenny Jump State Forest up to Allamuchy in Warren County. One of the more famous street names in New Jersey roadside culture, this road runs along an old haunted lake bed which occasionally has pillars of mist rising from the top of the water.

“I don’t know what causes it, but I’ve seen it when I was fishing,” states Pete Valliere. “I think it was a legend about the early settlers killing the Indians and throwing them into the lake.” This phenomena is also called The Great Meadows Fog. Some people claim to see the dead walking along the road in the mist. Shades of Death Road also runs by the Dark Moon Bar, a must-stop on any Weird N.J. trip. The road was also the site of many deaths once thought to be a curse on the area. But Chrissy Waters, an employee at Chruszâs General Store in Johnsonburg, said that her mother had told her it was some kind of plague caused by the water that was responsible.

“Someone is always trying to steal the sign,” says Waters. “That’s why they greased up the pole.”

The Long and Winding Saga of Shades of Death Road
Out of all the grim monikers encountered out on the roads less traveled throughout New Jersey, perhaps none is more foreboding than the infamous Shades of Death Road. Like many places steeped in local lore, reality and legend have become intertwined over the years, obscuring exactly what can be considered fact regarding this byway. What is known is that for centuries, this road has been a dark, mysterious thoroughfare for travelers to cut across one of the more isolated parts of our state. What isn’t known is exactly how this street earned its curious name.

According to one legend, murder is at the root of the Shades of Death name. One tale relating to murder says that the original inhabitants of the area surrounding Shades of Death were an unruly band of squatters. Often, men from this vile gang would get into fights over women, and the squabbles would result in the death of one of the participants. As the reputation of these murderous bandits grew, the area they inhabited was named “Shades of Death.” When the civilized world encroached on and disbanded the bandits, the last remnant of their control over the meadows was restricted to one road that retained the name they made famous.

Another murder theory says that the road was originally known as “The Shades,” because of the low hanging trees which formed a canopy over the length of the street. Legend says that over time, many murders occurred there, and many stayed unsolved, causing local residents to add the sinister “of Death” twist to the formerly pleasant “Shades” name. 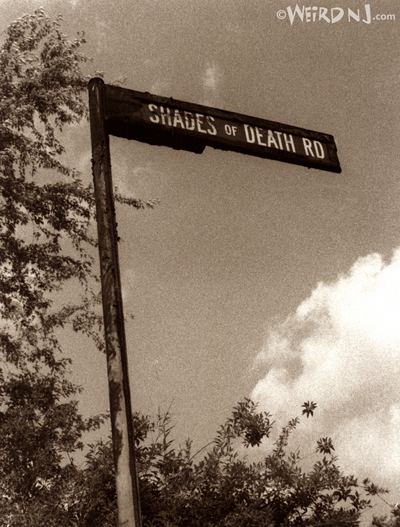 There are still other explanations of how Shades acquired its name which have less to do with murder, and more to do with death by natural causes. Shades of Death traverses an area long known as the “Great Meadows,” which upon its original settlement was a vast area of marshy swampland. Around 1850, an outbreak of malaria carrying insects was discovered near a cliff face along Shades. As the citizens around Shades came to expect the yearly outbreaks of this terrible disease, they began to anticipate the annual spate of deaths of friends and family members which came along with it. Like any community, their landmarks, in particular this one road, came to reflect the morose attitude they had regarding these epidemics.

Traveling along Shades of Death today, it is still a mysterious, foreboding place. Whatever

the real origins of the name are, something about this tract of land caused its earliest settlers to imbue upon it a name which speaks of death. No matter which legends or facts you choose to believe, it would seem that the road’s name was offered up as a warning from beyond the grave to those who might travel this dark path unaware of its potential hazards. Though we may never know for sure how the road actually got its name, it might be a good idea to heed those warnings and say a little prayer when traveling on Shades of Death Road.