Tuckerton Tower and the Mysterious Monoliths of Mystic Isles 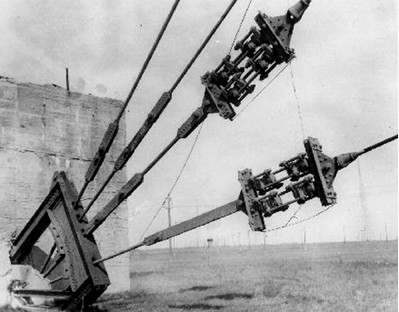 The square blocks in the ground found on Mystic Island were once the concrete anchors of the “Tuckerton Tower.” These anchors are not only 20 feet high, they also extend 20 feet underground. The Tuckerton Tower was 820 feet high and built in 1912 by the German government to communicate with an identical tower in Germany, as well as ships and submarines in the Atlantic Ocean. In its time it was one of the two tallest structures ever built in the world (second only to the Eiffel Tower). It was one of the first and most powerful transatlantic radio stations ever constructed. 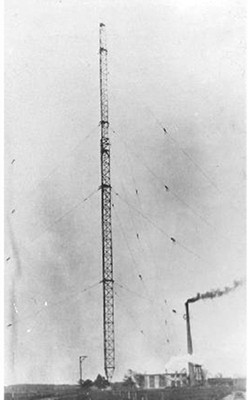 Mystic Island (then Hickory Island) was chosen because the ground was level, and the island was in a desolate location. All the parts were built and tested in Germany, then shipped to the United States. Incredibly, the U.S. Government was unaware of the massive communication project until it was almost completed. Early in World War I, while the U.S. was still neutral, the government kept a close watch on the tower to ensure it was not broadcasting any military messages in violation of the Neutrality Act. This censorship was ineffective, however, as seemingly harmless messages could be delivered in code. It is believed by many, though far from proven, that the station sent out the order, “Get Lucy,” to a German submarine as code for the order to sink the liner “Lusitania.”

When America entered the war in 1917, the United States military immediately took over the tower and used it until the end of the war. Later, RCA operated it until World War II, when the military took it over again. On December 28, 1955, the tower was torn down and cut up for scrap.  –Michael J. Launay

Those Mysterious Monoliths of Mystic Isles

When I was a boy in the early 1960s my parents had a vacation home in Mystic Isles, New Jersey, just beyond Tuckerton, along the Great Bay. There were hundreds of one-story homes, all the same size and shape in a variety of pastel colors, that were lined along a vast grid of man-made lagoons that led to the bay. Everybody owned a boat.

The homes were built on sandlot streets and directly across from our house, at the edge of a corner lagoon, rose a giant concrete monolith, perhaps thirty foot square. It was one of seven, if I recall correctly, that dotted the landscape of the housing development. Apparently these cement squares were the base of giant conning towers that climbed up over Great Bay during World War II which were used to watch the coastline and look out for Nazi subs.

The wooden towers disappeared long before 1963 but the massive concrete squares bases remained. They looked like they could have withstood an atomic blast. As a ten year old boy I spent quite a bit of time trying to figure out a way to climb to the top of the monolith across the street. Five blocks away, another one had a staircase and a fence around the top so vacationers and tourists could satisfy their curiosity and get a bird’s eye view. But that, of course, could not have compared with the rush of getting to the top of one of the bare stairless stones. That would have been sweet but it was absolutely impossible for a ten year old. They were just too big.

I haven’t been to Mystic Islands for over thirty-five years but several years ago a friend went down and took a photo of the stone across the street from my boyhood summer home. The Standing Stones of Mystic Isles certainly is one of weirdest memories I have growing up in the Garden State. –Rick Cusick

This Internet story is only an excerpt of the information we have published on this subject. For the full story we suggest you refer to past issues of Weird NJ Magazine.  To keep up to date on this story and all the other weird goings on in the state subscribe to Weird NJ and we’ll deliver it to your door. If your local book seller, newsstand or convenience store doesn’t carry Weird NJ, just tell them to call us toll free at 1-866-WEIRDNJ and we’ll be happy to stock your favorite store for you.