A Bridge Abridged in Hoboken

Today, one backyard along 12th Street in Hoboken is five feet wider than it was a few years ago. Because that’s when Hoboken’s “Phantom Bridge” cornerstone mysteriously disappeared.

Once located in the backyard of 1200 Garden Street, it was a massive block of carved stone. Cut into its side was the inscription: “The North River Bridge Co. Ground Broken June 8th, 1895. First Foundation Masonry Laid June 18th 1895.” It was to be the 57th St. Bridge, linking Hoboken and Manhattan, and one of the grandest projects in the history of American engineering. 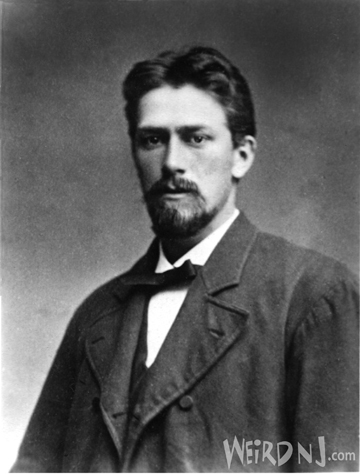 The brainchild of Gustav Lindenthal, an Austrian-born bridge builder, the 57th St. Bridge was to be nearly twice the size of the yet to be constructed George Washington Bridge. It would be 6,000 feet long, 200 feet above the Hudson River, and 200 feet wide. It was to carry 12 railroads, 24 lanes of traffic and two promenades. Lindenthal envisioned a single span, anchored on both side by cables, soaring across the waterway. It would have been quite a sight, and revolutionary compared to the tried and true method of using heavy cantilevers and arches.

Although the cornerstone was laid, a series of bad breaks plagued the North River Bridge Co. First, the 1898 Depression halted construction, then later the coming of World War One delayed the project again. After the war, Lindenthal again revised his plan to suit the modern needs of the automobile, adding a second level to accommodate the anticipated traffic jams of the 1920’s.

The formation of the Port Authority in 1921 claimed the span would hinder navigation, and the railroads decided to tunnel beneath the river instead, leaving the Hudson County bridge builders to redirect their plans once again. Opposition also came from local businessmen and various Chambers of Commerce. In 1933, the secretary of transportation rejected the revised plans because they would have competed with the Lincoln Tunnel, which opened four years later. It seems the project was ill-fated ever since those first few words were chiseled into the now vanished cornerstone. 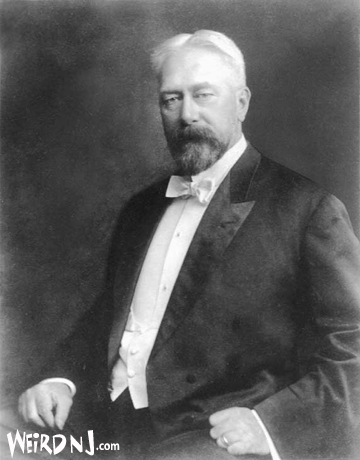 Until the day he died, Lindenthal fought to build the bridge. Before an operation at the age of 85, he dictated a statement to his daughter that read: “I have informed my physicians of my desire to see the bridge a reality and, as I can live only if they operate, I have unhesitatingly made my choice, knowing full well the odds against me.”

His friends claimed fighting to build the bridge kept him alive. At his deathbed, before he fell into a coma, he still discussed the span that would never be built. Lindenthal died a wealthy man in 1935 on his 250-acre farm in Metuchen, NJ. His victories were the bridges in New York that he designed—such as the Hell Gate and Queensboro bridges. His defeat was the abandoned 57th St. Bridge project.

Walking Hoboken’s narrow 12th street today, one could only imagine what the town would have looked like if the bridge had become a reality. The neighborhood would have been destroyed, and more than likely, Hoboken would have become covered with exit and entrance ramps.

When we asked a neighbor what happened to the cornerstone, she replied, “They were just tired of it. They needed the space for the kids to play in the backyard.” We were told that the stone had been removed, and then demolished. And so it would seem that this curious reminder of one man’s grand vision, like so many of our state’s great landmarks, had passed into forgotten history like so much water under the bridge. 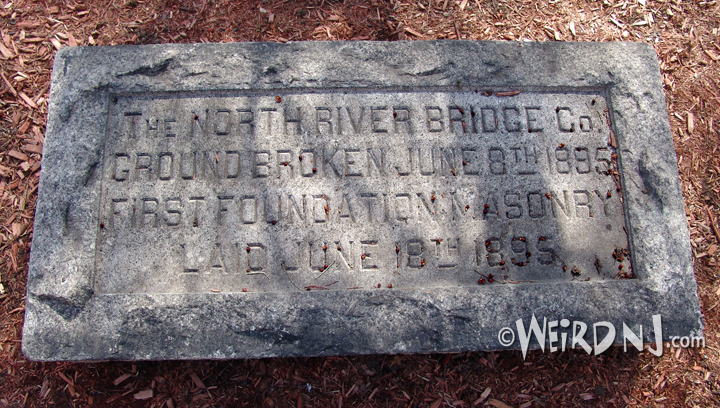 But then a curious thing happened a few years after the stone’s disappearance. Weird NJ reader Joe Wasielewski actually rediscovered the cornerstone by chance on a crumbling

pier along muddy banks of the Hudson River in Hoboken. Joe remembers, “A couple years back I was discussing this mysterious inscribed stone I had found along the Hoboken Waterfront with a friend––he said he may have had some information on it––sure enough, we went to Weird NJ, put two and two together, and realized it was the cornerstone to the phantom bridge!

“About a year ago, while working along the waterfront, I realized the stone was in imminent danger of falling into the Hudson River, as the pier it was located on was rapidly collapsing. Using a long steel bar (which was subsequently bent to heck), three pipes as rollers and a whole lot of brute force, I was able to pry the stone out of the hole it was falling into, up onto the rollers, and move it to a resting place above a relieving wall.” 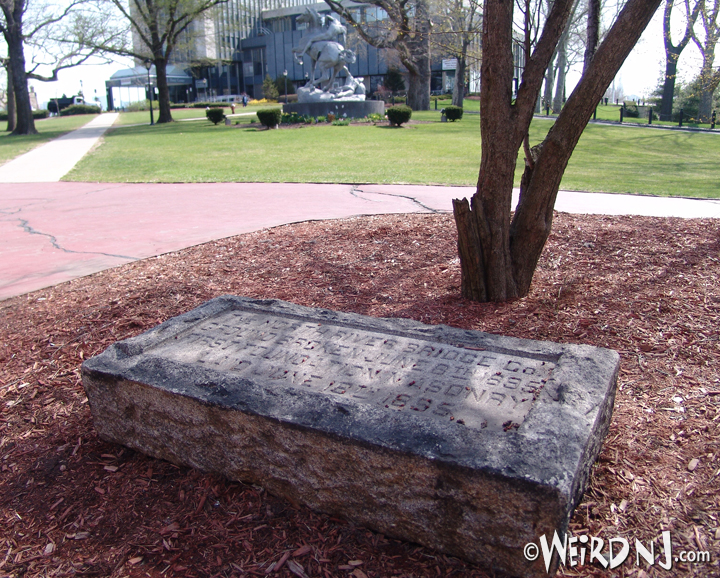 The West New York Bridge cornerstone today, on the grounds of Steven’s Institute of Technology in Hoboken.

Eventually the stone would find a most fitting final resting place on the grounds of Hoboken’s Steven’s Institute of Technology, where it lays high above the river with a view of New York City, looking very much like a tombstone for bridge that only ever existed in the dreams of one visionary civil engineer. 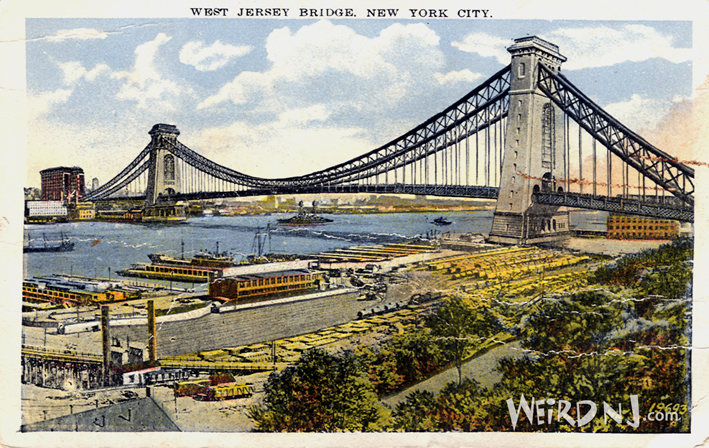