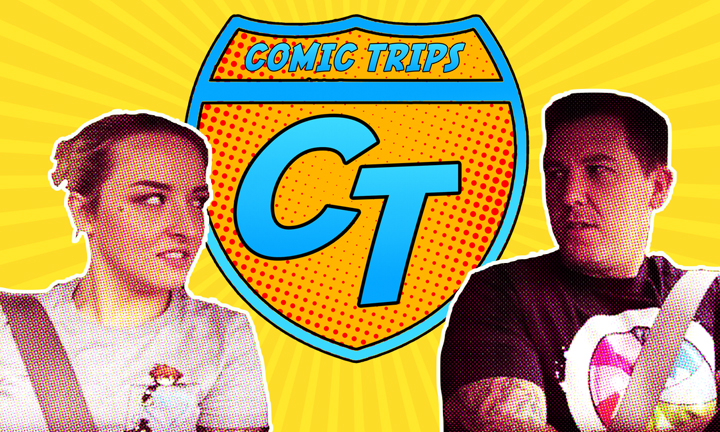 10 Questions for Paul Brown and , the founders of Comic Trips

I am flying high over Tupelo, Mississippi with America’s hottest band… and we are all about to die! Nope, this time I’m attempting to keep up with the adventures of Paul Brown and Kat Habrukowich by binge watching the latest season of their web series, Comic Trips. The series has accurately been labeled as the “American Pickers for 80’s babies” and has already logged in five seasons plus several special episodes (Drunk Toy Review, What’s in the Box? Contest Giveways, Twinkie Taste Test, etc). Paul and Kat are powerhouses of positivity and pop culture knowledge. They are out and about, cruising down the nostalgia highway on a mission to find key issues, vintage toys and unique collectibles.

Each episode finds the road warriors having a blast as they pick through long boxes, dig through piles of packages, review exclusive items and talk all things geeky-goodness with new friends they make along the way. Each episode also provides several moments for any viewer who grew up in the 80’s or 90’s to yell out “I had that!” or “I wanted that!” And hey, speaking of talking all things geeky-goodness, I was able to track down Paul Brown in between stops at comic shops to have him answer ten questions for DIYNJ…

Everyone loves an origin story… Soooo….
1. This one may be fairly obvious, since you two go on trips to find comics. But is there a story behind the name Comic Trips? Who came up with the name and what were some other names you kicked around?

Comic Trips originated from what occurred on our first few dates. We would visit comic book shops, play video games, visit comic & pop culture conventions, and it snowballed from there. “Bargain Bin Bandits” and “Nostalgia Hunters” were among other iterations that we tossed around before Kat one day blurted out “Comic Trips”, and boom. There it was.

2. How/Why/When did you get started?

The idea of Comic Trips itself began as the idea for a blog. Just a normal old Tumblr or WordPress blog with an occasional picture of what we found. We were going to make it a website, but after a slew of super fun car rides and memorable conversations, we figured “let’s try turning on a camera and see what happens!” Comic Trips got started because we wanted to highlight local comic book and toy stores around New Jersey. Since we are both natives to the state, it only seemed fitting to help put the spotlight on independent businesses. “Comic Trips” the entity was started in January of 2015, however our first webisode was uploaded to YouTube on March 9, 2015.

3. What does your process look like (selecting stores to visit, items to purchase, editing process, etc)?

The Comic Trips process isn’t exactly a set process whatsoever, actually. We rely heavily on our previous knowledge of existing businesses and shows/events. In addition we take note heavily on viewer and subscriber recommendations/suggestions. We purchase just about anything from our childhood that sparks a positive memory. We mainly will pick up items that are still sealed in-box or “on-card”(think of the cardboard card on the back of action figures, the crisper the better!). Items include Mighty Morphin Power Rangers, Terminator2, X-Men, old wrestling toys and newer toys/comics on occasion. The editing process can last up to two weeks per webisode and is done mainly though Final Cut Pro X. Unboxing videos and reviews are much less daunting. We started out in iMovie with our iPhones and then graduated to our current camera Canon 70D and Final Cut Pro X. We are throwing around the idea of Adobe Premier or Avid. 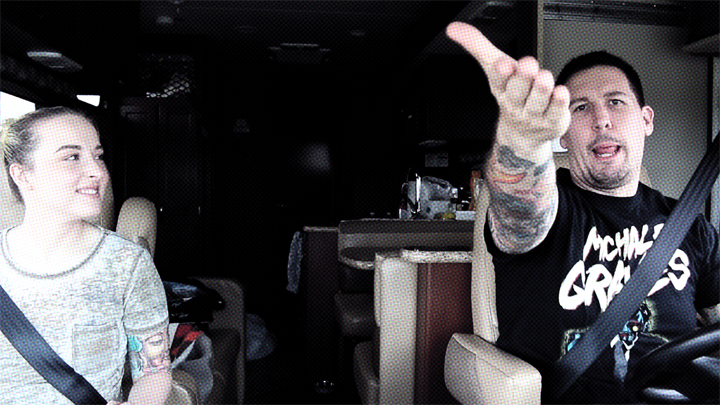 4. How big a role does the area/community of NJ that you operate out of play into your brand?
The role of our community and area is massively influential to our brand. Without our community, essentially we have nothing. They support us by giving us video feedback, conversing with us daily and recommending shops and events. We look out for one another to ensure that everyone is treated fairly and has the opportunity all the same.

Speaking of community, in marketing and networking these days, online communities usually have a big role in the success and expansion of DIY businesses. And as with any relationship, there seems to be periods of love and hate as opinions and reviews flow freely on open forums and message boards. So, with that being said…

5. Does being part of an online community make it difficult to “please the people” and still “stay true” to your vision?

Being part of an online community has been really rewarding to us. The community that we’ve built is a very positive and supportive one. We stay true to ourselves and we never compromise our brand. We’ve always promoted positivity and kindness and our followers and subscribers enjoy that about our channel. Everyone can converse and comment without the fear of being shot down or ridiculed. We live our lives being excellent to one another and we hope and see that it rubs off on our viewers.

6. What phase of the love/hate relationship would describe your current state of mind when dealing with the online community? It’s just us comic book nerds here, so you can be honest!

The online community can be an interesting one. There are times when it’s love/hate but a majority of the time, it’s love. Everyone supports and encourages one another to collect or go follow that nostalgic bone in their body. The hate portion isn’t so much as hate as it is…sometimes frustration with others judging…but we’ve found that being humble and aware of everyone’s feelings is paramount to success.

7a. Your brand has taking you to many places, not only in the Garden State but also around the United States? What is one of your favorite adventures or experiences?
We recently took a road trip around the U.S. and one of our favorite spots had to be Heroes Headquarters in Denver, Colorado. Loads of comics that were all bagged and boarded and tons of 90’s X-Men toys, Kenner/Hasbro toys and statues! It’s the same place where one of the owners showed us his personal comic collection- over 1 million dollars worth of comics. It was beautiful and overwhelming.

7b. Any Least favorite?
We have visited stores and shops before that weren’t up to par with the quality of video that we wanted to produce… So instead of showing off a store that wasn’t a thumbs up, we just don’t air the footage.

Let’s talk about what’s on the horizon for Comic Trips…
8. What should we know about what you got going on?
We are in the works of planning out season 6 and working on events for the future. We are in the midst of hopefully launching a Patreon where subscribers can pledge dollar amounts to help support and fund our channel for videos and special patron-only perks, i.e. secret videos, giveaways, Google hangouts, etc.

9. What can we look forward to in the future?
Everyone can look forward to season 6 and 7 & 8 and so on! We have no plans of stopping and we’re only upgrading from here. Maybe one day our show will turn into a TV show or a streaming service special…the possibilities are endless and we want to do right by the people who have stood by us over the first year and a half of fun! 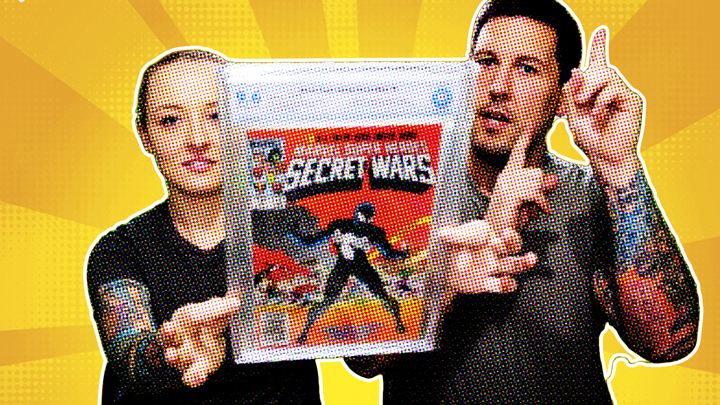 The only appearance we have lined up is South Jersey Geek Fest on October 29th as of right now, but following our social media will be the best way to be notified of that changing!

Thanks for the info and your time, Mr. Brown! Stay Up, Stay Tuned and Tune In Next Time as WEIRD NJ “Breaks Bad” with DIY superstars that are tripping throughout the Garden State.