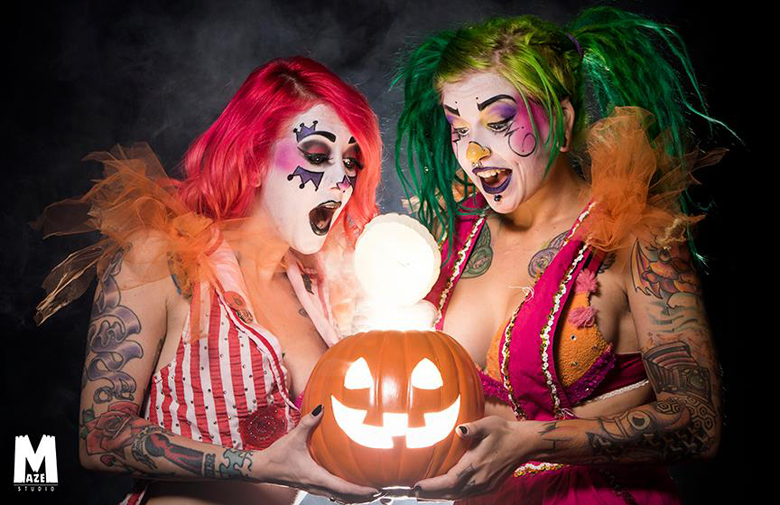 What Do Real-Life Sexy Clowns Think of the Creepy Clown Craze?

by Matt Chrystal for Weird NJ

In October, NJ.com did a feature that answered the question, “What do real-life scary clowns think of the creepy clown craze?” But I knew there was another question out there.
A question that needed to be answered! I’m talking about the real question! The question that was burning in everyone’s mind!  The question that has been keeping people up at night! The question that only the bravest of journalists would be willing to ask! That question…

What Do Real-Life Sexy Clowns Think of the Creepy Clown Craze? 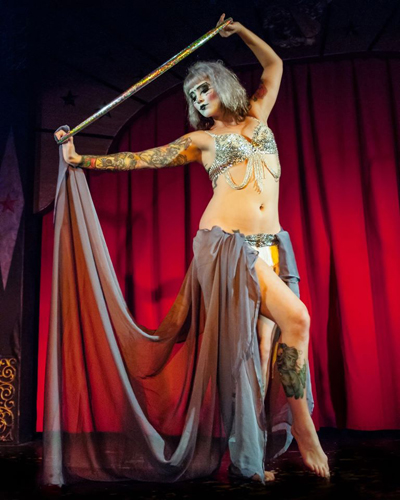 I knew that the readers of Weird NJ could not rest until they knew the truth. I knew that the year could not end without an answer. I decided to put my safety aside and throw caution to the wind. I went out in search of an answer. I went out in search of…. Thunder Snow Cone. Thunder Snow Cone is a Philadelphia-based troupe of the silliest women in show business who put on performances that combine burlesque, sideshow and comedy. They are in the business of making things weird and causing “fear-boners” from coast to coast. Armed with only my list of questions, I was able to catch up with the mistress of whimsy, Scarlett Storm and Smurfasaur, the clumsiest aerialist, just before they took flight for a tour of Alaska. I then tracked down Asha Rabbit, an expert level hula-hooper, who was recovering at home after taking a tumble off of her bicycle and going a few rounds with a Philly-sized pot-hole. I needed answers! Weird NJ needed answers! America needed answers! So without further ado, here is what real-life sexy clowns think about the creepy clown craze…

Weird MC: So, let’s get your expert clown opinions… what was going on with these creepy clowns sightings? Were they Thunder Snow Cone hopefuls? Were they Killer Clowns from Outer Space? Disturbed Attention Seekers? Was it all a media hoax? Or could it have been a marketing ploy for the upcoming remake of Stephen King’s IT?

Scarlett & Smurfasaur: IT WAS OCTOBER! Since like ever, people have been playing spooky pranks around Halloween. But we bet the original creepy clown sighting was for the new IT movie. Then a bunch of kids with nothing to do were just being copy cats!

Asha Rabbit: I think they were Trump supporters trying to get their Purge on.

My editor, Mark Moran, pointed out to me that a rash of media reports about “creepy clowns lurking around small towns” is something that happens annually from late September throughout October. Why do you think it seemed to be such a bigger deal this year? Are clowns just the new “It” thing this year (pun intended)?

S&S: It was an election year and the media loves distracting us from important things.

Has this latest outbreak of reports of “creepy clowns” affected your business or brought you any additional attention? If so, has it been in a positive or negative way?

S&S: It’s just been a joke. Like OOOOOHHH! So this is what you girls do on tour?!

AR: Definitely an influx of business. In fact, the creepy clowns have been hiring us to distract you guys the whole time!

While some of your acts may be categorized as NSFW, I don’t think you ladies can actually be described as creepy… but does it worry you that due to this media-alleged-backlash-against-clowns, that you may be coming or going from a gig and suddenly find you have become the target(s) of a vigilante, angry mob or overzealous constable?

Smurfasaur: There is really no difference here between being a clown and being a woman.

Asha: We are definitely creepy! And we have a weapon to deal with angry mobs but you’ll have to have Scarlet tell you about that.

Speaking of gigs… you advertise that you are in the business of making things weird and causing fear-boners from coast to coast. For those who haven’t experienced it yet… Just how weird can it get at a Thunder Snow Cone show? 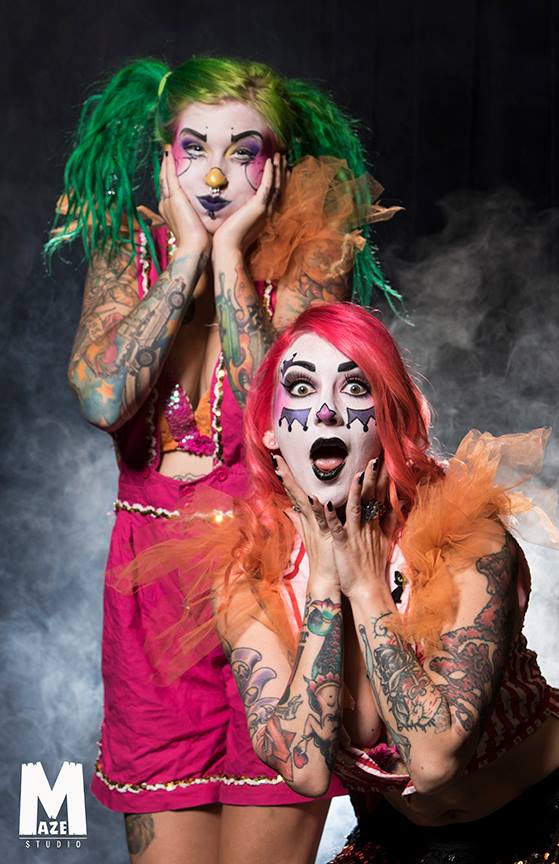 S&S: Giant-Rubber-Cock-Wielding-Clown-Babes! Larger-Than-Life-Sized-Baby-Babes! Ballsack and Vagina Stapling (because we like to be inclusive)! Feral Felines with Poopy Behinds! Dangerous Sharp Objects! Risk of Definite Impalement! And Dad Jokes!

AR: As weird as it needs to be!

One would think it would be obvious to everyone that your act is all about fun and the promoting of fear-boners, butt-hoops and martian-mammories are all done with tongue planted firmly in cheek… but has this type of marketing garnered you any backlash in this period of political correctness, where everyone seems to get offended by everything? Or is it one of those things where hey, getting weird is your business and business is good!?

S&S: Our aim is never to make fun of anyone or offend anyone. It’s really not that hard to not be a dick.

AR: The business of getting weird will always be pretty good.

While the motives behind these “creepy clowns” still remain unclear, the ladies of Thunder Snow Cone are like the O.G.’s (original gangstas) of sexy clowns. What inspired you to become the silliest women in sideshow? 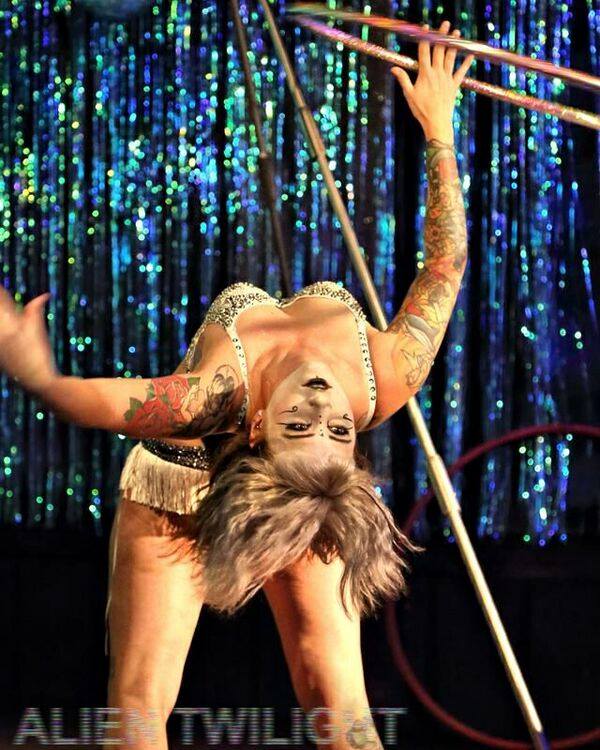 S&S: There are so many sexy clown babes out there! We are definitely not the O.G.’s of clown ladies. Becoming clown babes just kind of happened to us over time and we got weirder and weirder.

What keeps you motivated to continue to perform as a Thunder Snow Cone?

AR:  Thunder Snow Cone is all about the shrug life. We love what we do and we will keep doing it as long as people are willing to show up! We are clowns for the people!

Before there was a #ClownLivesMatter movement, members of ThunderSnowCone were racking up the “likes” on all social media platforms with #TurnClownForWhat…

Can you tell us about what it means to TurnClownForWhat?

S&S: It’s just a joke based on the song, Turn Down for What (by DJ Snake & Lil Jon), which has the most amazing music video in history.

AR: Yup, TurnClownForWhat is much like the song, Turn Down for What. Loud. Nonsensical. Energetic. Eventually you just give in and shake your ass.

Do you have anything you would like to say in regards to the “ClownLivesMatter” movement?

S&S&AR: We do not support that movement… at all. A really important movement, Black Lives Matter is being mocked. When you get down to it every clown chooses to be a clown and can take that makeup off. I’m sure a person of color could go on for days and days why this whole ClownLivesMatter thing pisses them off, so maybe everyone needs to shut up and listen to them.

Do you have a message for these “creepy clowns” if they are still out there or if they happen to be lurking on WeirdNJ.com?

S&S: Seriously, stop. Someone is going to get hurt.

ThunderSnowCone spent Halloween in Alaska and then retuned to do some hometown shows before touring the South for most of December… Do you have any upcoming shows you want to mention where one might go to get a fear-boner to start the New Year?

S&S: Come celebrate Smurfasaur’s 27th birthday on Jan. 12th at Franky Bradley’s in Philly. The show will also feature Dr. Claw and Titano Oddfellow and will be hosted by none other than presidential hopeful, Vermin Supreme! You heard us. This is not a drill.

AR: I’m always floating the Philadelphia area while the girls are off touring. We spread the clowns around. Follow us on social media to see where we will be!

Where can we go if we want to find out more about the members of Thunder Snow Cone?

Thanks ladies, I appreciate your input and your time. I’m looking forward to the next ThunderSnowCone show and to that fear-boner… I think. 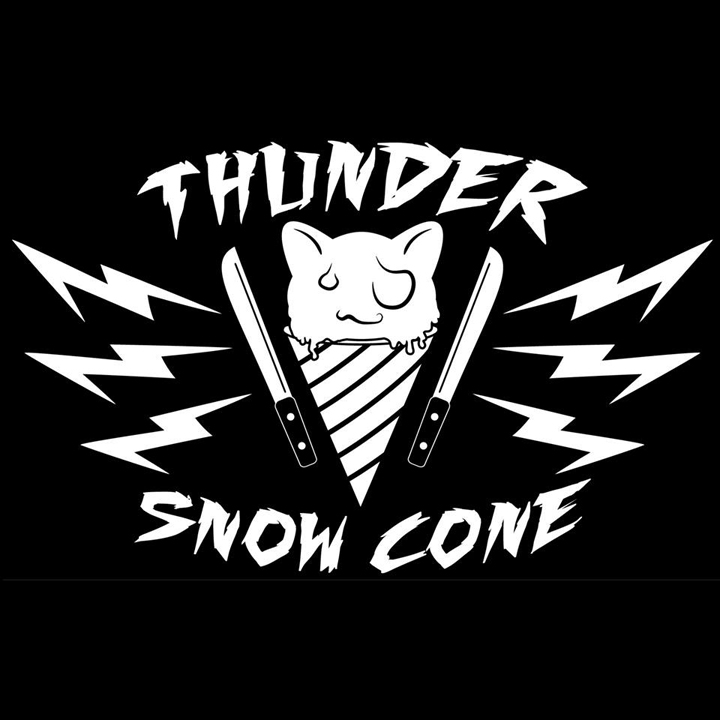