The Adventure Village That Time Forgot 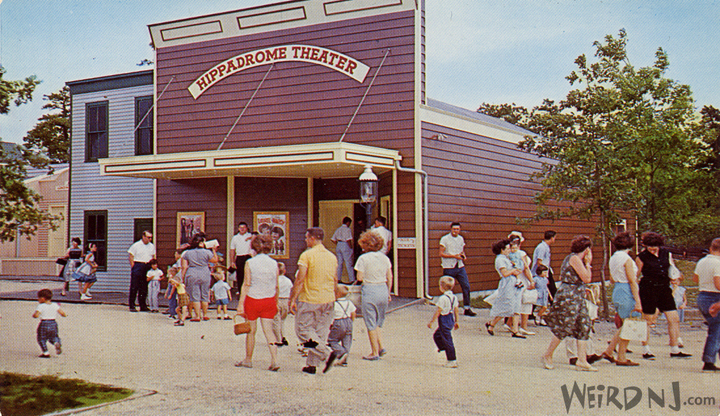 Our state has a long history of unique youth oriented attractions. Most of the really well known ones though, like Palisades Amusement Park or Jungle Habitat, closed down so

long ago only older readers would be able remember them in their heydays. Sadly, even many of our state’s smaller, family run parks have gone out of business in recent decades, victims of the changing times and peoples’ tastes for newer and more exciting forms of entertainment and recreation.

Nothing stays forever young, and there may be no more poignant reminder that youth is fleeting than seeing an abandoned and forlorn kiddie park deteriorating in the woods somewhere––all the joy that it once provided now just a ghostly memory. One such memory which has now vanished from the Weird NJ landscaped is that of an odd little amusement park called Adventure Village, which was once located along the Black Horse Pike in the Egg Harbor Township. 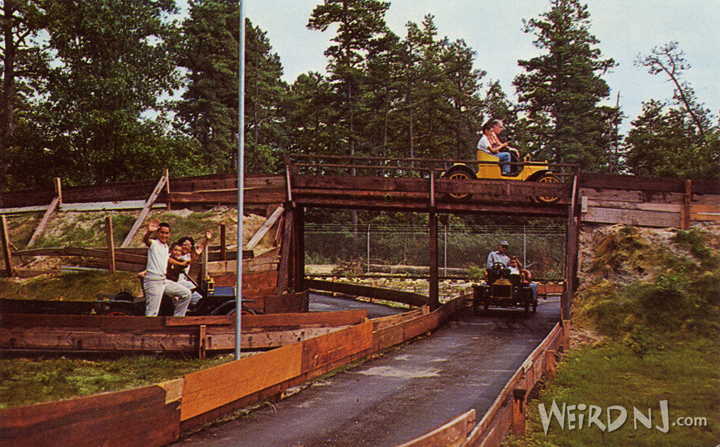 Built by a man named Fred Warner in 1959, the park was operated by Fred and his family. Music played throughout the park as pig races and other such events were held. There was

a train ride to a “ghost town” where an armed robber would take over the train. Back in the main town however, the bandit would be captured by the sheriff and thrown in jail. Adventure Village seemed to have a bit of a identity crisis when it came to what period they were trying to recreate. While some of the “attractions” were of a distinctly “Wild West” theme, other activities were 20th century in nature, like the Keystone Cops that would hand out little tin police badges to the kiddies. There was also an actual fire engine, circa 1945, which gave rides and allowed kids to ring the bell and run the siren. 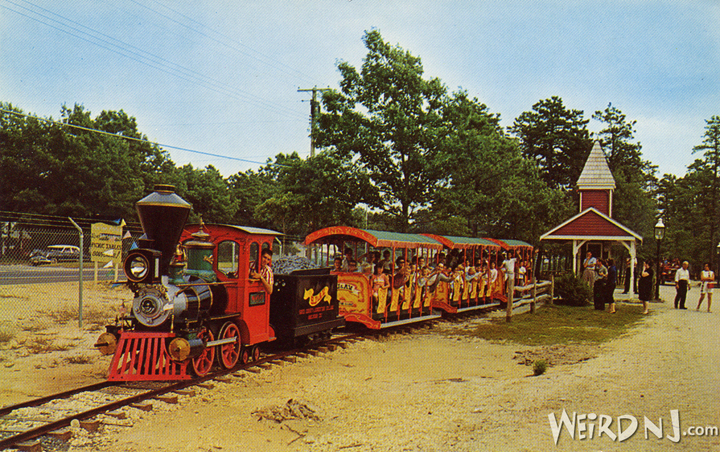 Come with us now as we take a ride down memory lane with some of our Weird NJ readers for a nostalgic look back, through the looking glass, at one of the weird places that once was. Next stop, at Adventure Village!

In Egg Harbor, there used to be an amusement park called Adventure Village. It was down the street (Black Horse Pike) from Storybook Land. Adventure Village was a simulated Wild West town, complete with stagecoach rides and a miniature train ride featuring actors pretending to shoot each other.

We went there many times during the Seventies. (I think it closed in the late Seventies.) In the middle of the park was the town, equipped with a saloon and a movie theatre. All the little buildings fit the period.

Here’s the weird part. Long after it closed, a large chain link fence was erected, and it was evident that the town was inhabited. Curious, my mother and I decided to investigate. We drove through the open gate onto “Main Street.” The town was as I remembered it—cheap reproductions of Clint Eastwood type western buildings. Suddenly people appeared at every door, and approached our car.

“This is a private town,” they said. It was beginning to feel very “Night of the Living Dead”-ish, so we quickly left. I never did find out who those scary people were, or why they lived all together in tiny make-believe homes. –Rene 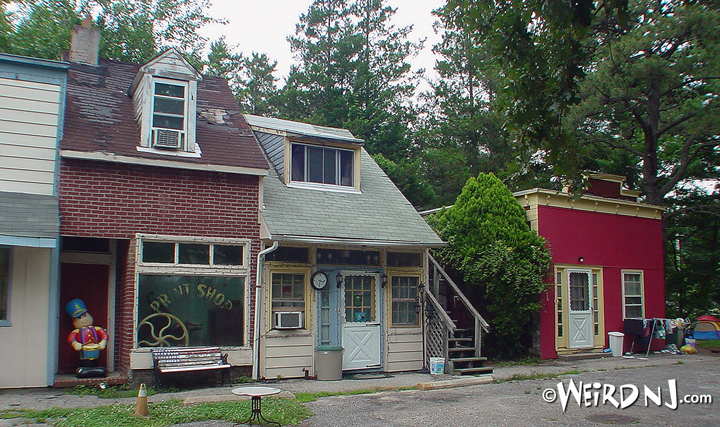 The Failed Venture of Adventure Village

I thought I’d let you know that I was at Adventure Village as a kid. Little Johnny from “Call for Phillip Morris” fame had money invested in this and also operated the train. He was one of the advertised attractions. They had a movie theater there showing old films and I remember seeing Laurel & Hardy’s Midnight Patrol there. It had a lot of conceptual problems that new parks in the sixties had in that they tried to be Disneyland without the money or the space and you kind of wandered around wondering what you were supposed to do once you were in there. They were also too close to Storybookland, which was the preferred place for parents to take the youngsters. 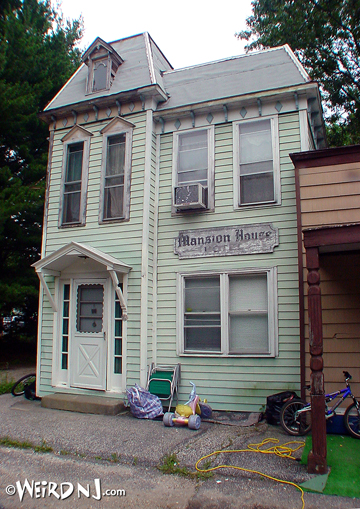 When we first got married my wife and I would go to the shore and always see lights in the buildings when we returned in the evening, even though the park had been closed for years. One night I decided to pull in and see what was going on. I was amazed to see all the old buildings still up even with the same signs and apparently inhabited, as most had mailboxes out front. Even the old train platform was still standing with information about when the trains ran. My wife wanted to leave at this point so we took off. I assumed the place was abandoned and these were squatters in the buildings, but apparently I was wrong. –Paul Verlander

The Village That Time Forgot

My friend Sandy and I headed out one day about fifteen years ago found ourselves at the gates of the mysterious Adventure Village. We snapped a few photos and headed down the winding drive with our curiosity piqued. The property was overgrown with vegetation, and hadn’t been maintained in a very long time. The buildings were arranged basically in a circle around the former post office. It was odd to come upon these very old-looking buildings and see cars parked in front and air conditioners in the windows. We took photos for about fifteen minutes, and the longer we were there the stranger it was––no one seemed to be around. Finally, Sandy saw a car coming down the drive, and we waved and found an actual resident! 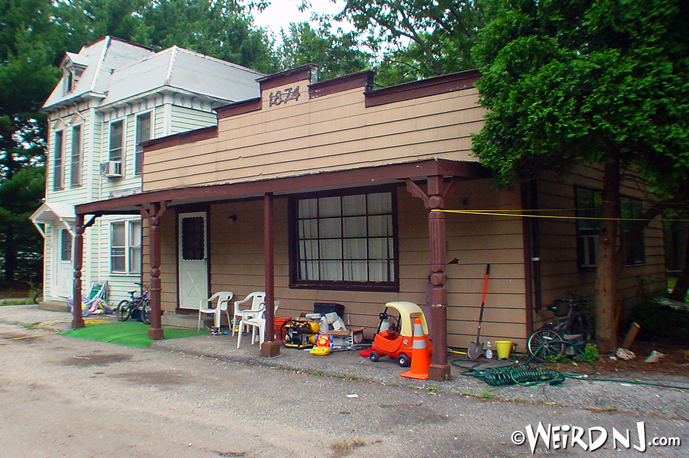 The woman was a nine year resident of the village, along with her 20 year old daughter and her boyfriend, and her young son, and all were super nice folks. Once we mentioned that we were looking around for Weird NJ, the boyfriend said “Oh, cool––I have all the issues in my room! That is the best magazine ––I read it all the time.” That kinda broke the ice. 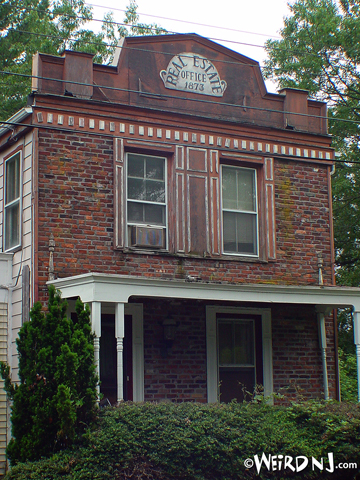 The three of them proceeded to give us the 25 cent tour, and described what the place used to look like before the decline, and said that the village was currently for sale. Apparently there is some sort of wetlands restriction on the area, and the owner can’t build or destroy any of the buildings without major legal hassles. Consequently, the owner has refused to put any money

into the place at all, and it almost seems as if he’s waiting for it to fall into complete ruin so the buildings can be removed based on a public hazard issue. A little bridge over a stream was collapsed, the pond looked like a mosquito’s dream, and the vegetation had been running wild, obviously for years. We also got to go inside one of the apartments that was vacant. With some minimal cash put into it, it could have been a very nice place.

She said that she had tried to fix things up, but it was a situation with no end in sight. She is looking at real estate now, as she needs a bit more room, and the landlord refuses to repair anything. It was amazing to think that we were literally 50 yards from Route 40, yet no one knew the place existed.

After a while, the boyfriend left for a few minutes, and when he came back he had original postcards from a box they had found several years before in their attic. It looks like the place was really swingin’ at one time. 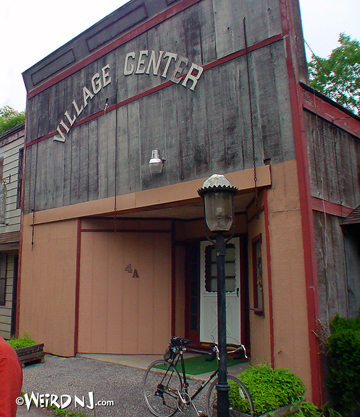 All in all it was a great trip. Then, a week later when I was getting my hair cut, I mentioned the trip to my hairdresser, and the woman giving a perm at the next chair overheard our conversation. “I remember Adventure Village,” she said with a laugh, “Our family went there every summer when we were kids––it was a big deal. What a place––they had train rides and the Keystone Cops would put on a show and we’d ride the old-fashioned cars. There was a restaurant and a theater where they would have variety shows. It was a big attraction for a while, and then it just closed––I can’t believe it’s still there.” Of all the people in town I asked, she was the only one who knew about it. –Ellen Jeranek

All that remains of Adventure Village is now just a memory, replaced in 2009 by a Kia car dealership.

The preceding article is an excerpt from Weird NJ magazine, “Your Travel Guide to New Jersey’s Local Legends and Best Kept Secrets,” which is available on newsstands throughout the state and on the web at www.WeirdNJ.com.  All contents ©Weird NJ and may not be reproduced by any means without permission. Photos by © Mark Moran / Weird NJ