In 1896, Essex County purchased 325 acres of farmland on the border of Verona and Cedar Grove to establish what was then being referred to as the Essex County Asylum for the Insane. Upon its opening, the facility came to be known as Overbrook, due to its positioning just above the Peckman River. Buildings quickly sprang up as part of this complex in close proximity to Fairview Avenue, which was then a dirt road that served as the main thoroughfare of Overbrook. 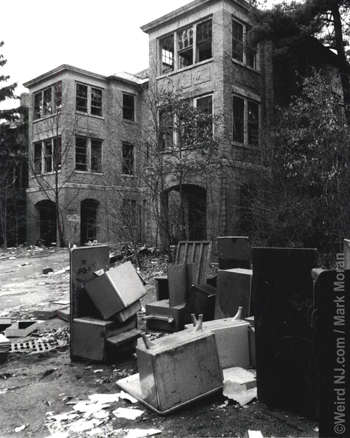 In1907 the Newark City Sanitarium or the Newark City Home for Consumptives was established just up the hill from the asylum on the border of Caldwell and North Caldwell. This was a facility aimed at curing tuberculosis, and was known mainly throughout its history as the Essex Mountain Sanatarium, or simply the Hilltop. In 1917 the county assumed control of the Sanatarium and constructed eleven new buildings on the property.

After advances in medicine made tuberculosis a treatable disease, the number of patients at the Essex Mountain Sanatarium decreased dramatically. Eventually, all of the buildings at the top of the hill would be left fully abandoned and would remain that way for almost to decades.

During those abandoned year rumors began to spread throughout the area of this isolated asylum at the Hilltop. It was rumored that the out-dated surgical implements, patient records, and medieval looking devices of restraint were still intact inside. Tales were told of the escaped or forgotten lunatics that roamed the grounds and hallways of the derelict buildings, and made their homes in the vast labyrinth of subterranean tunnels which permeated the facility’s foundations.

One warm sunny afternoon a few years back I decided to investigate this abandoned sanatarium for myself. I grabbed my camera, and bolted out the door toward my car. It was about 5:30 on a late-summer afternoon. Long shadows had already begun to lay down tracks across my path as I set out on my adventure. 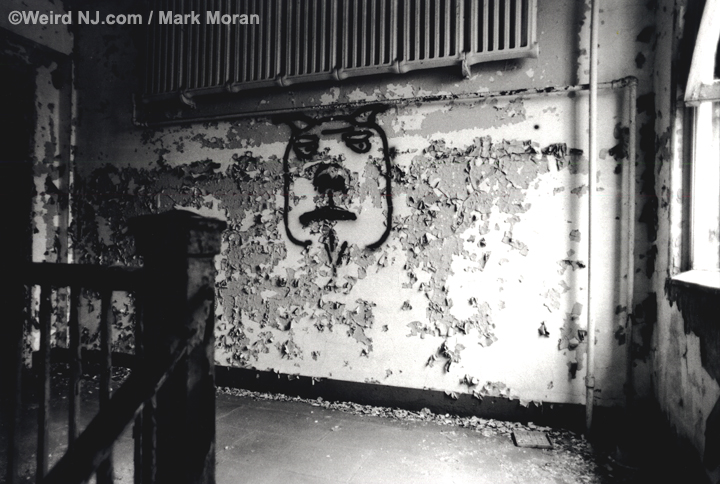 When I arrived, I parked my car at the foot of the hill and began to walk up the long, arrow-straight road before me, Sanatorium Road, toward the top of the hill where the hospital was located. The pavement was old and cracked, with a single hopelessly faded yellow line running down its center. Densely overgrown weeds and thickets covered the rolling hills, and spilled out over the roadway. Overhead, large unkempt tree branches swayed in the warm breeze, throwing skittish shadows down to the sun-dappled asphalt.

After walking for what seemed like nearly a half mile I began to see the tops of buildings poking up through the forest ahead of me. The first one that I came upon was a three story, yellow brick structure. Every window was broken, and the parking lot behind it was piled high with dozens of administrative-looking pieces of office furniture. A little further down the road, I came upon another building, broken windows at all levels, and pigeons fluttering through the darkened attic dormers. The sun was sinking low in the sky behind me as I approached the open front door.   My shadow preceded me up the steps and over the threshold. Upon entering the cool, dimly lit shell of a building, I looked up to see the spray-painted greeting, WELCOME TO HELL, over an inside doorway.

The building had two wings that stretched out in either direction away from the main entrance. These shadowy hallways were lined with small rooms, each containing a bed, small dresser, and a stand-up locker. Paint and plaster was chipping from everywhere, and all of the windows were shattered. I was surprised though at how intact much of the furniture was. Most of the metal bed frames were still fitted with a fairly tidy mattress, and the dressers were still complete with their drawers. I made my way slowly down the hall, peaking in each room as I went, and listening for any sounds of life. At the end of the hall I found a pile of patient records strewn about the floor. I picked one up and read it. It was a night-shift watch report dated from New Year’s Eve 1978–“All Quiet,” it said. All quiet it was, I thought, perhaps too quiet, and that was starting to bother me. 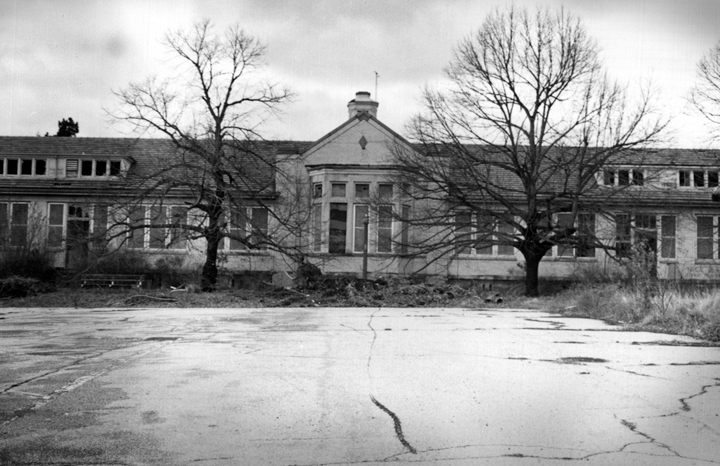 Continuing my exploration, I started up the stairs to see the second floor. Turning around at the landing I was greeted by the disapproving gaze of a horned demon. Peering down at me from the top of the stairwell, the pig-nosed, spray-painted portrait seemed to harbor a genuine contempt for my presence. I begged its pardon and descended to the lower regions of the building. Below ground level the air was cool and damp. The plaster and paint that had fallen from the walls lay in powdery piles buttressed up against the baseboards.

I made my way down the long dim corridor, slowly pushing open one door after another. Some of the rooms had been torched and were charred black from floor to ceiling. I was becoming more and more aware of the intense quiet that surrounded me. I became conscious of each hushed step of my own feet. It was then that I saw it, there in the dust where I had not yet walked–a single footprint.

All of a sudden I began to feel very vulnerable. I froze for a moment. Then I heard my father’s voice inside my head, coming to me from when I was young and used to explore the forgotten corners of my hometown. “Someday,” he had said, “you’re going to disappear in one of those places, and no one is ever going to know what happened to you.” A shiver ran the length of my spine as I stood there in the diminishing light and realized that he might have been on to something there. I hadn’t told anybody where I was going when I’d set out for this place, and if in fact I did disappear, this was certainly not the first place that I would be looked for. I did not know who, or what, might call this dank place home. What if the lunatics had indeed taken over the asylum, as the rumors of the place had alleged? I decided to cut my visit short and get back out into what remained of the day’s sunlight.

Heading back down the hill toward my car I encountered another explorer on his way up to the sanatarium. I asked him what he could tell me about the old hospital at the Hilltop. “Well,” he said, “everything was left intact when it closed; beds, instruments, gurneys. There were even padded cells with leather restraints.”

I asked him if he knew anything about tunnels under the complex. “Oh, they’re there!” he replied.  “All of the buildings are connected by an underground network of tunnels. But I won’t go in them. I’ve been in every inch of this place, I’ve even been down to the old morgue and that was really frightening. But I won’t go in those tunnels. Some friends of mine wanted me to go down there with them once, bring all the lights and spelunking equipment, but you never know–there could be gas in there now, or God knows what!”

“Did you ever hear any stories of escaped lunatics roaming around up here?” I asked.

“I don’t know if they were escapees or not, but there were homeless people and vagrants living up in the sanitarium. They couldn’t keep them out. I heard rumors that they were former inmates that had been released, then came back after the place was closed and moved in. Anyway, between them, the vandals, and the satanic graffiti all over, the place was getting quite a reputation. One time, I heard that they even found a dead body up here somewhere!”

The main hospital of the Sanatarium at the Hilltop, a gigantic hulking six-story edifice, was demolished in the early 1990’s. The remaining outlying buildings were razed ten years later 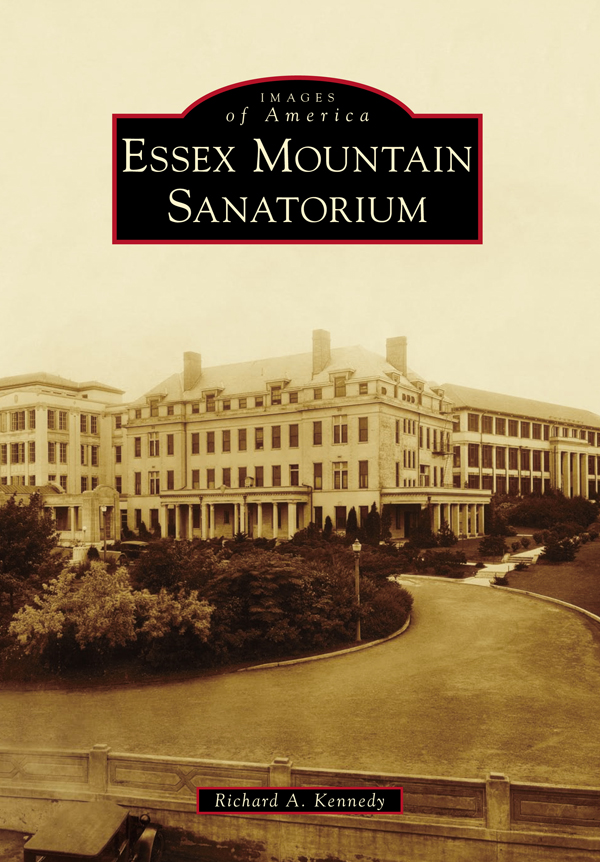 By Richard A. Kennedy

It was late summer 2012 when I first saw that letter from Arcadia Publishing in my inbox. They were putting feelers out, looking for someone to write a book about Essex Mountain Sanatorium for their “Images of America” series. Wow, I hadn’t thought about the old place in a while. Being that it had been more than a decade since the last of the complex’s outer buildings had fallen, the e-mail was completely unexpected. After a few days of thought, I initially attempted to brush it off, citing a lack of public interest, but it was too late. The seed had been planted and the hospital had already crept back into my head. I had to be honest with myself. If the story was going to be told, I wanted to be the one to tell it. It would be hard to fit writing a book into an already busy life, but it would be harder not to. The institution had been an obsession of mine, and how could I pass up the opportunity to become its unlikely historian?

After corresponding with Arcadia, I had my reservations. They weren’t too interested in the website I created on the sanatorium, or the facility’s abandoned years. Their books have a specific format that you must adhere to, and as to content, I was told they wanted “more history, less creepy.” After looking through my vintage photographs of the hospital, which totaled 38, I figured there was no way of meeting their minimum guidelines of 180 images. Despite my doubts, I signed a contract with them. I figured the writing would be a fairly simple process being that I had researched the institution before and already knew its history, but I couldn’t have been more wrong. It wasn’t simple, and as it turns out, I knew little of what had happened there. I had only scratched the surface with the website, and when I dug deeper, I found reports of sex scandals, murder mysteries, accidental shooting deaths, and learned the horrors of early 20th century tuberculosis treatment. The question of how to fill a whole book quickly became a question of how to fit it all in. It was a difficult endeavor––wanting to include the sensational, yet striving to stay historically accurate. The balance between interesting writing and just listing facts is trickier than you might think. Unfortunately, everything wouldn’t fit into the final draft, but the manuscript I submitted to Arcadia was approved, and an August 2013 release date was set to coincide with the 20 year anniversary of the demolition of the sanatorium’s main complex.

It’s hard to believe that it’s been over 20 years since I last walked those halls of the main hospital building. Time goes by so fast. I miss those days of my youth, and I miss my old playground. I know there are many people out there who don’t understand the allure of abandoned structures; the bond we form with them; or the sorrow of watching them fall to wreckers. In my opinion it’s their loss. I’m sure there are many other less fascinating pursuits than exploring urban ruins––relics from another time, eager to tell their story to anyone who will listen. As for myself, I feel fortunate to be of an age that allowed me to discover the abandoned Essex Mountain Sanatorium complex in all its glory, and, more importantly, that I listened. My life has been far more interesting having known the sanatorium. The book was a labor of love and my hope is that by writing it, I’ve done right by my old friend and that my memories of it will forever endure.

Read more about the book on the Arcadia web site.