The Legend of Bud’s Grave 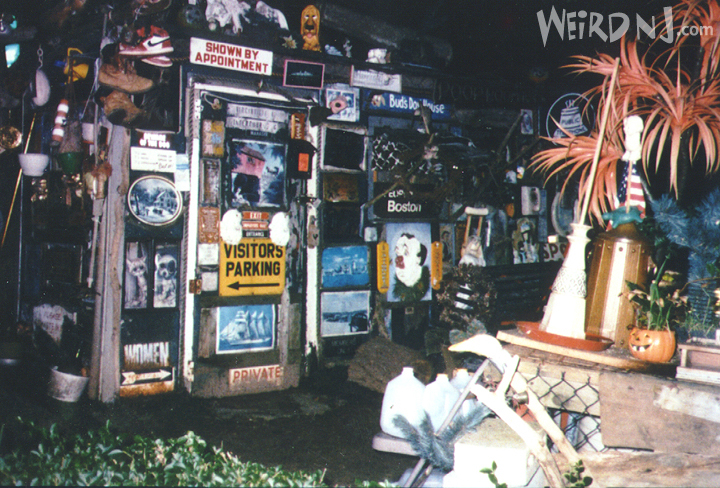 There have been many versions of the legend of Bud’s Grave, located in Highlands,  Monmouth County, told over the years, and most contain some elements of truth. For the most part the story is this: An old man lived in a bungalow he called Hollywood located on a lonely bay shore road at the bottom of a wooded hillside. His son Bud wandered away from home one day never to be seen alive again, and was presumed dead. The old man, consumed by grief, began to construct a monument to the memory of his missing son. Over time the shrine became a mass collection of toys, dolls and colorful decorations designed in a desperate attempt to lure the lost boy back home from the Netherworld. Word of the old man’s tragic loss and his heartfelt tribute began to circulate throughout his hometown and the neighboring communities.

Before long the curious began to flock to the site on late night jaunts. Many claimed to witness a strange misty apparition at the site, which by this time had become known in local lore as “Bud’s Grave”. Some believe that the apparition was the ghost of Bud himself, who would return to the dark playground on moonlit nights to play with the toys set out for him by his heartbroken father, only to disappear into the shadowy woods once more each time he was seen by his midnight visitors.

It’s a good story without a doubt, and one with proven longevity. We knew that some of the story was even factual. There was indeed at one time a site on a lonely tree-lined road in Highlands where an old man had built a structure festooned with a plethora of toys, dolls and decorative signs. We had in our Weird NJ files pictures of the site in its heyday. The old man in the story did in fact live in a bungalow across the street, which bore a sign saying “Hollywood.” We know that the site in its prime was also a popular late night destination for carloads of youthful ghost hunters. We also knew that the entire site had been dismantled by the time we first visited it sometime in the early ‘90s. 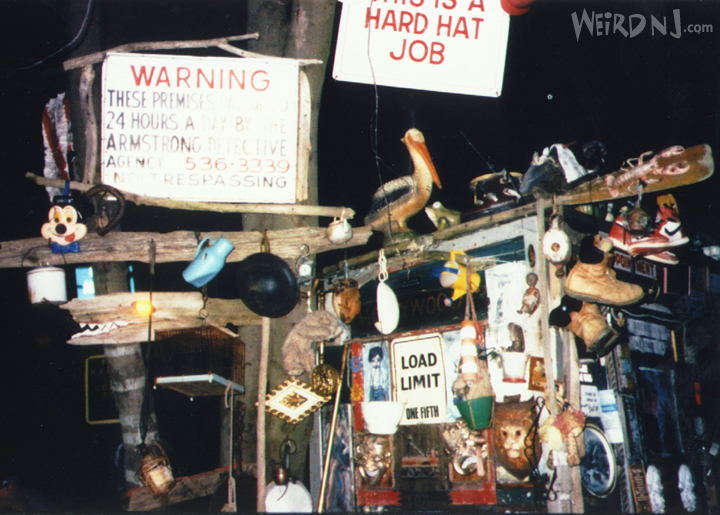 Yet people’s memories of Bud’s Grave would not let the story pass into the ages, or fade quietly into the night. Years after the destruction of the shrine Weird NJ continues to receive letters from our readers telling us about the site as if it is a mystery still in the making. Bud’s Grave literally seems to have taken on a life of its own, despite the fact that its creator is now long gone, and the site itself was destroyed over a decade ago.

So imagine our surprise when one day we were at an magazine signing party in Red Bank and all of a sudden a man in a suede fringe jacket, cowboy boots and a Western style belt buckle moseyed on up to us, pointed to a picture of Bud’s Grave featured an issue of Weird NJ and said, “Hi, I’m Bud––of Bud’s Grave.”

Mind you, although the story was always one of our favorites, we never really believed that there was ever an actual flesh and blood BUD! Nor could we ever have imagined that one day we’d be standing shoe to boot with him in downtown Red Bank! But there he was, big as life. He had a wistful grin and a kind of mischievous twinkle in his eye, which at first made us suspicious of his claim to the Bud identity. But when he produced his business card and we read the name Buddy Rodgers and the address which we knew to be the location of the Hollywood bungalow, we knew he was the real deal.

Of course we seized the moment and set up an appointment to interview this walking talking icon of New Jersey folklore.

WNJ: So, we’re standing on the site where the original… umm, what would you call it?

“This is the site where the original legend began, from the seeds of collectibles gathered by a gruff, rugged man––my father. This whole area was full of odd collectibles. Dogs, statues of little angels, girls, everything imaginable, wagon wheels. Anything one might collect, some nautical stuff. My father collected it over the years.

“Originally was a shower house. Before it became my father’s tool shed. The coldest shower in the world! Everybody used to come up (from the beach), and they were hearty souls, and they’d go into the shower house. There was no hot water. The cold water came out of the spring, so it was freezing! “

What made him start putting together what came to be known as the “Bud” site––the monument? 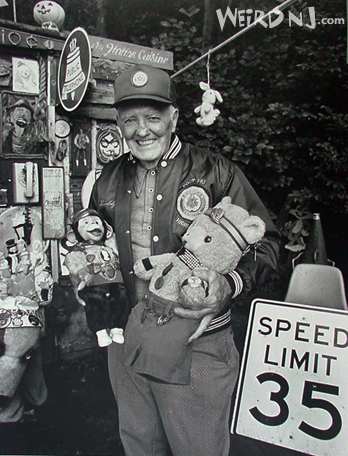 “One thing led to another. What happened originally was, you had the shed, and you had this big open area. Us kids came along, and my father was really great with his hands. He would pull branches off the trees and carve a shark’s head on it. You’d have it as a walking stick. He’d carve your name on it and what have you. Then he built little piers, all these little canals that run by here, my father built miniature piers and little marinas. I had my boats and stuff in there. Then as we abandoned it growing into our teenage years and went on to the service, he started collecting things. And he collected and he put things up and it went on from there. It was decades in the making.”

At what point do you remember hearing for the first time the site referred to as “Bud’s Grave”? 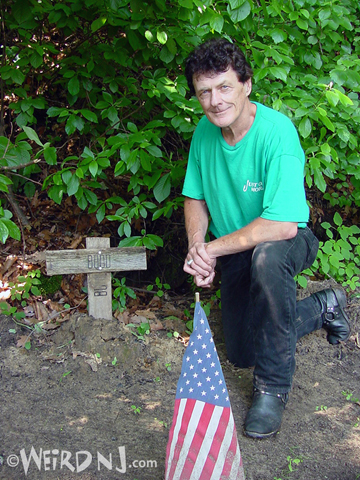 “That was 1963. It kind of aggravated me to begin with to even hear something like that was going on. There were rumors: One that I was killed in Vietnam, and they started to put these things there for me. My mother couldn’t face it, and they put a lot of my boyhood stuff over here. The other rumor was that I had drowned, at a rather young age, and they put all that stuff over here.

“I’d be down in Manasquan at the Osprey or something like that, the famous bar down there, as a college student. After the Navy I went to college. And I’d mention Bud and Highlands and they’d go “You ever hear of Bud’s Grave?” I’d be up in New York City and hear somebody say, “You ever hear of Bud’s Grave?” I slowly started realizing how big this had grown. I started to see pictures of the ‘Grave’ in restaurants in Red Bank.”

Your father maintained this site until he died, right?

Right. And in fact, just before he died, he had a dump truck come over here and take care of everything. So this is it, this is what remains (pointing to a handmade cross). What remains is what’s here and what’s in people’s minds, memories, and fantasies.

I grew up near Sandy Hook and I remember Bud’s grave quite well. I was 17 years old and I remember a child that had recently been reported missing—that was Bud. They never found him. The police searched for a very long time and still did not find Bud. His parents were full of anxiety and very bereft. So, the father of Bud had left toys out there for a memorial, hoping Bud would return home. Well, he never did. Later on, teens would use that place for a hangout place and smoke there and leave stuff, mostly their old toys. I will probably leave toys out there because I have heard from my friends that there really is a ghost that appears on some nights in a glowing white haze. –Brad C.

As a native New Jerseyan, I made many a trip to Bud’s Grave, often bringing along friends and family. On one such occasion, I met an old gentleman rearranging some of the “offerings.” I inquired if he knew anything about the place’s origins. He suddenly produced a set of keys and opened the door to the shed on the site. The inside of the door was lined with newspaper clippings written about the site over the years. He chuckled as he related the story of how this all started.

It seems the old man (never got his name) had a dog named Bud. After a long and fruitful life, Bud left for that great fire hydrant in the sky. The old man, who loved the dog very much, felt obliged to give old Bud a proper funeral. He took Bud’s remains across the street and buried him on the side of the road, marking the site with a sign that read ‘Bud.’ He also placed some flowers, and some of Bud’s favorite dog toys.

The next day the old man noticed that someone had added some dolls and knick-knacks. He didn’t think anything more about it until he noticed that over the following weeks, more and more items were being added. Kids hanging out started adding items and concocting tales about the mysterious origins of the place. This made its way into numerous college papers, with the story of Bud, a young boy who died of various means becoming an Urban Legend. –Mike N. 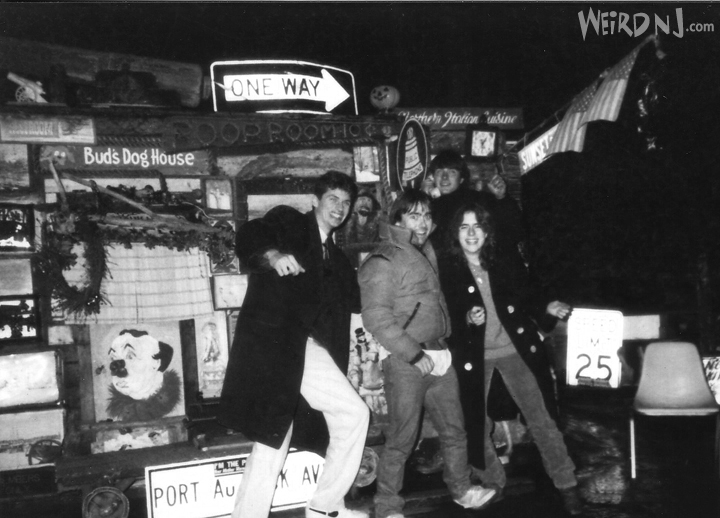 Weird NJ reader Lee Forman, shown here with friends Charlie, Wendy, and Norm, went to Bud’s Grave on several occasions after a night of carousing back in the mid-80s. Lee remembers, “I am positive I used a timer, which is why I was running to get into the photo. I have to say I look like an idiot – that was the 80s.”

Going Inside the ‘Grave’

Like many Monmouth County residents, I grew up hearing stories about Bud’s Grave in Highlands. The story I came to view as the “truth” was that Bud was a young man from  Highlands who was drafted during the Viet Nam war and was killed while on duty. His grieving father built “Bud’s Grave” as a tribute to his son. The memorial included toys, furniture, lawn ornaments, etc., that Bud had owned and enjoyed as a child. I found this story to be much more believable than the one that said that Bud died in a car crash or that a very young Bud climbed the cliff in back of Bud’s Grave and fell to his death at the very spot where his father eventually built his tribute.

In 1985, I took my husband, who is from Georgia and was completely unfamiliar with the legend(s) of Bud’s Grave, to view the site. Feeling very brave, we got out of our car and began touring the site. Shortly after we arrived, an old gentleman emerged from a house across the street. He asked if we were enjoying his display and wondered what we had heard about it. I related the tales I had heard growing up and the man laughed out loud.

He went on to explain that his name was Bud and he had arranged this display simply to amuse himself. He then brought out a ring of keys, and used one of the keys to open a locked shed that was on the “grave site.” Inside was an amazing collection of photographs, many early examples of trick photography, a la the infamous fairy photos, and many others depicting Bud’s Grave in various stages of development. I believe that Bud died of cancer a few years later. I’m really glad I got to meet him. Even though he destroyed the legend for me, I did get to see a side of Bud’s Grave that few people saw. –Anne D.

You can read more about Bud’s Grave and all of our state’s other local legends in Weird NJ magazine, “Your Travel Guide to New Jersey’s Local Legends and Best Kept Secrets,” can be found on newsstands throughout the state and on the web at www.WeirdNJ.com.