Weird NJ reader Cindy Prusik wrote to us telling of a very unique and unusual grave stone she found in Riverview Cemetery in Trenton. Cindy writes:

“Riverview Cemetery is the home to many interesting landscapes and gravesites. The most interesting one I’ve located is a tombstone immediately to the right of the monument for Civil War General George McClellan (who was also a governor of this fine state), which is so tall that it can been seen almost anywhere on the grounds. 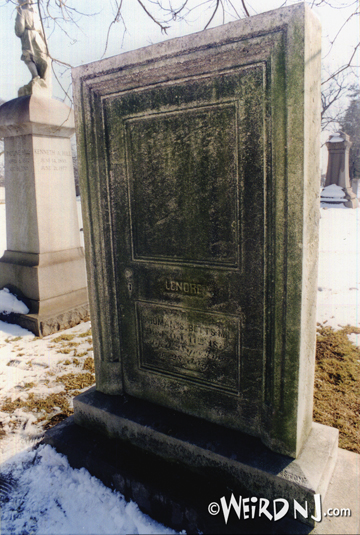 The stone next to it is in the shape of a small door, complete with a nameplate and doorknob. Here’s where the mystery comes in: Have you ever read Edgar Allan Poe? Sure you have. And do you remember his poem, “The Raven”? Of course you do: “The raven…rap rap rapping on my chamber door…nevermore…Lenore,” etc.

Well, guess what sat perched atop this tombstone shaped like a door? That’s right, a raven! Creepy, huh? It gets better. Guess what the nameplate on the door reads? That’s right, “Lenore.” And on the jamb above the door, inscribed neatly, is the word, “Nevermore.”

Did this person just have a fascination with Poe? Or is it someone who knew him well (Lenore, perhaps?) that’s buried here?”

This tombstone is a tribute to Edgar Allan Poe, incorporating elements of the master of the macabre’s most famous poem, “The Raven.” Almost 140 years of weathering on the

limestone tablet have made its features are difficult, but not impossible, to decipher. It’s definitely carved in the shape of a door, complete with a jamb, molding, knob and keyhole. The word “Nevermore” is almost undetectable, yet undeniably present across the top of the stone door’s frame. Above the stone once rested a sculpted bust of Pallas Athene (the Greek goddess of wisdom) with a raven perched atop her head (as described in Poe’s verse). It is plain to see the figure was indeed mounted there until fairly recently, but by talking to the superintendent, we learned that the statuette had been stolen in the late 1990s. We were also told that at one time the door even had a marble doorknob, but due to acid rain and deterioration, the knob broke off or withered away. 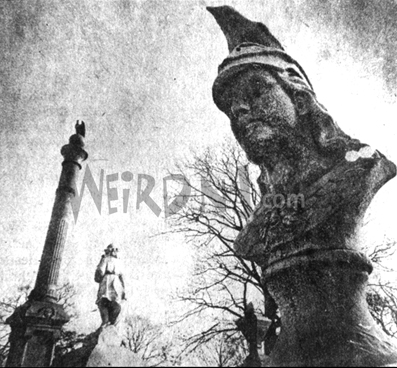 Though not at first visible to the naked eye, the name “Lenore” became more pronounced on the stone door’s nameplate after we gently rubbed away several years of growth and dark green moss. The name of the deceased, Truman F. Betts, MD, appears below this, accompanied by his death date: October 11, 1872. Aged 28 years, 3 months, and 28 days.

The Riverview Cemetery calls this stone the monument of mystery, because the man who is buried there is a bit of a mystery himself.

According to an 1872 obituary, Truman Betts died in Trenton by taking his own life, after traveling to Florida and Europe to try and regain his failing health. They mystery is why the doctor’s relatives had such a stone placed on his grave. Did Truman himself design the stone in anticipation of his death, much like Poe, who was preoccupied with death and the hereafter?

Trenton historian Charles Webster has his own thoughts about the Poe tombstone. 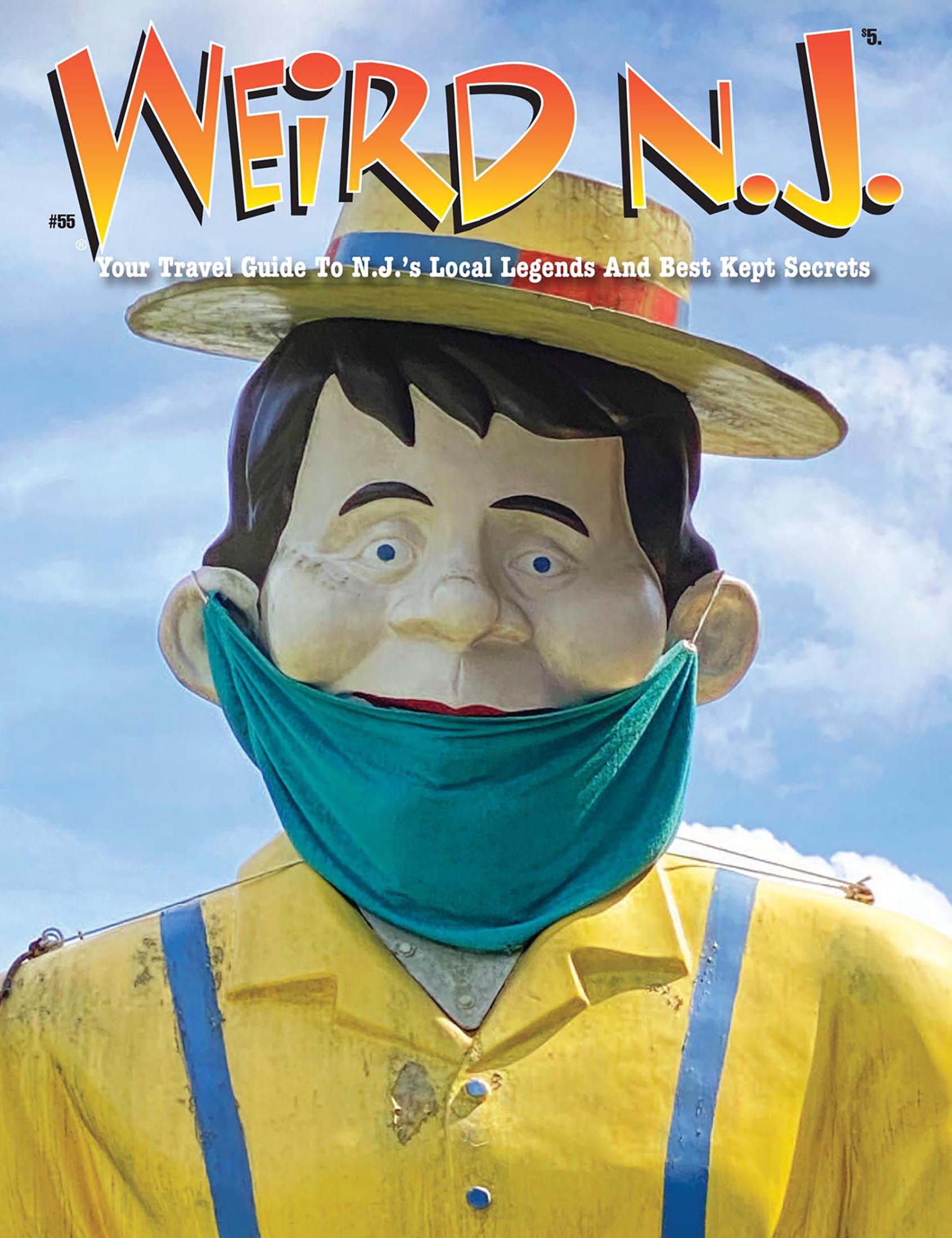 “The local legend around here is that Betts was obsessed with a woman who lived in New York and had asked for her hand in marriage, but she refused. Eventually she married another man, which is probably what drove Betts to suicide.”

Webster was trying to raise money to recreate the bust of Pallas and the raven. It is a well-known fact that Poe would frequent graveyards for their “atmosphere” and for inspiration. Maybe Truman Betts wanted this monument for future writers to aspire to. During the 19th century, it was not uncommon for wealthy Trentonians to stroll the Riverview Cemetery to view the art and architecture, much like a Sunday stroll in the park. 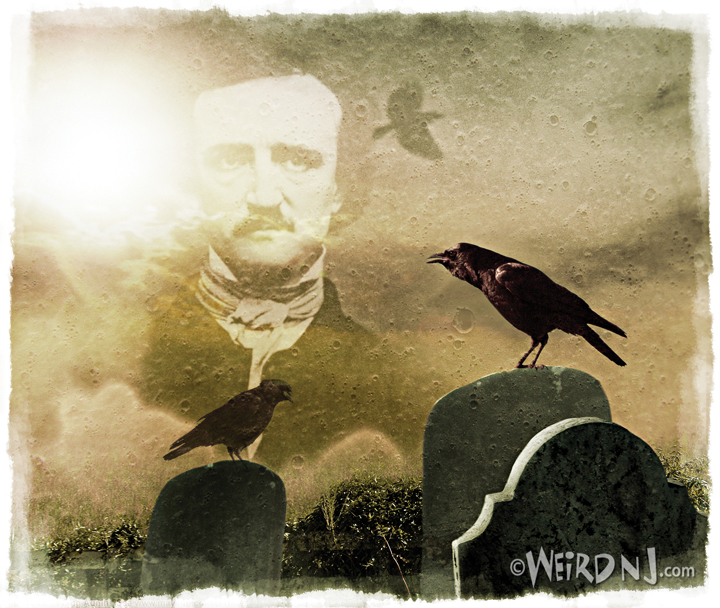 With many modern-day tombstones in the shape of light bulbs and Mercedes reflecting the life of the deceased, it is curious to find this 130-year-old tombstone slightly out of place amid the conservative Victorian features of the cemetery.

“Actually,” said Webster, “at the time the stone was put up, there weren’t many stones in that section, so it really did stick out even then.”

We noticed the tombstone cutter’s signature was George Weston, and we’d like to recognize him for his unique, ahead-of-his-time approach to stone carving, and to secure his work’s place in weirder history as the one and only representational tombstone for a specific literary masterpiece.