From Shrooms to the Tomb in Edison

Poor Richard and Charles Hoopar. Some time in 1693, the brothers came across some mushrooms in the vicinity of Edison, New Jersey and decided to eat them. Maybe they found them in the woods and scarfed them down then and there, or maybe they consumed them in a meal prepared by a family member, but the result was the same: they died within a day of eating the mushrooms and were buried together under a ledger-style gravestone in what is today the Old Piscatawaytown Burial Ground in Edison. It was reported in Reader’s Digest as being the oldest known recorded case of mushroom poisoning in the US. The stone is still there today, though it’s not easy to read. It says: 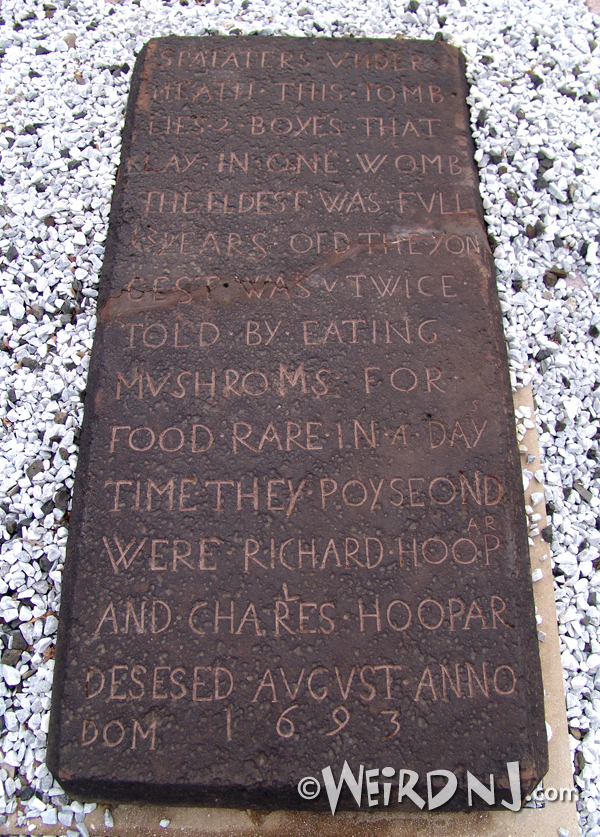 LAY IN ONE WOMB

THE ELDEST WAS FULL

FOOD RARE IN A DAYS

Weird NJ reader Evelyn Williams provides a translation of the stone’s now antiquated language: “Spectators, beneath this tomb lay two brothers, aged 12 and 10 years. They died within one day of eating poisoned mushrooms. Their names were Richard and Charles Hoopar and they died in 1693.” 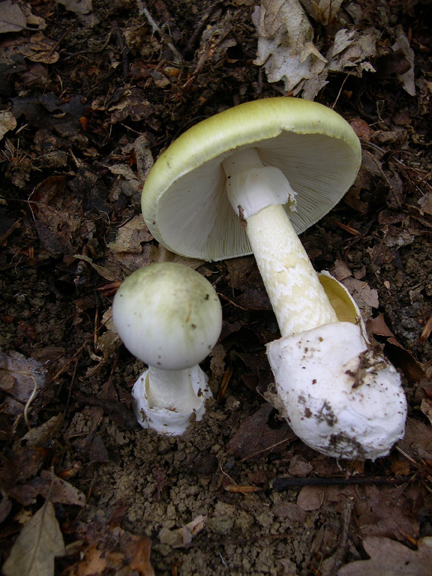 But what mushroom could have been the culprit in cutting the boys’ lives so short? AmericanMushrooms.com provides a likely candidate: the Death Cap, also known as Amanita Phalloides. It’s rare, but not impossible to find, under oak trees in the state. In September 1911, a number of deaths and illnesses attributed to eating the same kind of mushroom were reported in the New York Times, including the deaths of two people in Paterson. The mushrooms sprouted up after heavy rains broke a long dry spell. A fungus expert at the Bronx Botanical Gardens gave the Times a description of what he called a “Death Cup”: “…fine looking, with the cap usually white, though it is sometimes dark; the gills on the underside white, and also the stem, the ring on the upper part of it and the cup on the bulbous base from which it takes is popular name.” He added that its poison, “dissolves into the corpuscles of the blood and there is no known antidote for it.”

An antidote of sorts would come in 1928, with the discovery of penicillin, though even now treatment must start immediately. If not, the poison destroys the liver, making a transplant the only option, which was definitely not an option for poor Richard and Charles Hoopar. 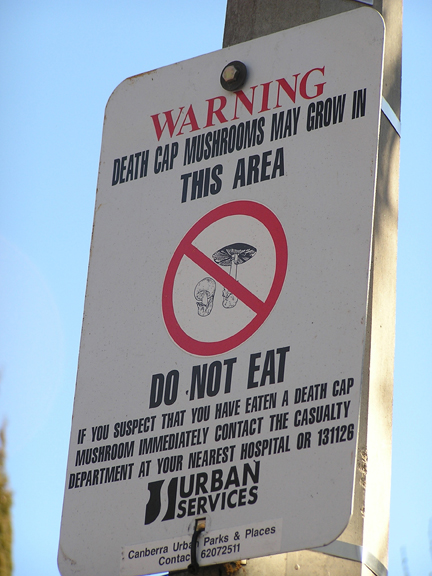 Keep Off the Poisoned Kids, Kids!

The mushroom twins are buried directly across the street from a house we lived in for about 10 years in the 1950s. We were never allowed to step a foot on the graves. For sure, a bony hand would reach up out of the ground way below and grab our feet if we dared tread on their burial plot.

When I was a child I remember sitting by an upstairs window after dark and staring out into the graveyard. Sometimes the foggy mist provided a good ground cover for the ghosts and spirits my childish imagination conjured up. If you stare at something long enough, things have a tendency to change.

It’s over 50 years ago, but that one grave stands out vividly in my mind. On the headstone is I remember reading the heartbreaking story of a brothers who died after eating poisonous mushrooms. They were buried together in one grave. I had some good nightmares after reading that marker. –Carol L. Hoffman