The Mysterious Marker of Mattie Brown 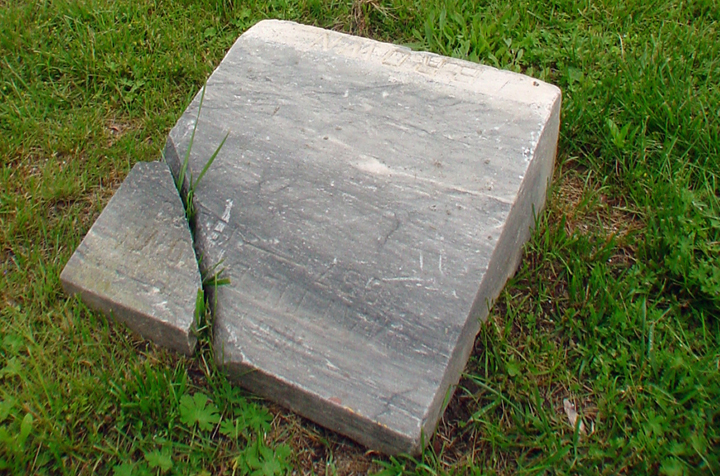 An anonymous Weird NJ reader wrote to us and tipped us off to the mysterious grave stone of an unknown woman located in Egg Harbor. They said, “In Egg Harbor Township, Atlantic County, there’s a tombstone at the police station. It was found many years ago, and after the department tried every way they could think of, no one knew where “Mattie Brown” was buried. No family was ever found, nor was a stone reported missing with that name. The tombstone is located at the base of the radio tower behind the station. It can be found at the foot of the tower facing the parking lot. But where did it come from? I have to live (and work) in this town, or I’d tell you who I am.”

When Weird NJ visited the Egg Harbor Township police station, we were not able to find Mattie’s tombstone at first. We poked around the back area where the radio tower is located, but turned up nothing. There was some construction work going on at the site though, and we thought that the stone might have been removed from the area. This made it necessary for us to do the one thing that we normally try to avoid at all costs: ask the cops to help us out. 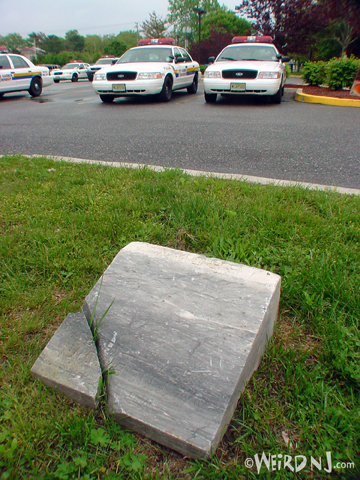 The first officer we asked about the stone we found sitting is his cruiser in the parking lot. He told us that he was a rookie on the force, and was not familiar with the station. When his partner emerged from the station house we asked him about the missing marker. This officer seemed a bit more seasoned and, after sizing us up with a suspicious gaze, began to contemplate our question. We could see immediately that he knew the stone, but it seemed to us that he had probably not given it a thought in a long, long time. Like a man who had misplaced his car keys, the officer seemed to be racking his brain trying to think of the last place he remembered seeing the stone. Then, suddenly, it came to him, and he pointed to an area behind the parking lot where a construction trailer was sitting.

As he walked us over to the site, he told us that the stone had been moved around the property a number of times over the twenty years that he’d been on the force, but it had never left the property. He knew nothing of the stone’s origins, though he speculated that it probably turned up on an old farm in town during development. He also said that there was no record of anybody with the name Mattie Brown ever living in the township.

When we found the tombstone we could see that the last move to its present location had damaged it, cracking off one corner. Mattie Brown’s name was clearly evident, as were her nineteenth century birth and death dates, but no more information was to be found. Who Mattie Brown was and where her mortal remains may lay will most likely remain a mystery, despite the best detective work of the local authorities.

When we asked the officer if we could have a picture of him next to Mattie, he replied in a stern voice, “Negative.” We left it at that.