The Fantastical Former Farmhouse of Route 9 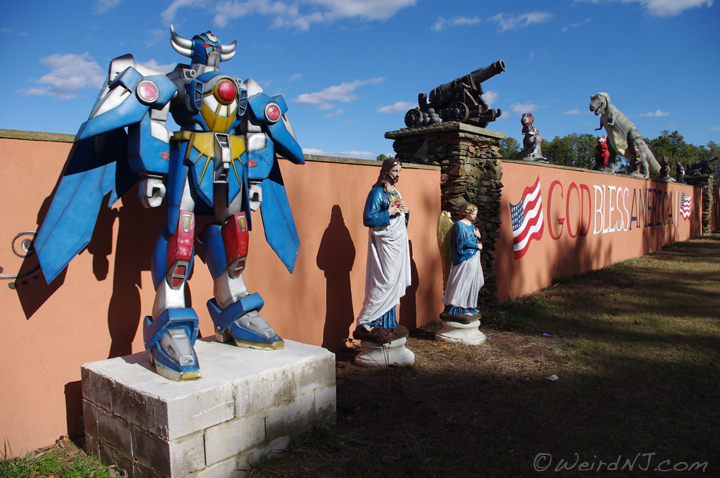 For the past few years now motorists driving along Route 9 in the New Gretna/Bass River area have reported seeing strange, some might even say downright bizarre, things popping up along the roadside. Dragons, religious icons, cannons, dinosaurs and even the Statue of Liberty herself have all been witnessed. But that’s not all! Add to that odd amalgamation of sights; brightly colored 7-foot tall Transformers, and spear-toting Roman centurion knights on stallions. All of this and more can be seen adorning a single piece of 6-acre property located just east of the Garden State Parkway, near the border of Ocean and Atlantic counties. The homestead, which is really more of a compound surrounded by a high salmon-colored stucco wall, is festooned with a weird menagerie of fanciful beasts and other figures. Emblazoned on the wall are painted proclamations like, “We are responsible for our own children…” and “God Bless America!!!”  Beyond the pink metal gates that block the driveway entrances leading into the main house, across a large yard decorated with even more statuary, a three-story stone and stucco mansion can be seen. There are three tall flagpoles in front of the home––two flying the stars and stripes of Old Glory, the third flying the flag of Korea. 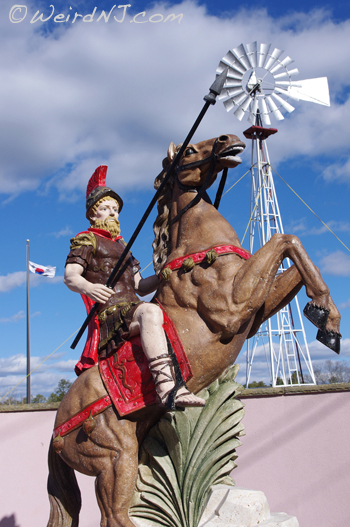 Needless to say, many people passing this unusual residence are quite curious and wonder whose property this is, and just what is the story behind this strange spectacle. The outlandish display doesn’t date very far back, just a few short years in the property’s 150+year history. In the mid to late 1800’s the property was once the farm of a man named Benjamin Franklin Headley. There was a large but traditional wood frame farmhouse on the land which is actually the underlying structure of the mansion you see today. The Headley family sold the property to a family named Bush, who kept the house looking pretty much the same as it had when the Headley’s lived there. In 1970 a Brigantine, NJ man named Eddie Sims bought the property with money he had made by selling his supposedly worthless bay front property for a fortune to Harrah’s Casino when gambling was legalized in our state. Mr. Sims told locals that his intention was to restore the old Headley/Bush farmhouse to its original historic appearance. Instead though, he transformed the old house into what one local journalist described as “a cross between a Greek diner and the Playboy mansion.”

Mr. Sims eventually moved on and the property stood abandoned for about 15 years. Then in 2010 it was purchased by a Mr. Byung Taek Kim of Fort Lee, NJ. Mr. Kim, who is Chairman of the Taekwondo Association of Greater New York, bought the property for the sole purpose of renovating and remodeling the estate into a summer shore retreat for his family. It’s kind of like their own private family fun park. Since 2010 Mr. Kim has been adding buildings, changing around the landscape, and stocking the ponds with bass and koi. The property now boasts a horse barn and riding path, a large swimming pool with a footbridge over it, fountains, waterfalls, vegetable gardens, and lighted tennis courts. And that’s not even mentioning the more offbeat decorations that can be found around the grounds, like the 400-year old statues of Buddha, the 20-foot tall giraffe sculpture, or the bright red winged dragon! Mr. Kim himself is the mastermind behind all of this madness and décor is all placed according to his own specifications. 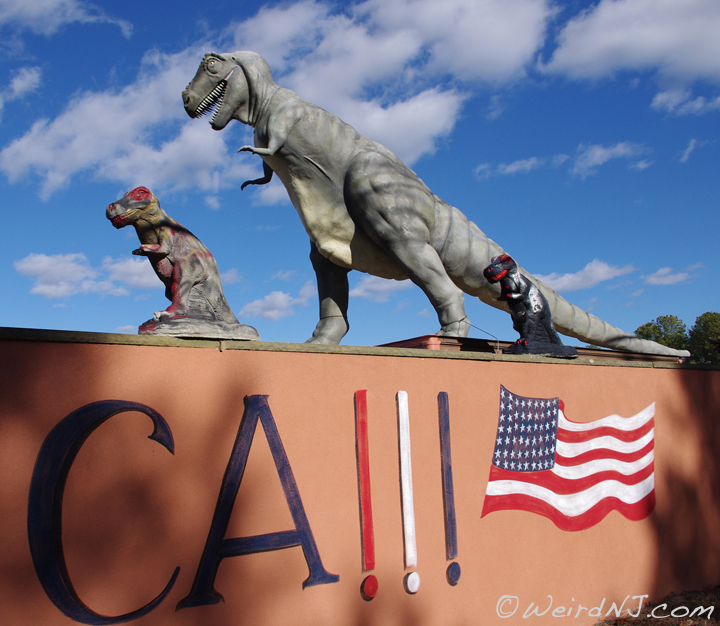 We have received dozens of letters and emails about Mr. Kim’s creation here at Weird NJ, and as far as we can tell, the locals all seem to be pretty amused by the whimsy of it all. Most have told us that they enjoy watching the progress of Mr. Kim’s undertaking and look forward to spotting new and even more outrageous decorations, which are constantly being added. So the next time you’re traveling down Route 9 in the vicinity of Little Egg Harbor, Bass River and New Gretna, keep your eyes peeled for what just might be the most uniquely personalized property in all of Weird NJ…and that’s really saying something!