The Haunting of Rolling Hills Asylum 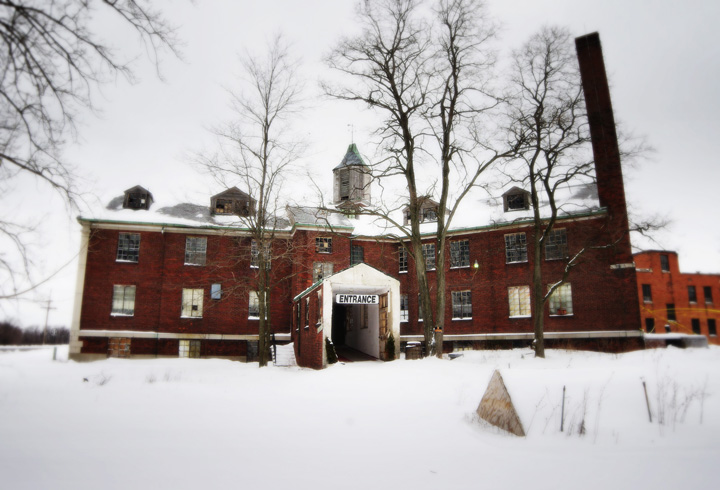 There’s a hotbed of paranormal activity in the tiny northwestern New York town of East Bethany known as Rolling Hills Asylum–an immense, abandoned looking former almshouse. The property was established on January 1, 1827 as the Genesee County Poor Farm, and through the years it has operated as an infirmary, orphanage, tuberculosis hospital and nursing home. Over 1700 bodies are believed to be buried here in unmarked graves, and a plethora of supernatural activity has been reported at the asylum, including; disembodied voices, door slamming, footsteps and full body apparitions. There are stories of shadow people, ghostly touches, and numerous EVP recordings. 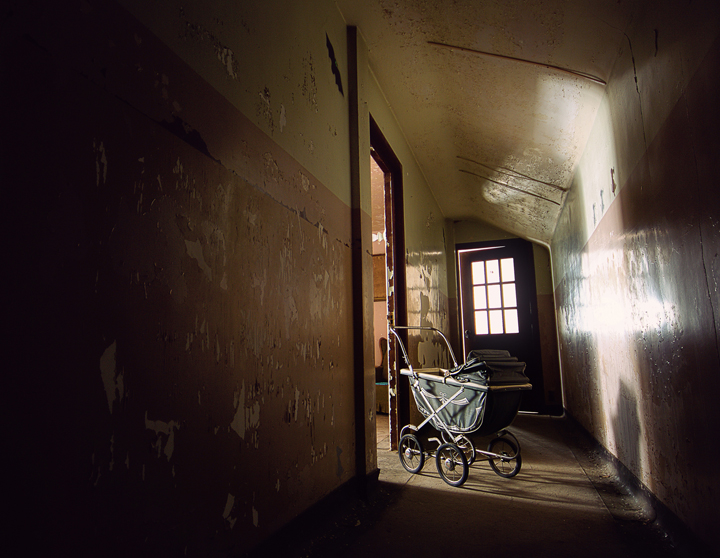 Weird NJ was invited to tour Rolling Hills for ourselves this past winter by the current owner, Sharon Coyle and we just couldn’t pass up the opportunity for a paranormal road trip! We arrived at the Asylum on a bitterly cold day in early March. Rolling Hills is located near two of the Great Lakes, Ontario and Erie, between the cities of Buffalo and Rochester. There was about a foot and a half of snow on the ground and the lake effect winds swept it in drifts across the bleak frozen landscape. We met Sharon outside her house, which is on the Asylum’s property, and once served as a woodshop where inmates crafted coffins.

If there is anyplace that can be said to “look haunted,” Rolling Hills certainly fits that bill. The older four-story brick structure, with its broken windows and pockmarked slate roof, has the appearance of the classic institutions of a bygone era. The adjoining newer facility behind it has the stark unwelcoming look of an abandoned hospital. 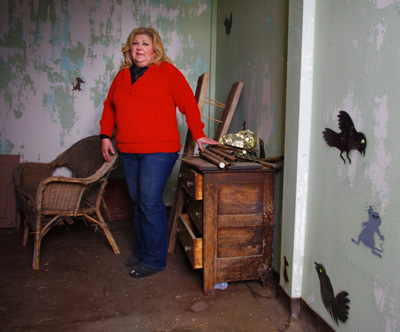 Sharon took us inside, where the air was just as frigid as it was outside the building. We could hear the wind moaning through broken windowpanes as she escorted us down the long dim corridors of vacant rooms, which had housed thousands of inmates over the years. As we walked the echoing hallways she offered us a bit of history about the place.

In ’64 Rolling Hills became the Genesee County Nursing Home, but it the facility was only used in that capacity for ten years it was finally closed in 1974, mostly because of code issues. At that time, due to fear of vagrants moving in and vandalism, most of the old dorms were torn down as well as many of the outbuildings.

We asked Sharon to describe some of the paranormal “hot spots” that Rolling Hills is known for and to share some of her own experiences with us. Here are just a few… 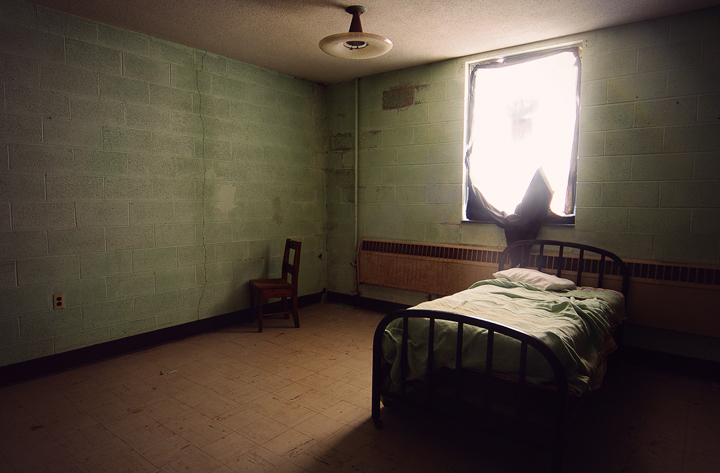 Hattie’s Room: First floor of the East Wing. Sharon says she left a tape recorder running in the room and caught the distinct voice of an elderly woman calling out “hello”. She believes it to be the voice of a former patient of the nursing home who was blind and used to call out hello to get the attention of the nurses. Sharon played the EVP for a former employee who was shocked to her Hattie voice again.

Roy’s Room: On the day that we visited, Sharon told us that it would have been 123 years birthday of a former patient named Roy, and that all the RHA volunteers were going to be gathering later that night in his room for a celebration. Roy Crouse is a seven-foot tall “shadow man” and everybody’s favorite apparition at RHA. Roy probably had gigantism caused by a tumor in the pituitary glands, which messes with the growth hormones. He lived out his life here and died in 1942, almost seven and a half feet tall at the age of 52.

Sharon tells a story about running into a rat in the infirmary about two months after moving into Rolling Hills. Terrified by it, she screamed and ran away. The very next day she found the rat dead on the stairs, blood oozing from its mouth as if its neck had been broken. On the wall above the rat was a giant bloody handprint. Sharon believes that the ghost of Roy witnessed her distress and killed the rat for her. 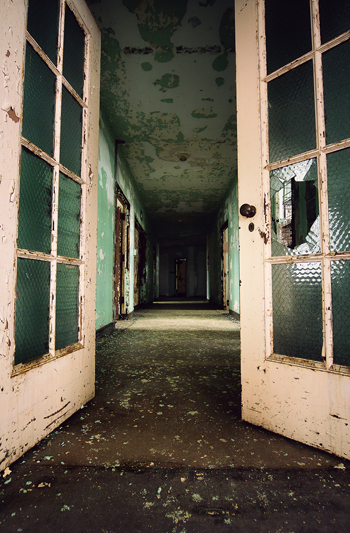 Second Floor, East Wing: In the old men’s dormitory is a corridor referred to as the “Shadow Hallway”. Sharon told us, “This is where we see a lot of shadow people. When you look down toward the infirmary section you start to see shadow people, and they could look like you and I, solid, they can be light grey, medium grey, dark grey or pitch black. They could be normal human shaped or anamorphous shapes.  They come in and out of doorways, walk across the hall. Sometimes they’ll poke an arm or a leg out, sometimes they crawl on the floor, and that can be creepy, especially if you’re sitting on the floor during an investigation and one is coming at you––because you can actually see the shadow moving toward you.”

Many a strange and inexplicable shadow was captured by the Weird NJ video team while filming inside the “Shadow Hallway” on the day of our visit to Rolling Hills.

The Psych Ward and Solitary Confinement: Sharon showed us iron brackets protruding from the cement walls of a small dank room in the basement of the Asylum, which she believes were once used to shackle inmates. “Back in the day they didn’t understand that you probably had a medical issue: Alzheimer’s, epilepsy, turrets, Asperger syndrome…or, you were an unruly wife. Back then if a man couldn’t control his wife he’d say ‘I’m going to lock you up.’ There were many, many reasons why they’d lock you up. So this area was not good.” 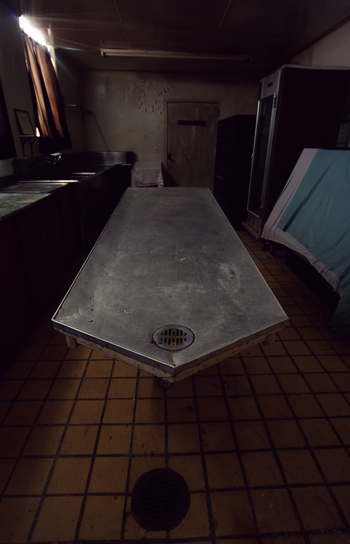 The Morgue: Next to the embalming table there are two large walk-in refrigerators, with heavy latching doors, their original purpose was for cold storage of human corpses. Sharon says the morgue is still rife with supernatural activity, such as ghostly voices and thing being moved about by unseen forces. People have even been shoved and knocked off their feet here.

The Graveyard: Even the very land around the Rolling Hills is said to be haunted, because it is in fact hallowed ground. The County would bury those who had no family, and records indicate there was once a cemetery located on the property, but the exact location is no longer known.  The cemetery has faded away as the stones crumpled, the grass grew and the forest replanted.  No one was around to care for those who had so long ago been forgotten.  No actual cemetery register or plot map has ever been discovered.

Sharon has a lot of theories as to what makes Rolling Hills the haunted hotspot of paranormal activity that she believes it is.

“It’s the only home that a lot of these people ever knew, they felt attached to this place. Some of them lost their homes, there were widows and orphans, and they developed their own family and friends here.  So I think a lot of people felt comfortable here…they didn’t want to leave So we treat our spirits like they are really breathing, living people.”

The preceding story is an excerpt from our article on Rolling Hills Asylum. For the full story of all the ghostly goings on at RHA, see Weird NJ issue #41.