The Ghost of Annie’s Road 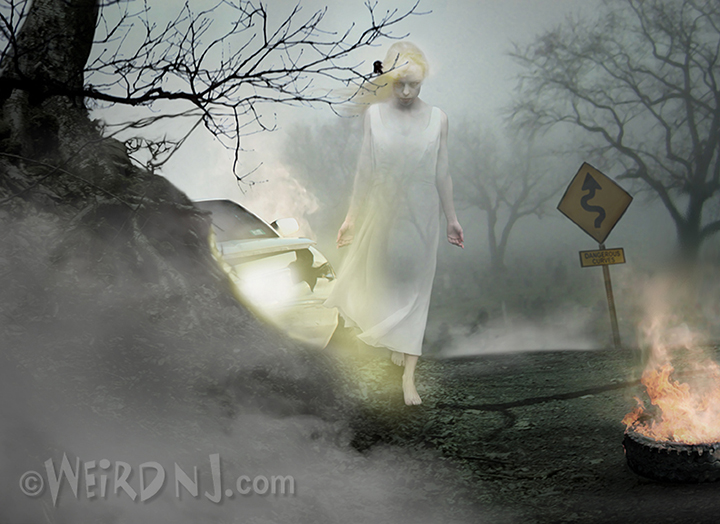 Perhaps it’s apropos that in our fast moving, highly mobile state, many of our most notable ghost are seen hanging out at the side of the road, where it is said that they met their untimely end. These roadside apparitions have been witnessed by countless motorists over the course of several generations. Unlike the popular urban legend of the Vanishing Hitchhiker though, who gets picked up only to disappear from the car’s back seat, New Jersey’s street corner spooks don’t seem to have any interest in bumming a ride. They seemed to just be content to wander their own stretch of highway year in and year out, eternally reliving their final living moments here on this Earth.

Imagine if you will, you are driving down a narrow, winding ribbon of two lane blacktop. It is sometime round midnight, and the dark pavement is wet and shiny from a recent mid-autumn shower. Multi-colored oak and maple leaves dance in front of your headlights momentarily before settling onto the slick asphalt roadway. To your left, a densely wooded hillside crowds its way right up to the edge of the shoulderless street. On your right, a low steel guardrail is the only thing between your car, and the inky black waters of the Passaic River.

Your headlights illuminating the canopy of swaying tree branches over your head. They bow down from either side of the roadway, giving the impression that you are traveling inside of a long, undulating tunnel, as you serpentine your way along beneath a clear moonlit sky.

Suddenly you find yourself drawn into a hard right curve in the road and realize that you have not been paying attention to the speed at which you’ve been driving. As you begin to regain control of your you see something that sends a shiver up the length of your spine. It’s a splash of red, there on the road and on the guardrail, which trails off down the edge of the street. Was that BLOOD? You ask yourself, as you quickly crane your neck to peer in the rear-view mirror. 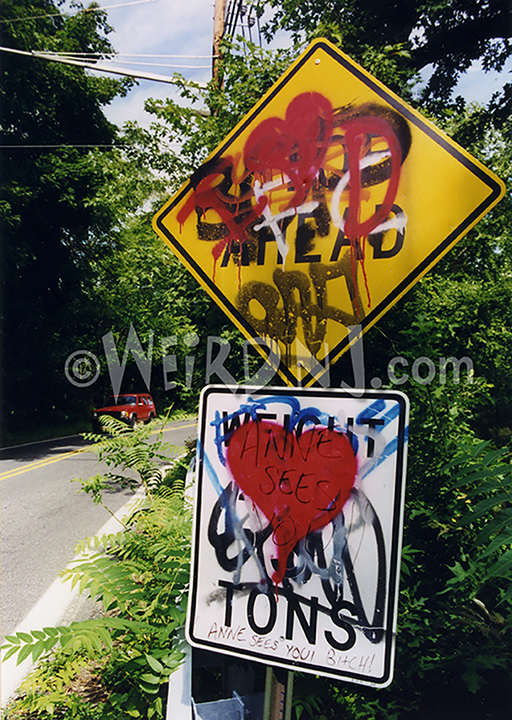 As you set your sights back on the road before you once more, you notice an eerie mist forming on the glassy moonlit river, just ahead of you and off to the right. On your left, the forest has given way to the gently sloping hills and gleaming marble stones of a vast, sprawling cemetery. All of a sudden, the mist begins to take shape in your headlights. As you flick on your highbeams you can clearly make out a distinct figure crossing the road up ahead of you. You hit the brakes and do your best to negotiate the slippery pavement. Then you watch in disbelief as the translucent mist glowing before you assumes the unmistakable form of a young woman, wearing a flowing white dress. She floats across the roadway inches above the ground, then disappears into the moonlit graveyard. You have just experienced a close encounter with Totowa’s legendary “Ghost of Annie.”

For more generations than anyone can seem to remember, Totowa’s Riverview Drive has been more commonly known to locals as “Annie’s Road.”  And for just as long, it has played host to innumerable carloads of late night thrill seekers. What these adventurous nightriders are looking for is the spectral figure of Annie herself, an other-worldly apparition that has long been associated with this snaking riverside byway.

Running along the Totowa side of the Passaic River, Riverview Drive, or “Reefer Road” as it has been dubbed by many a partying teen, seems to be just brimming with the stuff from which local legends are made. At night it is a dark and treacherous drive that leaves little room for error between the steep hillside on one side, and the muddy slough of the Passaic on the other. It is a remote and wooded road, right in the heart of a densely populated area.

There are mythical places to be discovered here as well, or so many have alleged. The isolated community located on Norwood Terrace, an oxbow street found on one of Riverview’s many curves, has long had the reputation of being New Jersey’s much fabled “Midgetville.”

But what really beckons people to Annie’s Road year after year, decade after decade, is the quest to see Annie herself. The lure of experiencing the supernatural first hand, has been the catalyst for countless late night adventures over the generations, and several notorious misadventures as well. In most cases, these ghost hunters and seekers of Midgetville are nothing more than carloads of bored suburban youth, looking for some harmless late night thrills. Annie’s Road has however, on more than one occasion lead its nightriders down a pathway to danger, and even death.  Riverview Drive is no stranger to severe auto accidents, and Annie is not that soul who has been lost there. 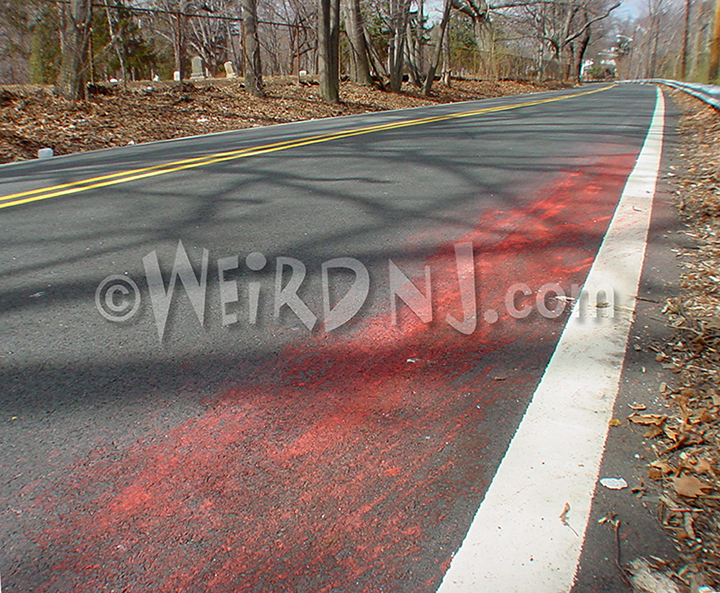 As I have been a resident of Totowa all my life, I can tell you the actual story of this poor girl’s fate. Annie was walking home from her prom at school in Little Falls. The shortest and perhaps the easiest route to take was Riverview Drive. She was passing the Laurel Grove Cemetery when a large truck plowed her over and dragged her about 50 feet or so. Her blood can still be seen on the side of the road she had been dragged. If she is to be seen she it is a short ways down the road from the blood. This is very close to the place where her tomb once is. My brother has been to the plot in the Laurel Grove Cemetery that was created for her. Though I was little, I do remember hearing that for no apparent reason at all, the tomb caved inward and looked somewhat like a cave. —Court

I have heard many stories about this road, and have been there numerous time. I was told roughly the same story that she was killed on her wedding night, and was killed on the road and dragged along it. The first time I went there my friends told me that there was a bloodstain on the road, and a splatter on the guardrail. It WAS there, whatever it was, and it scared the shit out of me. I have taken other friends there throughout the years, and have told them the same story. “Annie’s Lane,” as I have often heard it called, is a great place to bring people for a scary experience. —Marcus Freeman 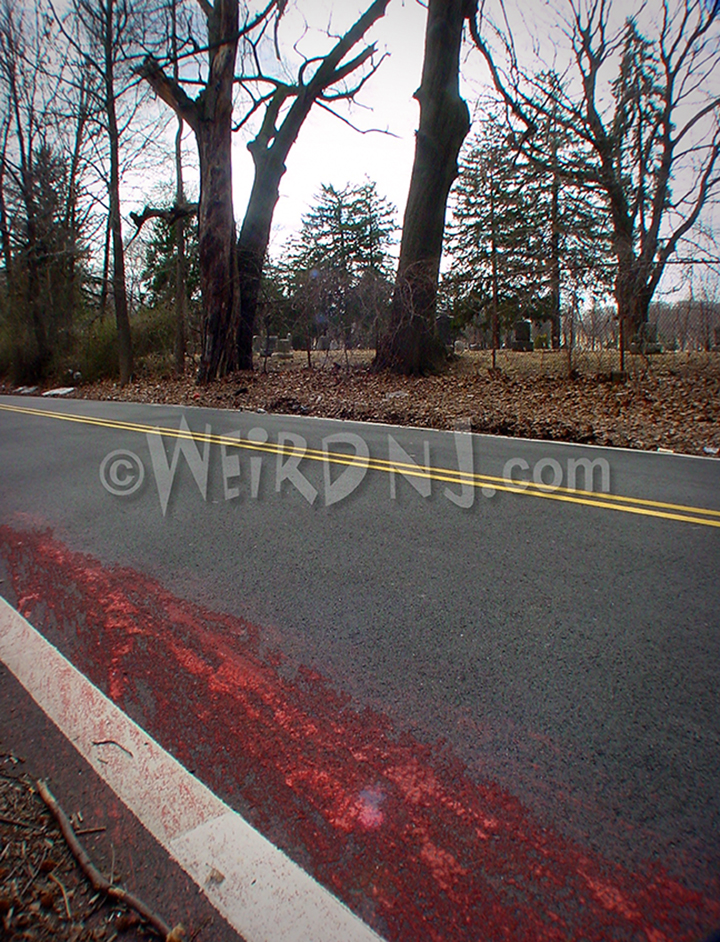 I am writing to tell you that me and some friends have seen Annie’s ghost on the side of the road near the route 80 overpass. I am from West Paterson so I know most of the legends about the road. The most popular story about Annie is that she was decapitated after being in a car wreck with her prom date. Myself and the people I know who have seen her ghost usually were not looking for her when she appeared. When you see her she appears to be a rather short girl who is dressed all in white who usually wisps away shortly after appearing.

Another strange thing that happens on that road is by the cemetery, where you can often see a flickering light moving around and about the graves. Supposedly, this also is linked to Annie’s ghost. It is thought that if you drive down the road at exactly 12a.m., playing oldies music and driving with your car’s lights out in the middle of the two lines, then you can see her in the rearview mirror. This we tried once a while ago. We didn’t see any ghost but trust me it is really scary. —Purple591

The legend of Annie’s Road as I know it is about a girl who was stood up at her prom, and decided to get drunk and walk along the road. She was then mowed down by a car full of

her high school drunks after the prom. Supposedly she haunts the road at 2am if you drive on the road with your headlights off. The road is very eerie and the graveyard glows.

Alongside of the road is a guardrail painted red, where she died. On the eve of her death every year her deranged father returns to repaint it, and meet with his daughter once more.

Annie is supposedly buried in the graveyard, and her spirit guards all other people walking along the road. At times she will appear to speeders to warn them of what happened. –Lil Poe 69