The Essex & Sussex Hotel in Spring Lake was a Jersey Shore icon and one of the New Jersey’s last grand old hotels by the sea. In its heyday the Essex & Sussex was only open for three months of each summer, when the well-to-do would vacation there to take advantage of the cool ocean breezes. The hotel hosted many high society gatherings where opulence and extravagance was the fashion of the day. It remained a very successful resort for most of the twentieth century, but by the 1970s things had begun to decline. The hotel finally closed its doors for good in 1985, and the vacant building languished away for the next decade and a half boarded up behind a chain link fence. Eventually plans were approve to remodel the grand old resort into a pricey age-restricted year-round residential condominium complex.

Enormous, yet elegant, the landmark building still towers over all others around it today, offering its resident ghosts more than ample room to move around and haunt to their spirited hearts’ content. No word yet on how the new tenants are getting along with the original guests who never checked out. 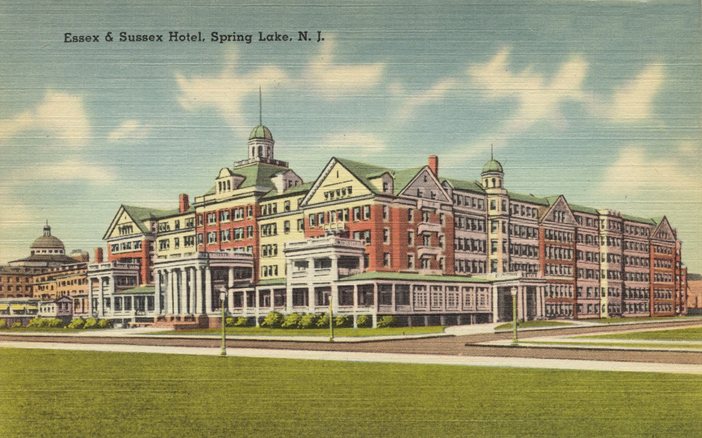 Phantom Ball at the Essex & Sussex

This happened around 1982. I was about 22 years old, working for a carpet installer as a helper. We were on a job at the Essex Sussex House, a huge hotel across the street from the ocean in Spring Lake. It was in the middle of winter, and the hotel being closed, the only people in the building were myself, my boss, and the caretaker. The job involved repairing the seam of the carpet in the main ballroom, and was a one man job after the

tools were brought in and set up. I asked my boss if I could prowl around, and he said ok, just don’t get into trouble. I really wanted to get up to the cupola at the top of the five-story building, and see the view of the ocean from there. On the fifth floor, I found the door to the cupola, and though nailed shut, I pried it open and spent 5 or 10 minutes there, looking at the ocean.

Upon coming out of the little stairway to the cupola back on the fifth floor, I was standing in the middle of hallway that ran the length of the building (very long). As I was brushing myself off, (the cupola was a mess of bird droppings and debris), I noticed, out of the corner of my eye, someone at the end of the hallway to my right watching me. I turned, and it seemed they ducked into a room. I went back to brushing, and noticed them again, only closer this time. Again, I turned to see them slip out of sight, a dark blur in the shadows. Assuming it was some other person working up there, I called out. No answer––in fact, I heard no sounds during this event. I looked to my left down the other half of the hallway and saw nothing.

Turning back to my right, again I saw the dark blur of someone moving out of sight, but it was closer yet, nearly at the stairwell to the lower floors. At that point, though I was not consciously afraid at all, my adrenaline surged, and I had the overwhelming urge to get away from here immediately. I get goosebumps retelling this even now, many years later. I ran down the stairs, and was on the main floor in seconds.

Visit our Amazon store for all your Weird needs!

Encountering the caretaker on my way back to the ballroom, I must have appeared shaken, as he asked if I was all right. I told him I was upstairs (not indicating the exact floor) and got rattled. He asked if I was on the fifth floor, to which I replied yes. He recounted a similar incident that happened to him while cleaning windows, and said he has since avoided being up there alone. He also stated that several times, late at night, in the dead of winter, when the building is totally empty except for him, he hears parties in the ball room: music, people talking and laughing, glasses tinkling, silverware on dishes. It all stops when he reaches for the door handle. –Craig Johnson