Located at 143 School St., in the North Stelton section of Piscataway, is a house that was the brainchild of Sam Goldman, a Russian born artist, musician, paper-hanger and follower of anarchist doctrines. Built in 1915 by Goldman, the home is adorned with reliefs of Bolshevik symbolism, along with some abstract and oddly placed columns. The area surrounding the house was once a farm commune, established as a cooperative organization called Fellowship Farms. It was a utopian enterprise based on socialist-Marxist teachings, and Sam was one of the leaders of the movement. 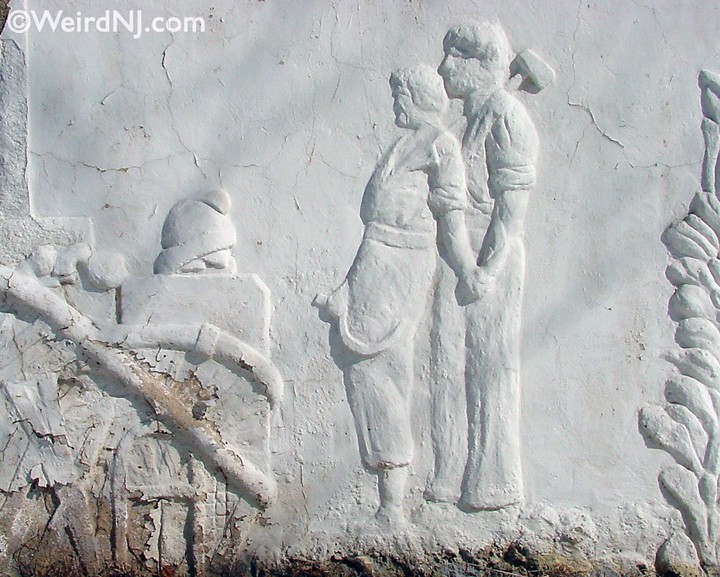 At its center was the Modern School, conducted along progressive lines by followers of the Spanish martyr-anarchist Francisco Ferrer. The school was built on land donated by the cooperative. The liberal thinking socialist founders in the area decided to give the streets names like “International Avenue,” “Brotherhood Street,” “Voltaire Street,” “Justice Street” and “Karl Marx Street” (later re-named Arlington Place by the capitalist bourgeois).In 1934 the group organized the Anarchist Federation of America, a group of theoretical, rather than practical, revolutionaries. “Sam was a hippie, a free spirit, a bohemian of the times,” said Sam’s 73-year-old niece. “What Sam wasn’t was an architect. The house was built without a level, and you could roll a marble from one end of the house to the other. I grew up here all my life and attended the Modern School. It was really something. You could learn whatever you wanted. You just told the teacher ‘I want to learn printing,’ and they taught you. The school had a newspaper, and some of the articles were written by four and five-year-old students–and they were very articulate.”

The house was constructed of wood with a plaster facade. The windows were made from shards of glass Sam had laying around the house. Rather than buy square panes, he constructed the frames to fit the glass, making each a one-of-a-kind pieces work of art.

Sam’s niece had many memories of her eccentric uncle, and we asked her to describe the man behind the anarchist: “He had the uncanny ability to paint wood grain. He would spend hours painting the knots of the wood and the lines that go around it. They still remain on the trim inside the house. He also never bought a thing in his life. He would always barter. During the 1930’s, our community, because of its beliefs, had a difficult time finding work. Sam and his brother were wallpaper hangers, and his brother was a master at it. Sam was sloppy, he had little interest in proletarian pursuits, and only did it to help make ends meet for his family. They would call him a ‘schmeerer,’ because of the way he sloppily hung the paper. He and his brother papered some buildings at the (Rutgers) University. They were always being mistaken for each other because they looked similar. He completed a full program at Cooper Union, but never received his diploma because he decided to go on a date that night (with his future bride).” 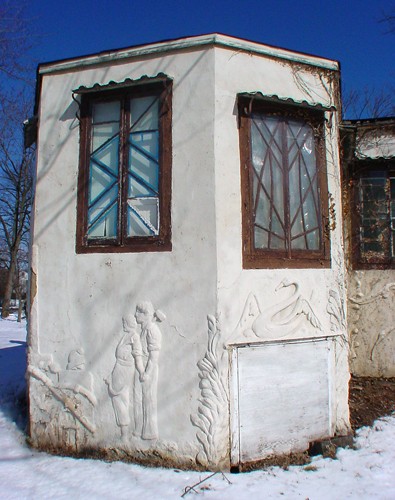 We were shown the spot where the Modern School once stood, now nothing more than weeds and an old foundation. The “Uncle Sam House,” as it is known by the family, is still owned by Sam’s son, and is rented out to students of Rutgers University. Although the flat-roofed building has seen better days, the anarchist reliefs Sam had sculpted still inspire free-spirited thinkers when they ride through the now-bourgeoisie neighborhood. Seeing this house is well worth the ride down School Street. You have nothing to lose comrade, but your chains. 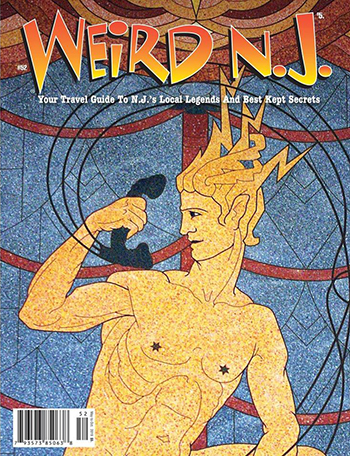 You can read much more on the story of the Goldman House in Weird NJ Issue #52,  which can be ordered through our Web Site, Amazon Store, or Facebook Shop.  To find a store near you that carries Weird NJ go to this LINK.