Traveling by a dark graveyard or cemetery at night can be a frightening thing, especially when the imagination comes into play and every crack of a stick or gust of wind lends the passer-by to think something more nefarious is afoot. Add to the experience something that’s truly out of sorts, and it can be downright frightening. Take, for example, a frequently reported odd phenomena seen in graveyards and cemeteries: the mysterious light or glowing grave. You can see it, usually from a point just outside of the burial ground

affected, and like any other unexpected things, you feel scared, confused, or curious: maybe a little of all three. You don’t know what it is, but it just feels wrong.

The Bay View Cemetery in Middletown possesses one such mysterious lighting phenomena and because if the graveyard has come to be known in local lore as the “Green Light Cemetery.” A number of people have written to Weird NJ over the years about the strange illumination that gave it that name: a mysterious green light that appeared above the cemetery’s tree line. One story behind it involves a caretaker who lived in a house behind the cemetery. He died, and each night his ghost would light a green lantern as a beacon to help the spirits — who never seem to be good with directions — find their way. To where, we don’t know. 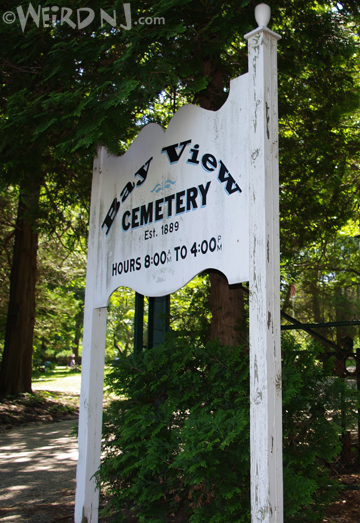 Weird NJ visited the Green Light Cemetery with reader Laura Poll, who said she once saw the green light herself in the cemetery, though it did not show itself on our visit with her. A few years later, Paul Erol, who grew up in the area, wrote the magazine and said that he “Could see the Green Light from the second story window of my home. It would take a while, but I could always find it through the trees.”

Paul grew up knowing a different story about the light’s origin.

“If you walk through the cemetery at night,” he wrote, “You will find the green light in the hills. There is a gate around a tower that swings open, and once you pass though it, the light turns red, the gates close, and the evil of the light does unspeakable things.”

Paul could see the light from his room until 1989, and its disappearance was mystifying until he’d learn a few years later that the light source, “May have been an old lighthouse that sat up in the hill, buried in the woods behind the cemetery.” Even that was cause for

wonder, because it wasn’t clear who was keeping the beacon lit (and the story going) up until that point.

He and friends located the lighthouse one night in 1993, after driving away from the cemetery and further uphill along King’s Highway, near a housing development that was at a higher elevation. The lighthouse looked, Paul said, a lot like a similar, but abandoned lighthouse “On the shore of the Leonardo beach.” People he spoke with in the community said both “were (once) used to help boats in the bay to find the shore.” The lighthouse closer to the cemetery became irrelevant when nearby trees grew tall enough to obscure it from the shoreline.

Paul visited the lighthouse again some time around 1995, but was surprised to see it had been taken down. He’d later learn that its removal caused “a bit of a stir among the older people of the town who thought it had some historical relevance.”

My Quest for the Source of the Green Light

Hosford Avenue, in the Chapel Hill section of Middletown, aka Beacon Hill, is a very unassuming and quiet area. Going virtually unnoticed along the road, nestled in the woods

at the bottom of a large hill, lies the Bay View Cemetery––which is more commonly known is local mythology as “Green Light Cemetery”.

In the evening, it’s an eerie setting, especially when the trees are devoid of leaves. Driving up Hosford Avenue, darkened by the absence of street lights, a short distance beyond a bend in the road, the graveyard comes into view, blanketed by an eerie green light which emanates through the trees from the hill above. If anyone tries to search for the source of the light, they will be forever consumed by the forest surrounding the cemetery…or so the legend goes. 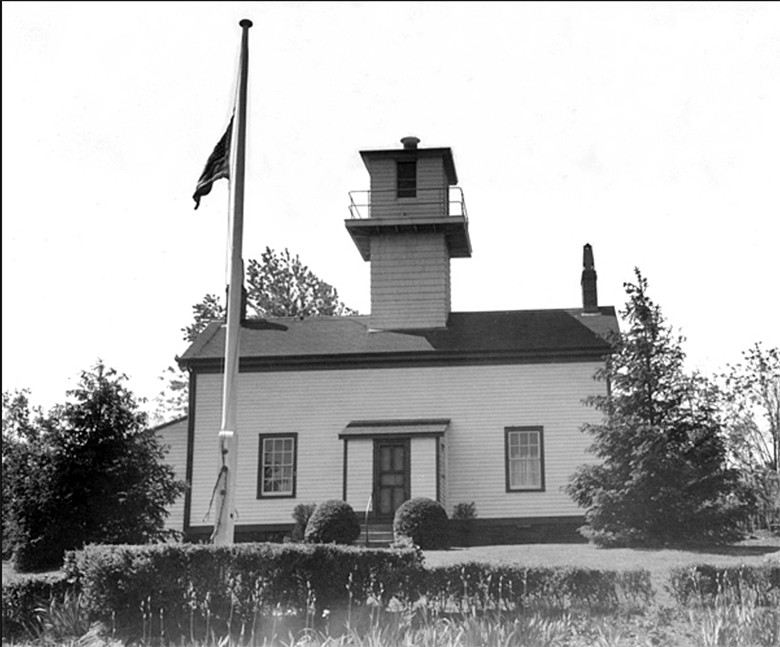 Having heard the mysterious tale for most of my life, I decided to do some research on green light a few years back and found that the proper name of the lighthouse was the Chapel Hill Lighthouse, which was erected in 1856, and was a rear range light.

[The Chapel Hill Rear Range Lighthouse was a wood frame structure with a light turret in the center and keepers’ dwellings beneath it.  It served until 1957, when it was auctioned off and become a private residence. It was replaced by a beacon atop a steel tower positioned 200 feet north of the original lighthouse. The lights were paired with Conover Beacon, located 1.5 miles to the north on the beach in Leonardo.] 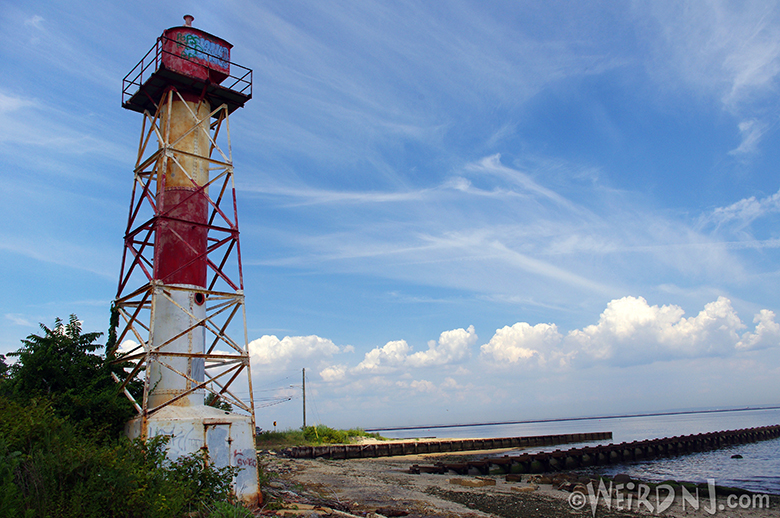 The abandoned Conover Beacon on the shore of Sandy Hook Bay in the Leonardo section of Middletown once worked in tandem with the Chapel Hill Lighthouse.

This is one of six little lighthouses, four along the bayshore in Keansburg and Middletown, and two on Staten Island. They were built to help ships navigate through the deep-water channels and avoid the shallow waters that might have stranded them in the bays. When the two lights appeared to line up (the one on the hill and the one at the shoreline), it was a signal to ships in the bays that they were safely navigating in deep enough waters. 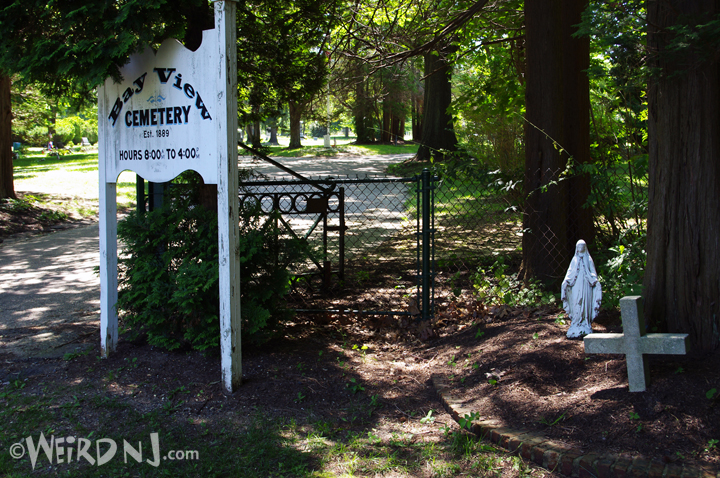 I was recently in that area at night and decided to drive past the cemetery just for old time’s sake. It had been quite some time since I had first been to Green Light Cemetery and this time land development aided in my quest to find its source, as new subdivisions there have cut many new roads into the hills behind the cemetery. As I traveled along Hosford Avenue to the top of the hill and turned left on Kings Highway East, I found myself above the cemetery. But alas, the Light is no longer casting it eerie green blanket upon the cemetery. I guess all “cool” things must unfortunately come to an end. –Dr. A. J. DeVivo