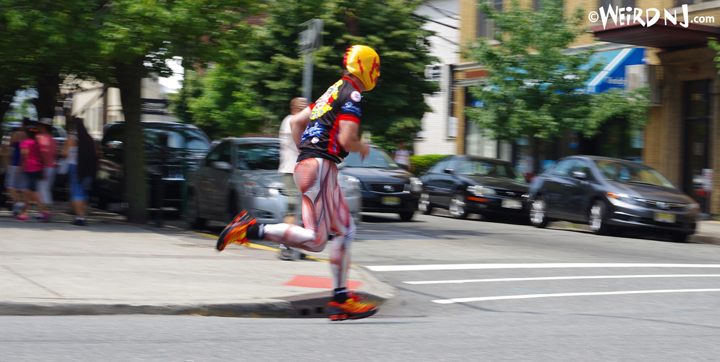 For a couple of years now we here at Weird NJ have been getting reports from our readers in Bayonne about a Spider-man-like ‘superhero’ that has been spotted on the streets of their fair city. The mysterious stranger has been described as being clad in a tight, dayglow colored full-body spandex outfit and wearing a Mexican wrestling mask, which covers his head and face. He is most often seen running the downtown streets in the middle or the day. But who is this masked man, and what is his mission in this Hudson County community? And is he fighting for the forces of good, or evil? 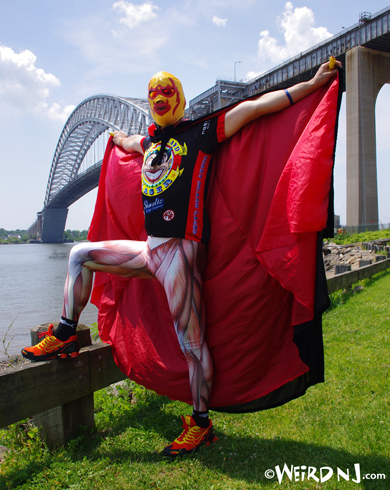 He may not be faster than a speeding bullet, but he is certainly quick enough to frustrate motorists who try to snap a photo of him with their cell phones. We’ve had several people email us pictures of this mysterious running man, but most have just been fleeting glimpses caught as he dashed by them. We even made of couple of trips to the peninsula city of Bayonne in hopes of spotting this unusual local hero for ourselves. But not knowing where he’d be running or when made finding him impossible.

Then we received an anonymous tip from a Bayonne resident telling us how to get in touch with this colorful character, as long as we promised not divulge his true identity, for he is known to the public at large only as “Captain Bayonne.”

We contacted the Captain this past summer and set up a meeting to interview him at the Broadway Diner in Bayonne. It was a swelteringly hot day in late June and the concrete and asphalt of the city made the temperature seem even more unbearable. When Captain Bayonne strode through the doors of the diner though, everything seemed much cooler. He was truly a spectacle to behold, decked out in a pimp ensemble right out of a 1970s black-sploitation movie. He wore a bright orange velvet suit, the frock coat trimmed with furry black and white tiger-striped lapels and cuffs. Beneath his wide bell-bottom pants he sported a pair of four-inch high faux leopard skin platform shoes. And yes, there were goldfish in the transparent heels. On his head he donned his trademark lucha libre wrestling mask, which was neon yellow with bright red lightning bolt appliqués. Around his neck hung ribbons and large heavy-looking running medals from various marathons. As he sashayed regally through the diner, walking stick in his gloved hand, all heads at the counter turned to gaze upon him. Captain Bayonne was in the house, and this was his town.

After introductions we sat at a booth at the very far end of the diner and talked with the Captain over breakfast. His eyes were shielded behind yellow-orange reflective wraparound sunglasses, so the only part of his body that was visible were his lips, which we watched intently as he spoke during our conversation. 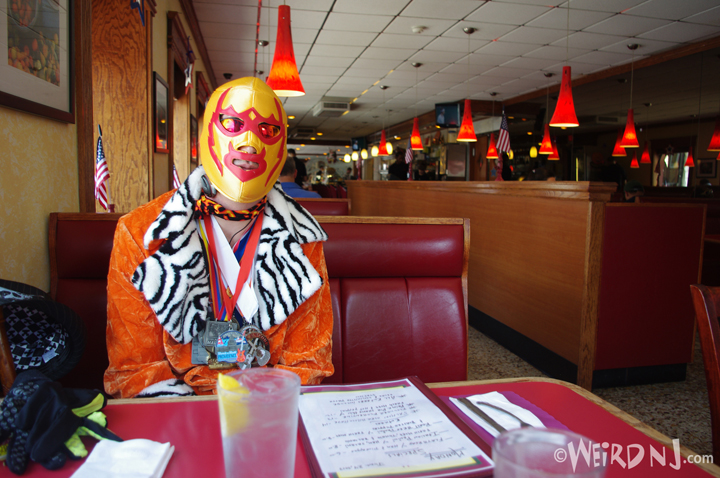 As we chatted several patrons and employees of the diner came to our table intermittently to greet the Captain, who they knew as a local celebrity. Some asked to shake his hand, other wanted to take a quick photo. A young waitress named Stephanie meekly said, “I don’t want to bother you, but can I just get my picture with you so that my friends will believe that you were here?” The Captain graciously greeted them all and happily obliged their requests. A woman walking by on the street outside the diner caught sight of him through the window and stopped dead in her tracks on the sidewalk and stared in at the Captain with eyes wide and mouth agape. An older woman who was sitting in the next booth came over and said, “Excuse me, the mommy in me wishes that you do not get heat stroke today.” To which the Captain relied, “I almost got it yesterday.” 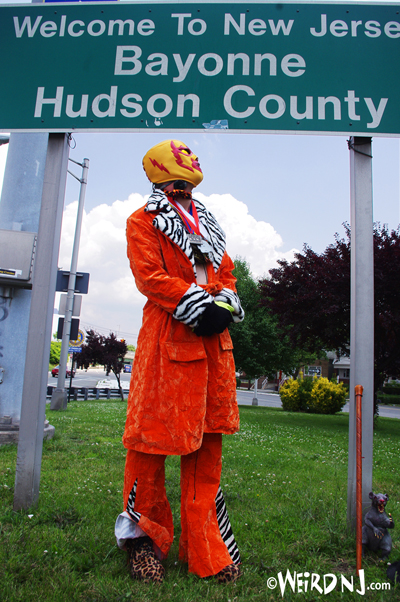 How long has this been going? We asked the Captain.

“I think it’s been going on about three years, but not to this extent. I started out doing it occasionally. I used to do it every now and then because this is how I run a half-marathon or a full marathon or a 5K––it’s in the entire outfit.

How did it all start, were you running prior to this?

“Yeah, I started running in 2001, that’s when I ran my first marathon when I turned thirty. That was the New York City Marathon. I’ve been doing it ever since, but not to this extent.”

Your identity is a secret, is there a reason for that?

“I think when you try to come off as a superhero people tend to appreciate it more if they don’t know who you are. They tend to pull for you more. Everybody wants to believe in superheroes. I don’t claim to be one, the only thing I am trying to do is just get people more involved with running and exercise in general. I think it’s just something that we all need to do more of. I’ve just been trying to get people to plant that seed in their head to really just get out there, to run or even walk, that would be fine. But you have to do something, you can’t just play video games and watch television, you could be using that time to exercise. So that’s really the message that I want to put out there, to take care of yourself. People take care of their cars better than they do themselves. And as you get older in life… me personally, I wouldn’t want to be in a wheelchair, not able to get around. I don’t want to be on medications. I’ll do this day in and day out just to push myself.” 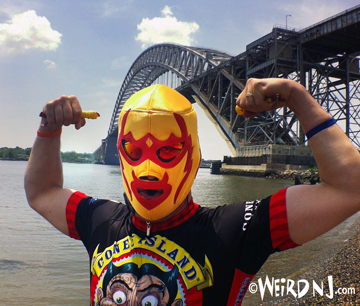 Is there some significance to choosing Mexican wrestling mask?

“I always found the masks to be cool. I had an incident once where I was running at night and I almost got hit by a car. This guy was just speeding and I almost literally went through the windshield. Iit was partly my fault for wearing dark clothing, but it was his fault for driving the way he was, but that wouldn’t have really mattered if I were dead. So it was after that that I started to look for ways to create something where people couldn’t possibly not see me. And this is really an outfit that people notice.”

Is it hard to get an uninterrupted run in when people are trying to get your picture all the time?

“No, I don’t mind it at all if they stop me. You dress up like this, you’ve got to expect people to take notice. I get a lot of people taking pictures and sometimes people will do some things that are a little on the provocative side. And I’m kind of amazed by it, and I’m kind of like a deer in the headlights. That’s really not what I’m trying to promote at all.

“The main thing with me is I enjoy making people laugh, I enjoy making them smile, and that’s a part of good health. As long as you’re doing all of that, it’s keeping all the bad stuff at bay: the violence, the anger, and the anxiety. I tell people that all the time, that if you go out for a run, you won’t have any of that. It will just dissipate.”

Have any curious people ever tried to follow you to see if they could figure out where Captain Bayonne’s lair is, and his true identity?

“Usually when I come out of my house I won’t put the mask on until I get across the street, and I had somebody come around the corner and seemed to have a camera out and ready for me. There is a picture out there, not completely showing my face, but part of my face.”

So there are arch-villains trying to out you?

“Exactly, yeah. They’re very curious. There are people that claim that I’m a number of different people in Bayonne, other runners. I’ve been accused of being at a Hoboken run, and other places that I just haven’t been.”

Has anybody else ever tried to copy your act and wear a mask while running?

“I haven’t seen it yet, but I wouldn’t have any issues with it. I’d be happy, because I do feel that I get some benefits from this. I tell people that you don’t need to get plastic surgery if you wear this, it keeps everything in place and you’re going to look much better. I’m 43-years old and people tell me that I look much younger.”

“I was born with physical disabilities. When I was a kid and went to the shoe store to get school shoes they measured my left foot and gave me a shoe size. But then they had to cram my other foot in there and that’s when they realized there was a major difference. My one foot is a size 12 and the other is a 9. It’s something I’ve had to deal with. My mom used to have to put kneepads on me because I would trip and fall down so much and they didn’t realize why. I had a lot of trips to the emergency room.”

What does the future hold for Captain Bayonne, where do you see yourself going from here? Will you continue to fight the good fight?

“I just want to continue to promote better health, and people making better choices in life about what they eat. And on top of that, I want to make people laugh. So, if the shorts work out and people get a good laugh out of it at my expense, I don’t have any issue with it. Laugh away, it’s not a problem. I take a lot of joy out of making people laugh.”

After we exited the diner, the Captain removed his dress finery, stripped down to his usual sleek spandex running attire, and hit the street. Then, crouching on the pavement in a classic runner’s starting position, he waited at the white line of a crosswalk. Then he motioned to a nearby motorist that he was challenging him to a race to the next traffic light when the signal changed from red to green. When it did, he was off like a shot! In seconds he was out of sight, disappeared down the busy city street.

So the next time you find yourself in Bayonne keep your eyes peeled. If you happen to see a brightly colored figure streak by you at seemingly super-human speed do not be alarmed. No, that was not Captain America nor the Flash, that was New Jersey’s own resident superhero Captain Bayonne, and he is on a crusade to make us all healthier and more physically active, one speedy step at a time.