Francois – A Man Out of Time 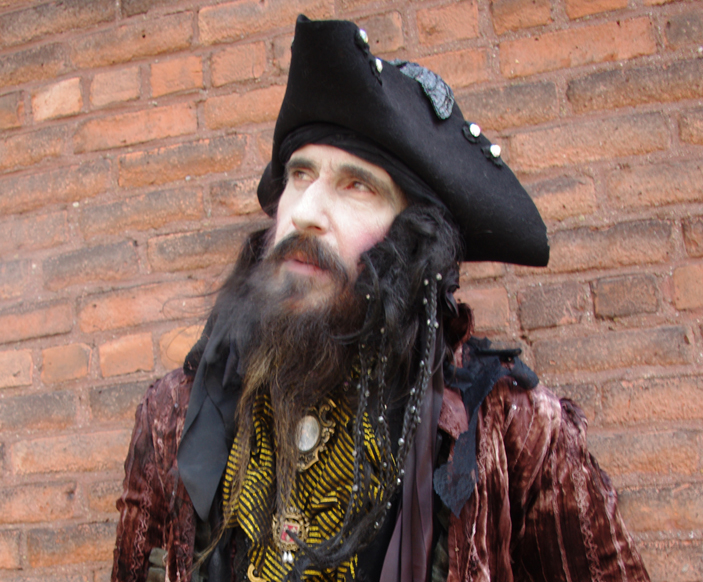 We are walking along Park Avenue in Rutherford talking with a 17th Century ghost. In the physical world of the 21st Century he goes simply by the name of “Francois” but his thoughts are not of this time, and his visions for the future are ominous. He dresses as a 17th Century gentleman. He is an artist. He doesn’t use a cell phone or computer, and he only travels by means of public transportation, which most times turns the heads of commuters when he walks onto the bus. He works at the Fun Ghoul Costume Shop, a place he feels is a safe haven for the time he spends on this earth. As we’re walking down the avenue people yell out of their cars “ARRRG!” and other pirate related jargon. 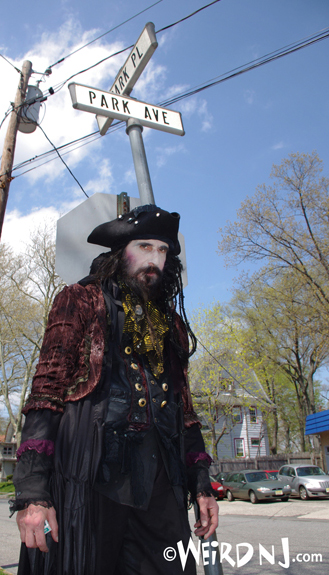 “Everybody’s reaction is different,” Francois tells us. “I hear that all the time, and they all seem so proud of themselves for yelling it out. The other night I was getting back to Paterson, where I live. There were these two Mexican guys who were obviously drunk walking behind me and they were yelling ‘Satanico, Satanico!’ I had a long day and I go to open my door. We have red motion that detectors come on. They must have thought it was very hellish because they took off! Some people yell out ‘666,’ but mostly it’s ‘Arg!’ Some people say ‘Where’s your parrot?’ Or ‘Where’s your treasure chest?’ Small children ask the most intelligent questions when they see me because they don’t do it to be funny.”

Our questions were the basic ones, starting with, “Why do you dress the way you do?”

“Why I started to dress this way was is because I started to hear voices speaking in French. I don’t speak French but I started to write things down (phonetically) and I was getting some real names. These people were trying to tell me how they died in the French Revolution, and these people were aristocrats, loyal to the family. Some voices where that of children. They were giving me their names and told me I had to go to the church and have masses said for them. I brought the names and the church recognized them and knowingly, said ‘OK.’ After the mass it felt like a big weight was lifted from me. I was doing 18th Century theater at the time and the whole thing just funneled and I was really feeling some kind of connection. More to them than to people out here. Then I started to understand the whole ‘life and death’ thing, and I figured if you could get killed just by the way you’re dressed, then I shouldn’t be afraid to walk around like this. This is why I dress this way. If people want to kill me because of it, then let them do it. They might be doing me a favor for all I know!”

Francois is also a medium, an intermediary between the physical world and the spiritual world. His predictions for our future are far from optimistic.

“I feel more in tune with the ones that people would call ‘the dead.’ I have a lot of friends, but most of them are ghosts. There are strange things that happen to me. After 9/11 I didn’t go into the city for months because I was nervous something was going to happen. Once I got through the Port Authority I thought ‘Well, this isn’t so bad,’ then I saw this energy funnel coming up the street, like a swarm of bees, and it hit me right in the chest. I was like ‘No, no, no, please stop.’ I was leaning up against the wall. The energy was trying to warn us. The energy was trying to warn me that things were not as they were being said. These people from 9/11 who were murdered were trying to tell us who really murdered them. There are conspiracies that have been going on for years. There has been a continuum that goes back to the French and Russian Revolutions and the same group of people have been involved. I don’t know how they are still alive, but these spirits have been warning me that something bad is going to happen soon. I don’t want to be a black cloud over everyone’s parade or anything. I don’t have specific dates or anything like that, but it’s going to happen. Now they are bragging that they want to get rid of books with this thing called ‘Kindle.’ What do you do with kindling? You start a fire. Ray Bradbury was a prophet with books like Fahrenheit 451. 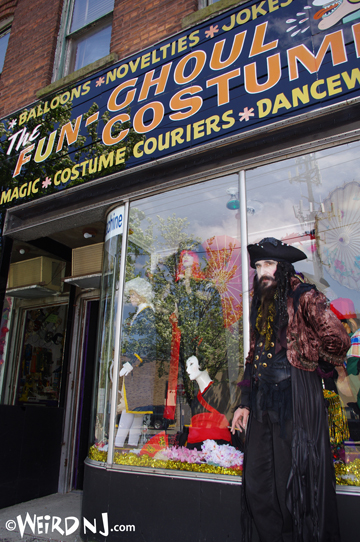 “These signs are all there, they are not hidden, they are all connected like a melody. Everything is so wrong, yet it scares me how complacent people have become. I don’t want to get Biblical, but even something like the ‘mark of the beast.’ You won’t be able to buy or sell anything without this ‘thing.’ Look at this thing called the Internet and what it’s become. This technology has never existed before, but now we have to have it. Anything that has real character, individuality or personal expression is becoming this big faceless digital blob. People don’t realize what’s being done to them. It’s the opposite of being born and being a human being. If we’re not here to be individuals, then there’s no purpose for us to be here. Who is setting this world up to where we are not needed? If I’m gonna go down, I’m gonna go down as an aristocrat!”

But being a French aristocrat in the 21st Century does have its drawbacks, even to others who dress the part, yet don’t live it.

“I used to go to the Renaissance fair and dress as an aristocrat. Then I got banned. They told me I wasn’t allowed to go there anymore unless I became an employee—and I had to dress and talk like the English. I mean the French had a Renaissance as well as the Italians and the Germans. This guy who was dressed as Medieval knight comes up to me and says “Wrong time period, you know!” And I said, ‘It’s always the wrong time period.’ They told me I couldn’t come back and they wouldn’t even accept my admission fee. I was upstaging their employees. I was going there dressed in white with rhinestones and pearls and gold, so I guess they didn’t like that.”

We stop at the Dairy Queen for some French vanilla ice cream then over to the corner gas station to speak with some fellows mulling around the fuel tanks. The temperature is extremely muggy. 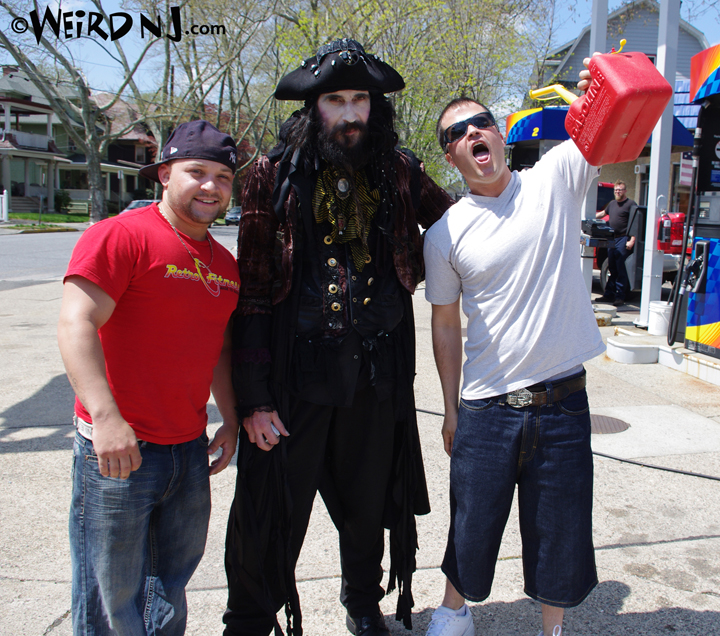 “You gotta be hot as hell in that thing,” said one of the gas station guys. “Well, I’m hot, but it always feels like hell,” said Francois. “These are my street clothes. I have a walk-in closet of clothes. I don’t like the summers too much because it’s very limiting in what I can wear. Summer is for silks, lace, transparent stuff. I never said I was here to be comfortable. I feel ghostly most of the time. The makeup makes it look like rotting skin.”

More cars ride by and honk their horns. We cross over the street to get a tour of The Fun Ghoul Costume Shop, which carries everything from simple Halloween masks to full theatrical costumes and props.

“I spend a lot of time here. It feels like a safe zone. Sometimes the walk to work is a gauntlet. Last week I was walking home and I guess this group of teenagers ride by in their car and yell, ‘Faggot whore. Why are you dressed like that?’ The next car rides by and they yell out, ‘Jew!’ Some people throw things at me, bottles, stuff like that. People will ask me if I dress this way for work. I say I dress this way every day, but not for work. I don’t know what people expect. Who are you supposed to be to make everyone else happy? No matter where I go people say, ‘Why are you here?’ But in the way that it counts, I feel connected to history. 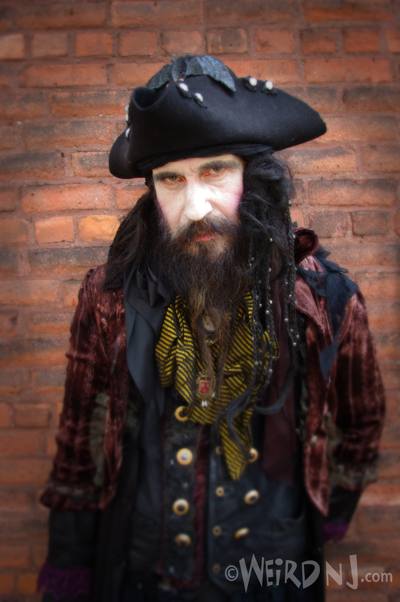 “Some people remember previous lives. I don’t know why everybody doesn’t, but for me, I’m obviously remembering things from my past, because it’s too vivid. When I see clothing or music from a certain time period I feel at peace. This world to me, well, I have to live in it but it’s jarring. I feel like I’m supposed to be a sign or reminder of the way things once were.”

We asked Francois if it bothers him that he feels out of sync with everything and everyone around him.

“It’s not anybody’s fault, but my own for being in this situation. It’s sad, but life is sad. I don’t envy anyone. Maybe sadness is the price you have to pay for knowing certain things. Maybe it was necessary.”