A-Bombs Away Off A.C. 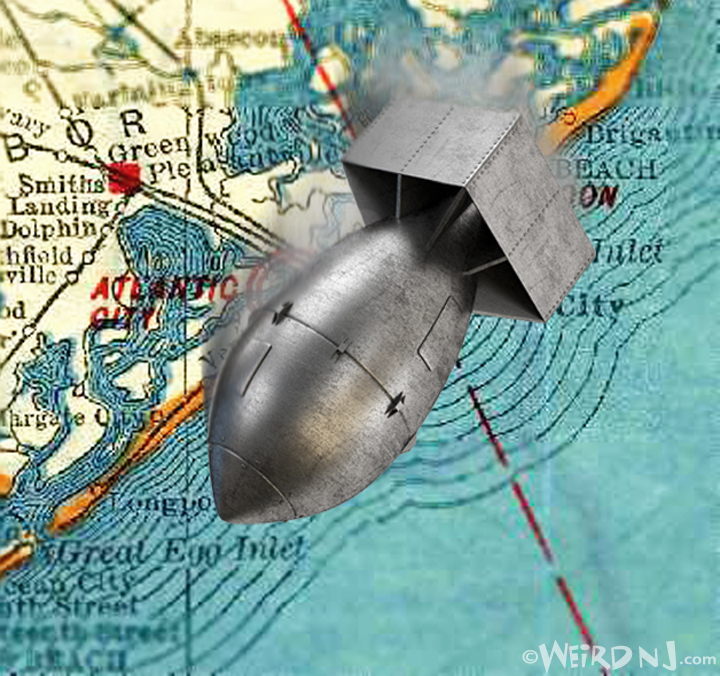 The 1950s were an era of unbridled nuclear proliferation. Fears of a potential nuclear war between the United States and the Soviet Union were rampant. Basement and backyard bomb shelters were in vogue. Air raid drills became as commonplace as fire drills in the schools. Within this tense atmosphere of nuclear confrontation, the United States and Soviet Union each strove to outdo the other side by producing and deploying larger numbers of increasingly more powerful nuclear weapons for a variety of military purposes.

With an ever-increasing number of nuclear weapons in circulation around the globe, accidents were bound to happen. Within the United States, accidents of this type were referred to as “broken arrow” incidents.

An incident of this type involving the loss of two atomic bombs occurred off the coast of New Jersey on July 28, 1957. On that day, an Air Force C-124 Globemaster transport aircraft took off from a base in Delaware on a routine flight to Europe. Its cargo consisted of three nuclear bombs plus one nuclear core. The flight would be anything but routine. The worldwide transportation of nuclear bombs by the Air Force’s Strategic Air Command (SAC) was a major activity during the Fifties. At that time, SAC operated four Strategic Support Squadrons dedicated to the nuclear transportation role.

The squadrons carried bombs, bomb components and other essential items required by SAC’s growing worldwide bomber fleet deployed at bases located across the United States, Europe, North Africa and Asia. These squadrons were equipped with the Douglas C-124 “Globemaster II” a plane which airmen nicknamed “Old Shaky”. The Globemaster was at one time the world’s largest military transport aircraft. Its double deck fuselage measured roughly 130 feet in length. It had a wingspan of nearly 175 feet, and weighed 175,000 pounds. Powered by four 3,500 horsepower Pratt & Whitney piston engines, the gigantic aircraft could cover a distance of 2,300 miles at a leisurely cruising speed of 246 miles per hour.

On that warm July day, the bomb-laden C-124 departed from Delaware’s Dover Air Force Base bound for Europe on the first leg of its ill-fated transoceanic flight. Its precise route

and destination remain unknown. Designed to carry large and heavy payloads, and not for speed, the C-124’s flight over the Atlantic Ocean could have required ten or twelve hours to complete. This trip, however, was to be different. Exactly what went wrong aboard the huge transport remains unknown. What is known is that within a relatively short time following its departure from Delaware, the C-124 was in serious trouble. The cause might have been an in-flight fire, a problem with the fuel supply or some other serious mechanical mishap.

Regardless of the cause, the immediate and devastating result was that two of the aircraft’s four engines had to be shut down. Only the two remaining Pratt & Whitney engines advanced to their maximum power settings, preventing the huge plane from rapidly losing height and crashing into the sea. Nevertheless, the crew of the aircraft could not maintain a level altitude. The two remaining engines simply could not support the massive weight of the aircraft and its cargo and the big C-124 began descending toward the ocean below.

Under the best of circumstances, the loss of two engines would have been considered a major in-flight emergency. For an aircraft heavily laden with a full load of fuel and a cargo of nuclear bombs, it was a potential disaster. Although there was never any danger of an accidental nuclear detonation, the aircraft, its flight crew and its highly classified cargo were now all at risk. 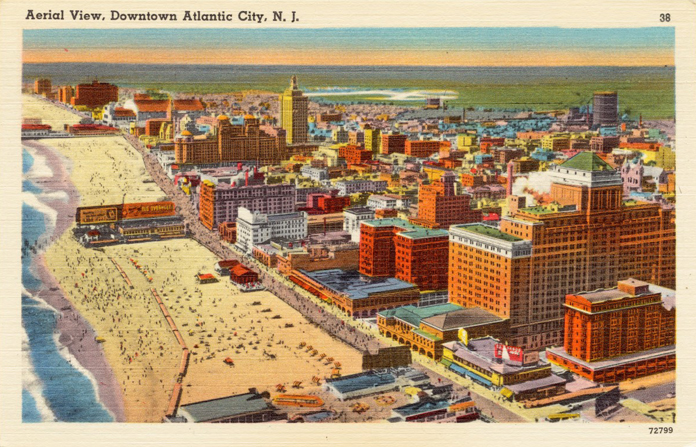 The only solution was to land the aircraft as quickly as possible. At this point in the flight, the coast of New Jersey was the closest landfall. The nearest suitable airfield was the Navy’s Atlantic City Naval Air Station. A secure military base equipped with long runways capable of handling jet fighters, the Atlantic City base offered hope to the crew of the big transport and a direct course to the Navy’s base was quickly plotted. Unfortunately, the aircraft’s rate of descent was too rapid to enable it to reach the shore. As the C-124 droned onward toward the New Jersey coast with its remaining engines pushed to their maximum limits, the aircraft continued to lose altitude.

The idea of “ditching” the aircraft – making an emergency crash landing in the ocean––was not well regarded. It was far too likely that the giant transport would be torn to pieces by the impact. The flight crew might not have survived a ditching and the classified cargo would have almost certainly been lost when the aircraft (or what was left of it) filled with water and sank to the bottom. The flight crew’s only hope lay in reaching the Atlantic City Naval Air Station. Yet this possibility appeared more and more uncertain as the aircraft continued to lose height, dropping inexorably toward the ocean below.

One way to reduce or halt the aircraft’s descent was to lighten it. Excess fuel, no longer needed for a long transoceanic flight, was probably dumped. Nonessential cargo may have been pitched out of the aircraft. These measures were inadequate and the rapidly unfolding midair crisis now reached a more urgent state. The weight of the aircraft had to be reduced, immediately, to prevent it from crashing into the sea. Only one drastic solution remained. The aircraft’s cargo would have to be jettisoned. Its nuclear bombs would have to go. 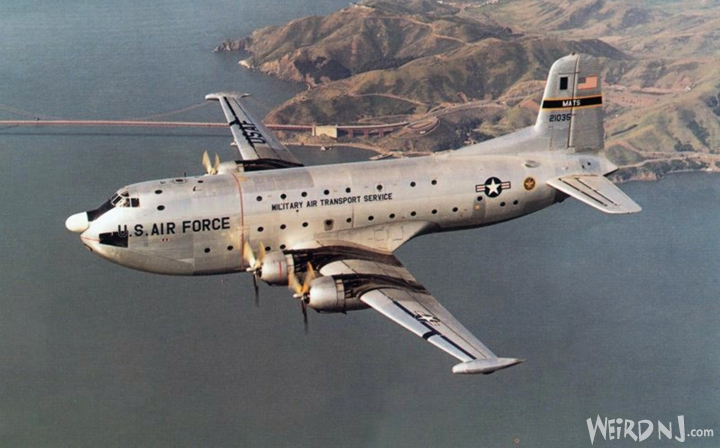 A key design feature of early nuclear bombs made this option somewhat more acceptable. Unlike more modern nuclear bombs, the first generation of atomic bombs featured a removable nuclear “core”. This core contained the bomb’s nuclear components including, typically, uranium and plutonium. The removable core technique ensured that such weapons remained “one point safe” and incapable of an accidental nuclear detonation. Under normal operating conditions aboard SAC’s bombers, the cores remained separated from the bombs. They would only be inserted, during flight, prior to dropping a weapon in wartime. Until the core was inserted, a weapon of this type was unarmed and safe. It was essentially just an empty bomb casing.

The three atomic bombs carried aboard the stricken C-124 lacked their nuclear cores. In this condition, they posed no particular threat in the event that they had had to be jettisoned. However, each bomb did contain a substantial amount of high explosive material. This was needed to compress the nuclear core and thereby initiate the nuclear reaction. It was uncertain whether these high explosive components might detonate when the bombs hit the water. The first bomb was pushed overboard at an altitude of only 2,500 feet above the sea. The bomb fell into the gray-green waters of the Atlantic Ocean roughly 100 miles from Atlantic City. There was no visible explosion as the bomb hit the water and it quickly vanished from sight.

The second bomb was jettisoned in the same manner. Again, there was no observable detonation of the high explosive elements. The combined weight of the two jettisoned bombs probably amounted to roughly three tons. Having shed some 6,000 pounds of excess weight, the C-124 was now able to maintain its altitude as it labored toward the New Jersey coast and safety. The third remaining bomb and the one nuclear core remained on board. Despite the loss of two engines and the severe handling difficulties this must have created, the crew managed to land the huge aircraft at the Atlantic City Naval Air Station without incident. Their heroic effort saved both the big aircraft and a portion of its atomic cargo during this harrowing incident.

Although the C-124 landed safely, the fate of the two lost nuclear bombs remains shrouded in mystery. Although the missing bombs lacked their nuclear cores, they were still regarded as highly classified devices. Soon after the incident, efforts to recover the bombs were made. Published reports suggested that these efforts were unsuccessful. What was the ultimate fate of the two lost atomic bombs?   Did they simply disintegrate when they slammed into the ocean? Were fragments of one or both bombs eventually located and recovered? Or, do they still lie somewhere on the ocean floor, silent and rusting artifacts of the Cold War?

We may never know.