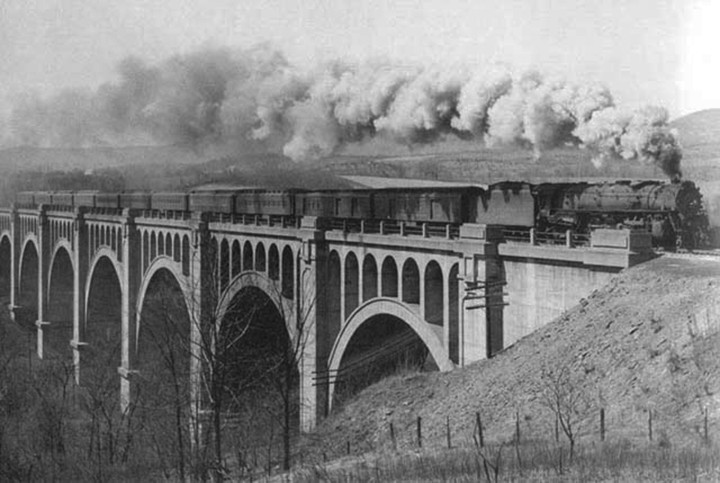 Of all the abandoned places that Weird NJ has explored over the years none match the awe inspiring architectural magnificence of the Paulinskill Viaduct. The Viaduct, or Hainesburg Trestle, is a long abandoned railroad bridge over the Paulinskill River near Blairstown. The most elevating feature of the Viaduct is that on top of the arches, beneath the rail bed, are a series of step ladders. This allows the explorer to actually travel through the inside of the structure. Each of the towers between the arches are hollow, with cavernous graffiti scrawled rooms inside. Manholes located along the railbed provide access to the top of the bridge from within. 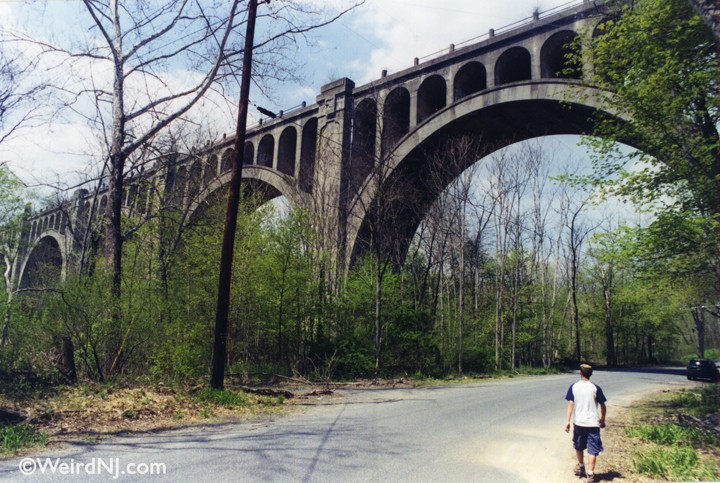 The railbed on top provides a breathtaking view of the valley for miles around. The height can be dizzying though, looking down at the tops of tall trees, and several of the guardrails are not longer in place to separate the adventurer from the abyss.

When first constructed in 1908, the Paulinskill Viaduct was considered to be one of the “wonders of the world.” For a brief period of time the reinforced concrete arched bridge was the largest structure of its kind in the entire world (until a more massive one was built in Pennsylvania). Built by the Delaware, Lackawanna, & Western Railroad, the seven arch span is an awesome 1,100 feet long, and towers 115 feet above the Paulinskill River. The train line went out of service in 1979, the railroad tracks were torn up in 1985 and the Viaduct was abandoned. Since then it has remained a true hidden treasure.

Today the viaduct is owned by the New Jersey Department of Transportation, which has to restore freight and passenger rail service between New York and Scranton, PA over the trestle. Though trespassing and even bungee jumping have long been popular at the abandoned site, both are now illegal, not to mention life-threatening activities.

Located just outside of Blairstown there is a bridge back in the woods. As you go down the road you don’t see it, then all of a sudden there’s this massive bridge towering above you out of nowhere. If you park your car on the side of the road and walk up a steep hill you can climb into the bridge. There are tunnels within it. There are a bunch of Satanic symbols all over it. Some people even say on certain nights there are satanic rituals held in the rooms inside the bridge. –Kristen

A man is supposed to haunt the trestle. He was buried alive in the cement when it was built. The spot is marked in one of the arches. As a kid, I used to go there a lot. I don’t remember if we found the spot or not but the guy is supposed to walk the tracks on top of the trestle. –Marcella Walgren 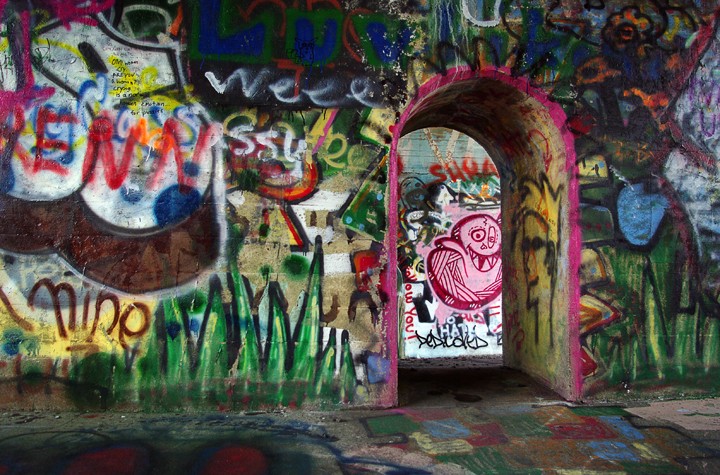 Bungee Jumping from the Paulinskill Viaduct

One time we were having a party under the second trestle, right next to the river. People were bungee jumping from the top of the trestle. They were coming down right over the river. After thirty minutes of watching them, we heard a splash. A rope had broken. We leaped into the water and pulled the guy out. Fortunately, he was alive. The first words out of his mouth were, “Do I get a refund?” I recall The Star-Ledger  or Herald News stating that he sustained a couple broken ribs, a punctured lung, and a ruptured spleen. –Tim 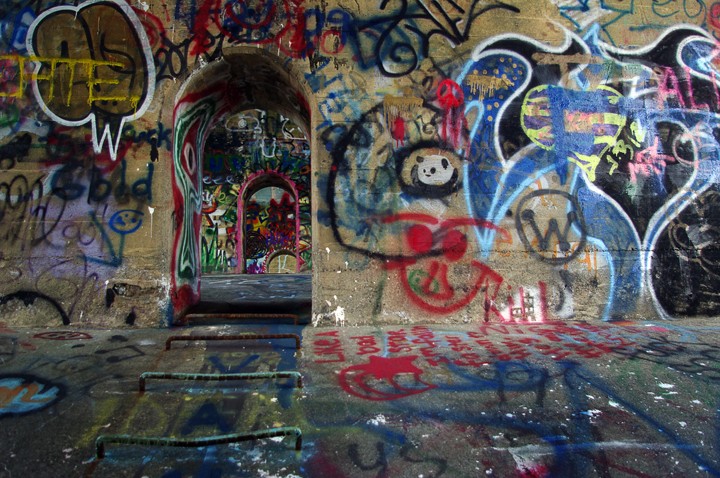 Deep Within the Belly of the Beast

I lived in the Blairstown area for 20 years and belonged to the Local Rescue Squad and have climbed through the maze of tunnels and caverns in the Paulinskill Viaduct. For some of my training we used the Viaduct for rope rescue training and just for fun, rappelled off the side of it. A few times when we were up there crawling through the passageways it felt odd. There was always this feeling that someone else was in there, watching us. One time I got so nervous I didn’t feel safe to be there anymore. We packed our equipment up and left. It has been five years since I’ve been there but I keep in touch with my old friends there and they do return to practice and they still feel a presence there sometimes. –Bryan

Dear Weird NJ: I wanted to let you know about the trespassing problem at the Paulinskill Viaduct in Blairstown. I was talking to a state trooper that is stationed around there and he said that they were arresting 15 to 20 people a month there. The people who live around the Viaduct as well as the town of Blairstown are annoyed about the drinking, graffiti and drug use that has happened there. I have been there a couple of times and I agree, the amount of graffiti and litter has definitely increased. The Viaduct is now clearly marked as being owned by the state of New Jersey and there are signs that say “the property is patrolled by the state police.” He also told me that most of these people say that they hear about it from Weird NJ. Now, I’m not saying its the your fault. I have seen dozens of disclaimers stating your views on trespassing and other criminal acts resulting from exploring abandoned places. If you were to put a little note or this e-mail in the “mail” section then I am sure the state police and people who live near the viaduct will appreciate it. They may even thank you for trying to warn people about going there. Thank you.  –Nicholas Dnistran