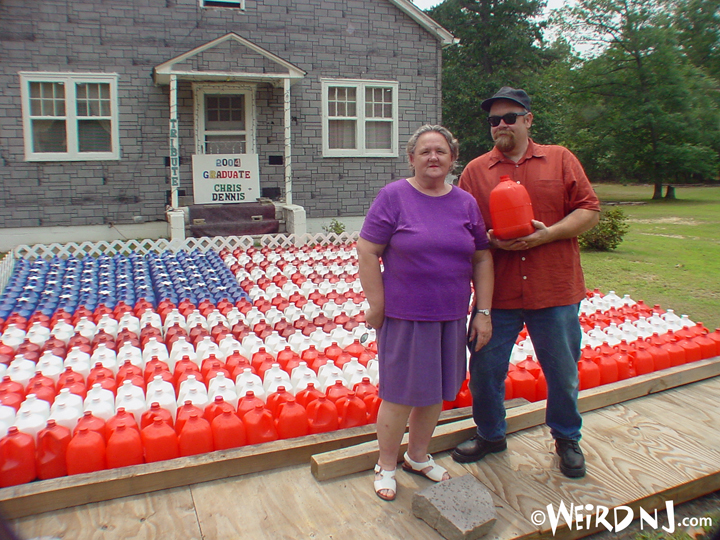 For many many years motorists traveling along Route 40 in Mizpah, between Buena Vista and Mays Landing, were treated to the sight of a work of art comprised of meticulously arranged multi-colored milk jugs. Using food and fabric dyes as her medium, one gallon plastic jugs as her palette, and her yard as a canvas, lawn artist Josephine Stapleton worked on the technicolor piece for more than thirty years.

The display changed seasonally to reflect the different holidays. Josephine paid homage to Easter, Halloween and Christmas, and even had a Disney themed Mickey and Minnie Mouse design which included a vibrant full spectrum rainbow (better watch out for those copyright lawyers Josephine!). 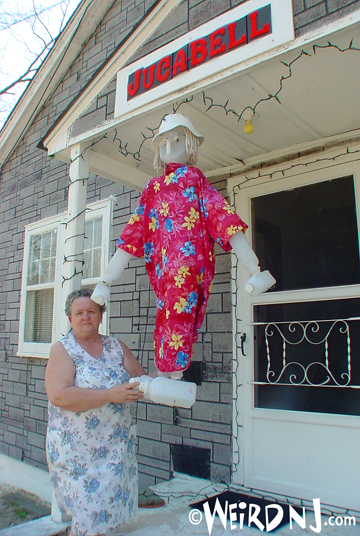 Josephine even crafted a life-sized self-portrait of sorts out of milk jugs that she named Jugabell. The figure wors a brightly colored housecoat, wig, hat and glasses, and hung beneath the eaves outside the front door of Josephine’s house.

Originally designed to keep her kids off the lawn, the piece attracted art lovers and lactose enthusiasts from all over the country. Visitors often donated their used jugs to support Josephine’s art. She hoped to one day build a map of the entire United States out of jugs, with each state being represented by a jug from its home state.

The longest running motif of this front yard gallery was the enormous red, white and blue American flag, which was part of Josephine’s permanent collection. We asked her why the flag had remained such a constant fixture in the lawn design, while her other creations were always in a state of flux.

“Those jugs are so old,” she told us, “that if I tried to move them they’d fall apart!”

UPDATE: Josephine moved away from her home on Route 40 several years ago and the milk jug display is now another part of Weird NJ history. In November of 2015 we received the following message from Josephine’s niece Lee Ann Farrell:

“Dear Weird NJ – My aunt, Josephine Stapleton, the Milk Jug Lady of Mays Landing NJ is still around, however she is now battling a serious illness. She wanted me to reach out to you and all of her followers that had stopped by at one point or another to see her milk jug creations. If anyone would like to send her well wishes, please do so here and I’ll make sure she sees it ASAP. Thank you for highlighting her work. It was a labor of love and she misses it dearly.”

Josephine passed away on December 4, 2015. You can read her obituary in the Press of Atlantic City HERE. 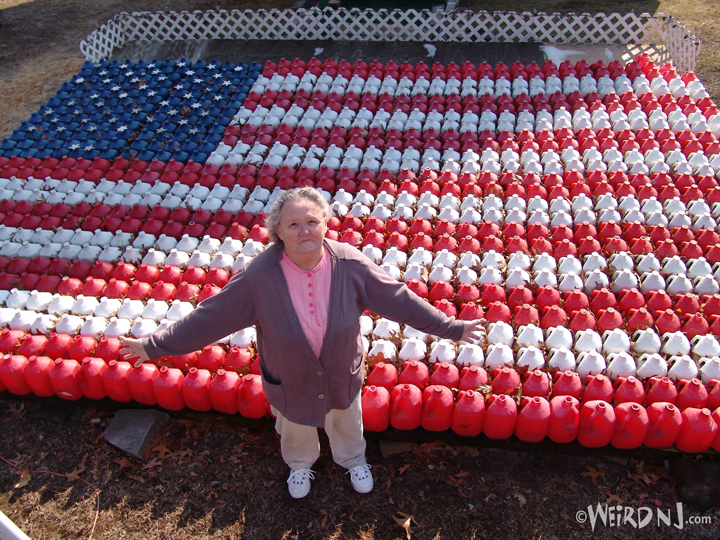