The “Chair House” of Route 9 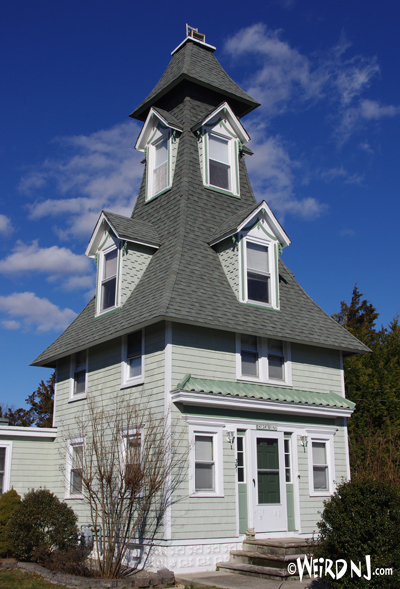 There’s an oddly shaped house located on Route 9 South in the little town of West Creek, part of Eagleswood Township, that has had passersby scratching their heads in wonder for the past 75 years or so. But it’s not the strange shape of the four-story home, with its steeple-like tower and pagoda-like roofing, it’s what’s on top that has always inspired people’s curiosity. For there, perched some 67-feet up in the air, atop a small flat square space at the very pinnacle of the house, sits…a lone chair. It’s not a fancy piece of furniture by any means, just a standard straight-backed wooden seat, one like you might find placed around any modest kitchen table setting.

It’s been up there for longer than anyone can really remember and has inspired a number of tall tales, which seek to explain its reason for being there. One local legend asserts that it was used during the Revolutionary War as a lookout post to spy advancing Redcoat troops. Another yarn says that it was a surveillance vantage point to monitor rumrunners on Little Egg Harbor Bay. Some locals know it as the “Punishment Chair,” because, they say, a former resident would use it to discipline their unruly children by banishing them to sit in the chair until they were ready to behave themselves. But the most common and widely told legend about the chair is without a doubt the one that tells of a ship captain’s wife, who would sit on the high perch keeping a silent vigil, watching for a sign of her husband’s return home from the sea. 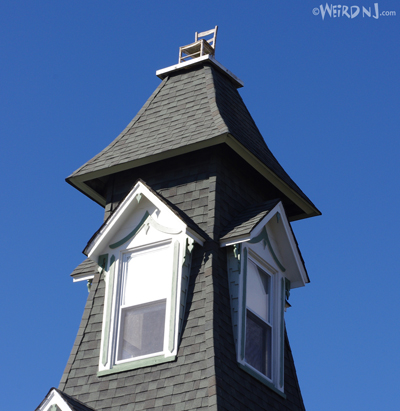 All of these fanciful fables make great stories, though of course, none of them are true. The truth about the “Chair House,” as it has come to be known, while perhaps not as romantic as the lore, is no less interesting or unusual. The home actually has a long and colorful history that has a pretty humble beginning. The structure didn’t start out where it stands today, or even as a house, well, not a house for people, anyway. It was build as hollow housing around a standpipe that pumped drinking water up from an artesian well in the town of Holgate, which is located across the bay from West Creek on Long Beach Island. It was built around the year 1887, but by the early twentieth century it had gone abandoned and was in disrepair. The building would remain in its dilapidated state for the next thirty year, until a Swedish immigrant named Albert Lindholm decided to purchase it and move it to its current location.

Lindholm dismantled the structure by cutting it into sections, then transported it via barge and an old wooden bridge, across the bay, reassembling it in West Creek some time around 1936. The Chair first appeared atop the house sometime around 1940, originally placed there by Lindholm as a joke. A flagpole painter by trade, he was by no means afraid of heights, and it’s said that he was always looking for new thrills and potential practical jokes to pull. Lindholm and his family lived in the house and ran a gas station in front of it on Main Street. The chair started attracting people’s attention right off the bat and Lindholm found that his little joke was great for business, as the gawkers were all potential customers. And he played it for all it was worth. Everyone who asked him why the chair was up there got a different far-fetched story as an answer.

Lindholm would occasionally change the color of the chair, painting it in the brightest hues he could find to garner it as much visibility as possible. At one point he even painted it with fluorescent paint so that it would glow in the dark and passersby could enjoy the sight of it at night as well as during the daytime. But he soon abandoned the idea after realizing that the image of a ghostly floating chair in the sky unsettled some folks and was becoming a traffic hazard.

The Chair was not the only odd feature that Lindholm added to the house, he also made the basement “bomb proof” to protect his family should America be attacked from abroad. When the Second World War broke out Lindholm, always the adventurer, joined the Merchant Marines. He died of a heart attack in 1947 at the age of 62. His wife continued to live in the house until 1959, then moved to Pennsylvania where she died that same year. 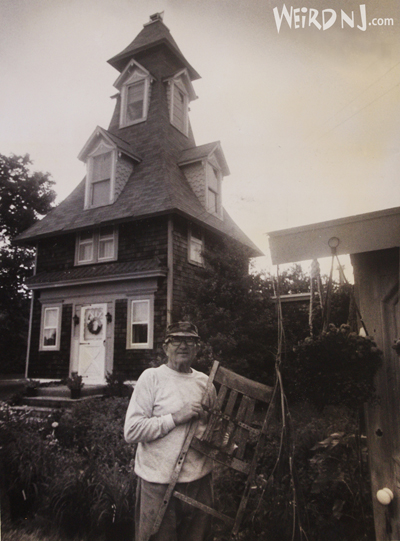 The next people to own the Chair House were Henry Tiska and his wife Anne, who purchased the home around 1970, and continued the chairing tradition. Tiska, a former Ship Bottom building inspector and tax assessor, specialized in restoring old homes, so the new residence seemed a perfect fit for him. The couple also grew vegetables in the backyard, which they sold from a little farm stand, which can still be seen today in from of the house. Mr. Tiska happily took on the mantel of keeper of the Chair and worked hard to maintain the seat and to replace it with a new chair whenever it became too deteriorated from exposure to the elements. To do this he devised an intricate and perilous system of ladders that ascended the outside of the steeple, which were anchored in place with ropes. Tiska would climb to the pinnacle of the house using this precarious method until he was well into his 70s. In the 1982 he began dressing a life-size human dummy as Santa Claus and seating it in the chair during the Christmas season.

“It guess it is a little screwy to put a thing like that up there,” he once told a local newspaper. “But thank God you have people like us that will do it!”

“I think he’s a nut and so do the neighbors,” Anne said in the same 1982 interview. “But when he makes his mind up to do something, he does it. I think he enjoys every minute of it.” 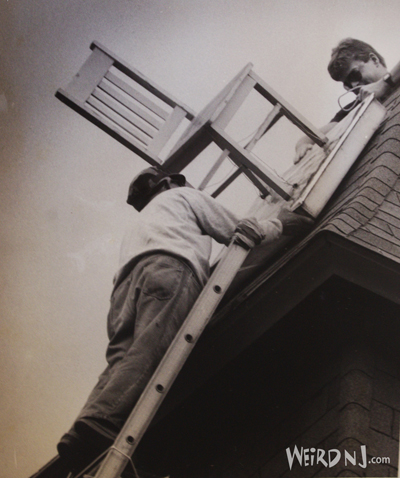 The next owners of the Chair House would be Phil and Susan Ward, who also vowed to keep West Creek’s weirdest tradition alive. The Wards purchase the house from the estate of Henry Tiska and have replaced the chair many times since then.

“They only last about two years,” Susan Ward told Weird NJ on a recent visit. She says she was once offered a more weather-proof chair by her brother-in-law, who was the mayor of the town, but she declined because she thought it would be too heavy and possibly hurt someone if it came flying off the roof. The Wards usually just grab old chairs off the street from local people’s trash heaps when they need a replacement. Few of the original owners would ever guess that their discarded furniture had reached such a lofty perch. Fortunately, the Wards happen to own the Greenwood Tree Service, so replacing the chairs is not nearly the death defying endeavor that it once was, thanks to the company’s cherry picker bucket truck.

These days the Wards’ son Nathan owns the Chair House. He used to live it with his wife before he bought it from his parents and converted it into office space for Greenwood Tree Service. Nathan told us that after the last chair blew off the roof in a storm a few years back, locals became quite upset at the sight of the chairless Chair House. The loss of their time honored town landmark didn’t sit well with them, and many actually started dropping off their own chairs in hopes that they could help replace it.

But fear not, for a new chair has now replaced the old one and is firmly affixed and bolted down. Nathan, who says one of his foremen installed the current chair, admits that he hasn’t been up there in a long time and has never actually sat in the chair himself. Naturally, we asked him if he would, so that we could snap a picture.

“Would I sit in it?” He asked himself, pausing briefly to ponder the possibility. “Heights don’t bother me, I would definitely sit in it. But first we have to put a new roof up there.”

You can bet Weird NJ will be there to witness it when Nathan says he’s ready take that seat! 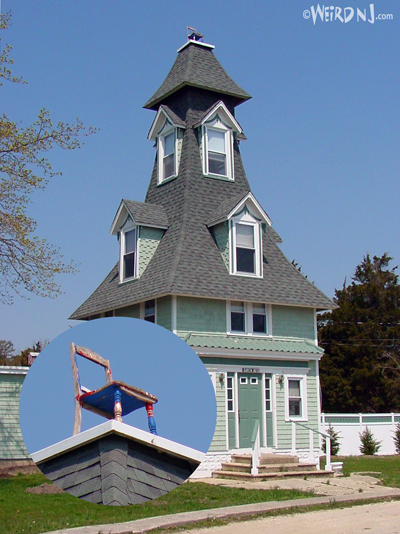