The Mystery of the Giant Floating Head 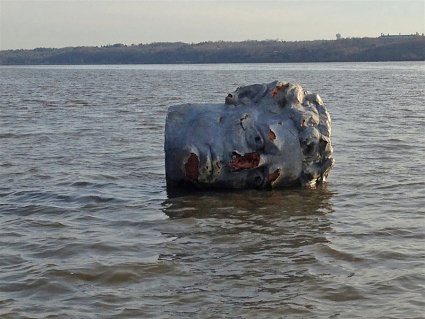 No one has yet claimed ownership of a giant head found last week floating in the Hudson River, but we may have scooped the major news outlets on its possible origin.

If you aren’t familiar with the story, a rowing crew from Marist College in Poughkeepsie, New York, found the 7-foot-tall, foam and fiberglass head damaged and adrift on April 22.

The team’s coach considered the enormous, Greek-style noodle a water hazard and enlisted 10 students to haul it to shore. It’s since become a school attraction.

Oddly, no one has seemed interested in retrieving the head.

However, Weird NJ was quick to identify it from issue 12 of the magazine, published in 1999, in which a reader-submitted article placed the head in Bergen County, New Jersey: 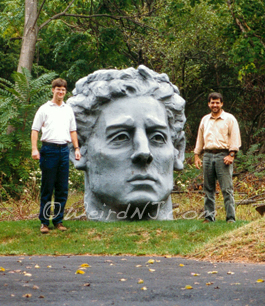 After learning about a giant head in someone’s backyard, we decided that an extended lunchtime investigation trip was warranted. The head turned out to be everything promised. The head sits in the backyard of a house in Bergen County, which shows telltale signs of being a truly weird place. In addition to the head, there were small Tiki idols on tree stumps, and a large painted fish hanging on the side of the house. As we stopped to take a couple of photos, the owner of the head came out to his car. We decided to ask him about his big head and whether we could pose next to it. He granted permission for our photo shoot and explained that the head came from Saks Fifth Ave in New York. The question we didn’t ask; why would you want a giant head sticking out of the ground in your backyard? 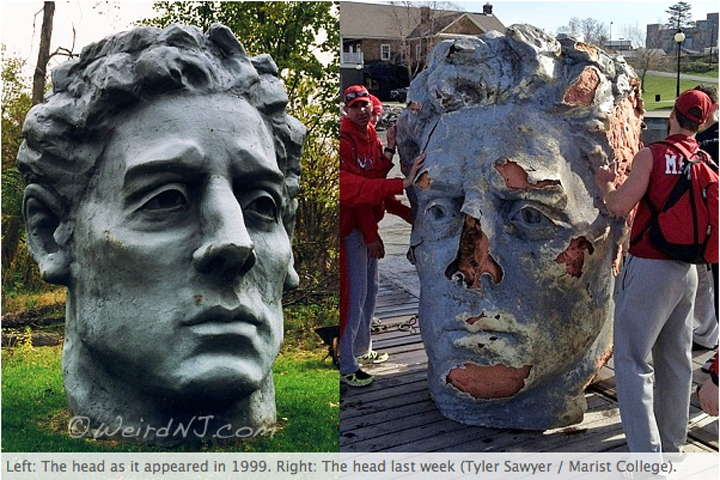 There’s been no word on how the head ended up some 50 miles away, and we’re still unsure of the previous owner’s name. If the Weird New Jersey team and I discover anymore information, we’ll be sure to let you know!

Thanks to Wesley Treat’s Roadside Resort.