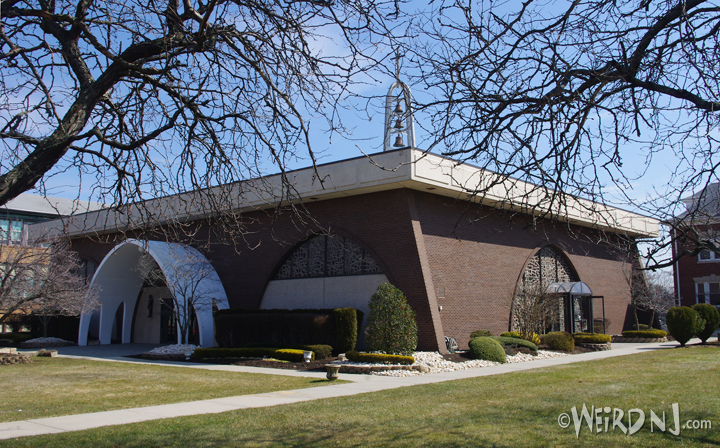 For several years now we’ve been hearing stories from the residents of Keyport of a strange and mysterious image that appears at night on the façade of a church located in that town. The phenomenon, known in local lore as “The Image of Satan Cast,” is said to resemble a devilish face, which reveals itself on certain nights when an unknown light source casts a shadow from a statue mounted on the church’s exterior. The shadowy specter is said to be well-known amongst the local teenage population, who have been known to congregate beneath the unholy visage.

To look at St. Joseph’s Catholic Church on Maple Place in Keyport during the day nobody would have a clue that something strange was taking place there after the sun goes down. Located in a semi-suburban setting near the Raritan Bay with manicured green lawns and blossoming cherry trees in the springtime, the house of worship seems anything but “weird”. 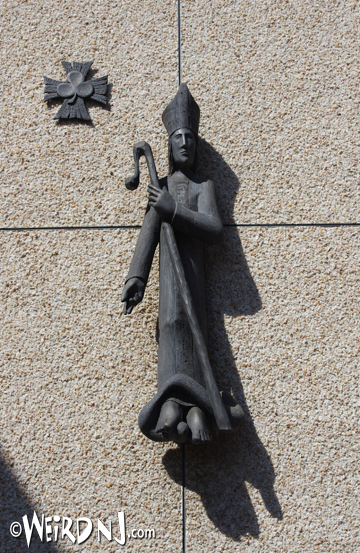 Statue of St. Patrick by day.

Although the church is named for Saint Joseph, the earthly “stepfather” of Jesus, the statue that casts the shadow in question is a likeness of Saint Patrick, who is credited as having brought Christianity to Ireland in the 5th century AD. The figure, which is mounted about nine feet above the ground on the back of the building, holds a staff and has a serpent coiled at its feet. (Part of St. Patrick’s mythology is the he drove the serpents from Ireland, though snakes were never actually indigenous to the island.) There’s a Celtic cross and shamrock decoration affixed to the wall above the saint’s piously high pointed hat. The scene all seems devout enough by in the daylight, but when the sun sets it is undeniable that the shadow cast by the figure bears an uncanny resemblance to the iconic image of Prince of Darkness himself: horned head, pointy nose, Van Dyke beard, sinister eye and an evil grin. 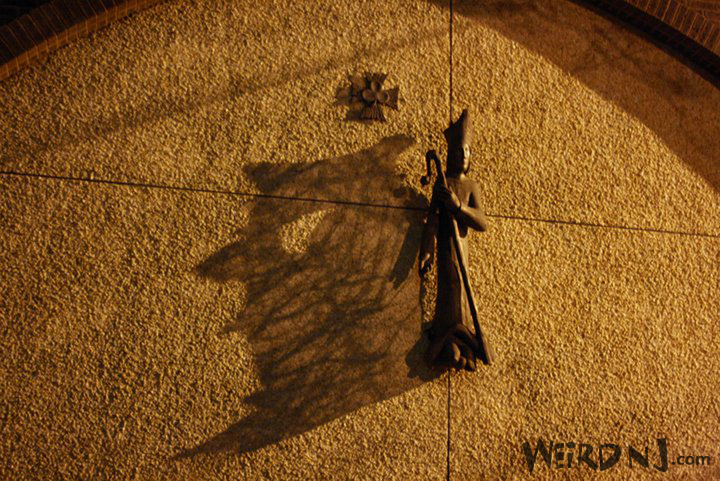 The Image of Satan Cast by night. Photo by Mary Gillard.

Weird NJ correspondent from the area, Laura Poll, told us she’s seen The Image of Satan Cast herself, saying, “It looks more like a witch’s profile. It was really tough getting a photo because it can only be seen at an angle, and it’s really faint.”

Mary Gillard, a WNJ reader, informed us that, “Thinking the shadow was due to the spotlighting, the light was moved to a completely different place by the church. Afterwards, that shadow disappeared.” But she went on to say that, “The shadow has now mysteriously re-appeared in the exact same spot, casting 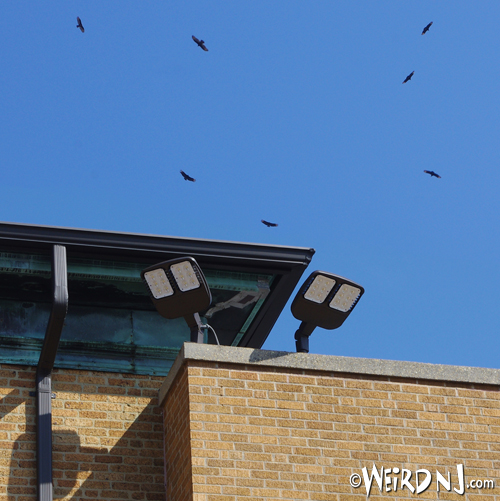 in the same direction even though the lighting is different. Could this be the work of outside forces?”

As with a Rorschach inkblot, any image, whether it be a stain, a cloud or a shadow, is open to interpretation and the imagination of the viewer. Perhaps the Image of Satan Cast is nothing more than an oddly shaped shadow thrown from the floodlights located on the adjacent church building, which coincidentally bears a resemblance to a hellish face. Either that, or Keyport is more than just the “Gateway to the Jersey Shore,” and is also a weird portal to the nether world.