Route 9, Through the Eyes of a Dinosaur 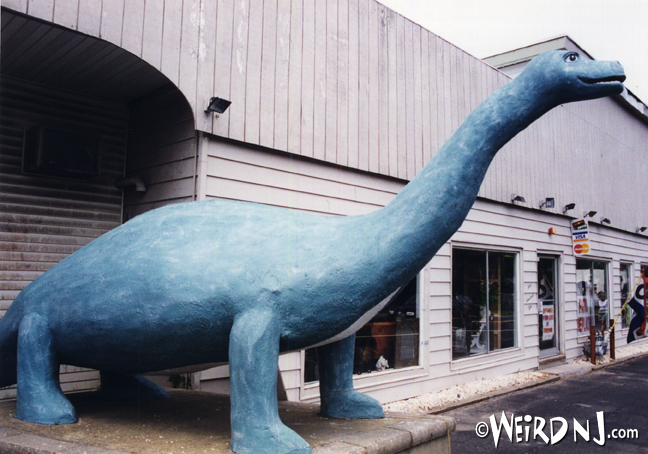 For almost 86 years now I have stood on Rt. 9 in Bayville watching the world go by (which for a dinosaur is no time at all), the scenery changing with each new decade, the population of cars growing from a handful here and there to thousands a day driving by my little place on the highway that was not so long ago little more than an oiled dirt road. As more people came and went, so did the fashions of their day and the designs of their motorcars, but always there was a smile and a wave from those who turned their heads as they passed, no matter how many times they had done it before.

As for myself, I came here about 1932 on the back of a flatbed truck brought here from a Howell Township Sinclair gas station to serve as a billboard for Will Farrow’s taxidermy shop. Mr. Farrow was a smart man, knowing that a dinosaur in the modern world would attract the attention of anyone who happened by, and although he himself passed into extinction in 1977, every business since has successfully used me for the same purpose, and always when directions are asked the people are told to just look for the dinosaur. If you went past it then you went too far.

I mentioned that I have seen many changes over the years, but I too have changed from time to time, my concrete and steel construction occasionally needing an upgrade as the weather beat itself upon my back. Mostly the repairs to my 20-foot-long body were done to my head due to it being knocked off every so often by a passing car or truck.

When I first arrived, Mr. Farrow set me facing south, my neck and back equipped with spikes. Not long after he did a little of his taxidermy work on me, elongating my neck and shaving off those spikes before setting me on a wooden platform and facing me straight on to the highway. 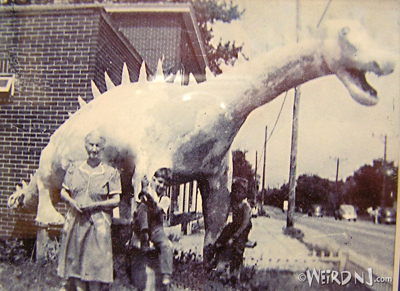 My next renovation came in 1961 when Fred Byzozwski, owner of the B&L Upholstery Company, which had moved into the building after Mr. Farrow built a new shop next door, gave me a new concrete base, replaced my spikes, and then added electric green light bulbs to my eyes and mouth. He also added an extra eighteen inches to my neck and moved me facing north as I still do today. The tip of my tail, which many thought was cut off when the new building was connected to the old, has always been missing, perhaps broken off when I moved here from Howell all those years ago. 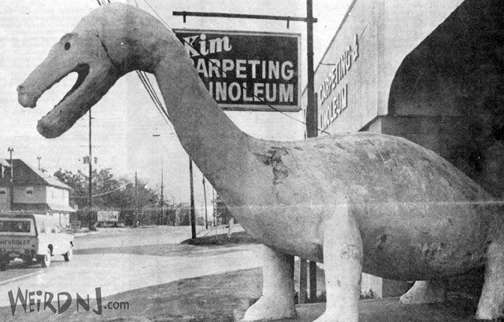 By 1968 my spikes were gone again and a coat of white paint made me look new once more, but by 1975 I was sporting a new noggin, the old one broken off somehow. Four years later I was named for the first time, dubbed “Ruggles” in a radio naming contest held by a store called, “Kim’s Carpet & Linoleum,” which had replaced the upholstery place. Up to this point in my life people just called me “The Dinosaur,” or sometimes “Dino,” for sort, and the new name seemed weird, but alas, I am an advertising device after all.

In 1980 one of those passing cars I mentioned slammed into me and knocked my face off! I couldn’t believe it. I was just standing there minding my own business and boom! Off came my face! Not one of my better days for sure, but to add insult to injury they replaced my entire head with the most hideous thing I’d ever seen. I looked like a sick cow that was baying at the moon, and it was the only time in my life that I couldn’t wait for something else to hit me! Shortly after they lowered my face, which felt better on the neck, but all I could see now was the white line on the highway. Boring!

My wish came true soon enough when in 1981 a man named Joe Bald crafted me a new cranium in his basement and very lovingly attached it to my weary neck after yet another vehicle ventured too far off the shoulder of the road.

By 1996 I was looking pretty ragged once more. Somewhere along the line my head had been knocked off and replaced again, this time with one that looked rather scary, but the worst part is that they painted me purple after that stuffed dinosaur had made the big time on that kids’ show! I was feeling pretty down about this incarnation and I didn’t think that things could get any worse until 1998 when I was struck again, only this time someone added insult to injury when they stole my head!

I don’t know if it was ever found, but that was just as well because the owners of the new store called, “Let’s Decorate,” paid a local sculptor named Robert W. Applegate to give me a very sleekly designed hat rack that didn’t weigh so heavy on my old spine, and he even gave me a smile and a new coat of light green paint.

I was finally feeling good about myself again, but it didn’t last long because less than a year later another truck hit me, although this time the steel reinforcement Mr. Applegate used in my neck kept my head in place. I was patched up and stayed safe for several years, although the only change was that you might happen to see birds nesting in my mouth. Not the best tasting thing, but even birds need a place to stay.

Life was good and things stayed pretty much the same until 2007, when a new store called “House of Paints,” decided to paint me powder blue and have some local children put their handprints all over my body in different colors. It was also at this time that I was renamed, “Virginia,” in honor of the owner’s grandmother.

It would be eight years before another wayward driver would come visit me, which brings us to 2015. I might have mentioned that people like me, and I have to say that I rather enjoy the attention, but once the paint store went out of business and the property was bought in a tax sale there was no one around to take care of me. 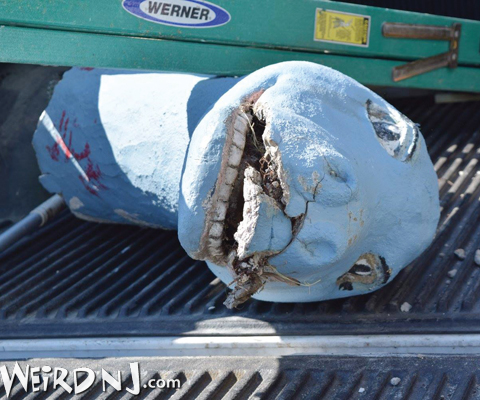 Don’t get me wrong. Over the years people had always inquired as to my health or showed their support, like the 6,000 folks who sent in postcards to name me “Ruggles,” but things were looking pretty desperate after this last head-removing incident until a group of the town’s citizens and the government got together and decided that I needed some medical attention and fast. 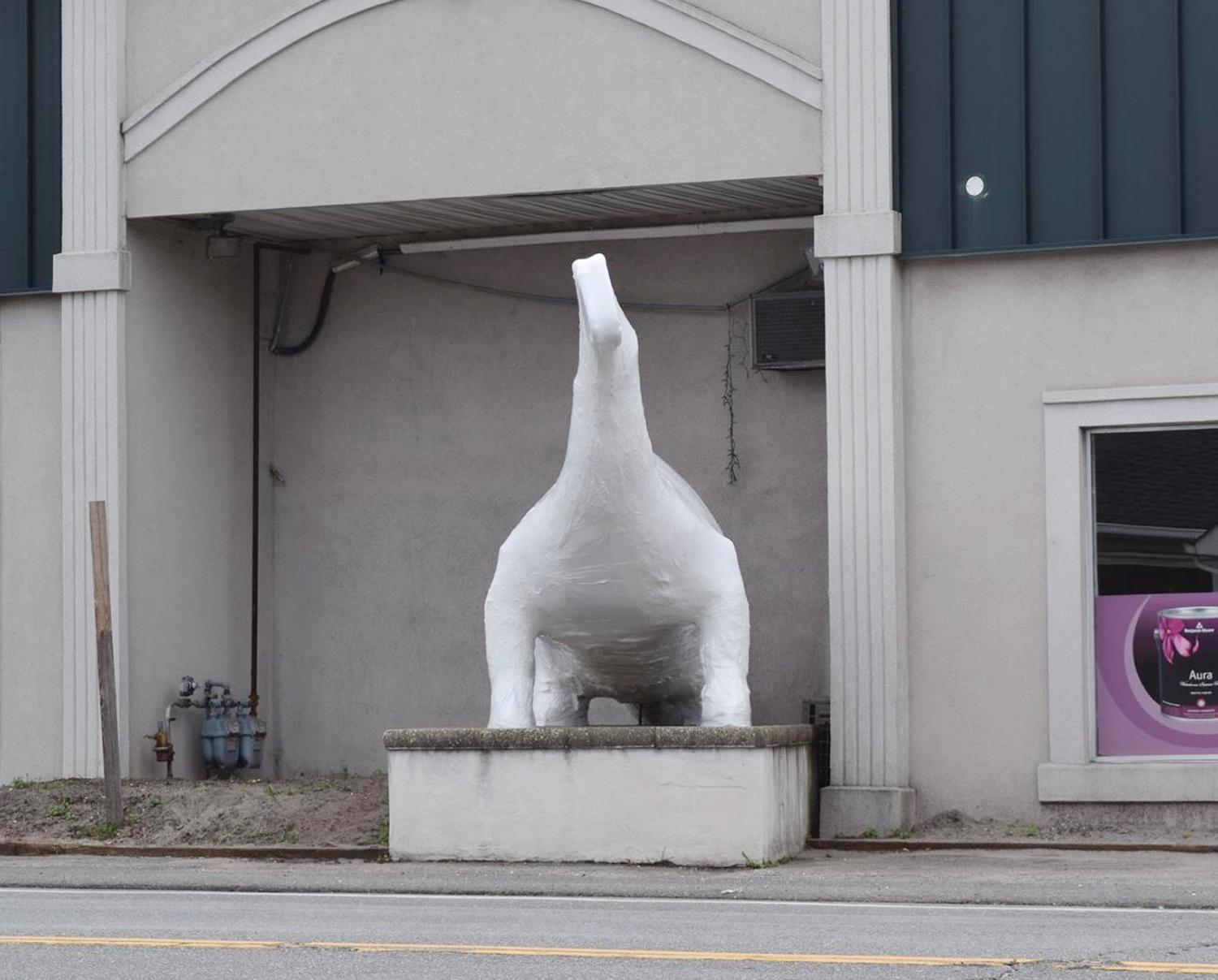 As I stand here still today I find myself wrapped in shrink wrap like a winterized boat. It’s not a bad look, although I do feel a little like Imhotep, but I know that this is the best way to protect me until the humans can restore me back to my original glory, which I hope will be done by the time you read this article.

I am The Dinosaur (no longer called Virginia or Ruggles), and I have been many things to many people over the years. To some I am just a landmark to be used for directions, but to most I am a fond memory to people who need me to always exist in their lives and in the lives of their children’s children. It’s a lot to live up to, but once I have my new look I think I’ll be up to the task and I will tell your future generations that you said, “Hi.”

Steven J. Baeli is a professional historian and the proprietor of the Ocean County Compendium of History, which can be found at www.ochistory.org. You can find out more information and see old photographs of the Bayville Binosaur on Facebook at Restore the Bayville Dinosaur.