Blood Stained Pew and the Ghosts of Tennent Church – Manalapan

One of my first experiences with history and New Jersey weirdness was in a book entitled “An Elementary History of NJ,” published in 1924. It was the usual textbook reference guide for intermediate grades throughout New Jersey. I found an interesting reference to Tennent Church in Manalapan, and the role it played in the American Revolution, most notably the Battle Of Monmouth:

As a young soldier sat on a grave and watched the battle, a cannon ball struck him in the leg and broke off the top of the tombstone. Friends carried the unfortunate soldier into the church and laid him in one of the pews. The bloodstains can still be seen today.

The cannonball sheared tombstone and the blood stained church pew.

After years of wanting to visit the church, Weird NJ recently went to see the famous blood stains that are still visible in the second-to-last row of pews, and were lucky enough to meet the caretaker and ask some questions about the legends we’ve heard regarding the 250 year history of Tennent Church and the ghost of a Revolutionary War soldier that is said to walk its graveyard.

The church was used as a hospital following the Battle of Monmouth in 1778. In the elementary book I carried with me, I noted that the soldier’s name was Tunis Coward, but the groundskeeper said that was not true, and pointed us toward the grave of the soldier that had been carried into the church. The name on the stone was Capt. Henry Fauntleroy. It was kind of hard to argue with the groundskeeper’s opinion that this was the man responsible for the bloody pew and not Mr. Coward, since the head stone goes on to say “Killed by a cannon ball at the Battle of Monmouth 28th June, 1778.” We usually give the history books the benefit of the doubt when it comes to discrepancies in local legends, but hey, this was literally written in stone! 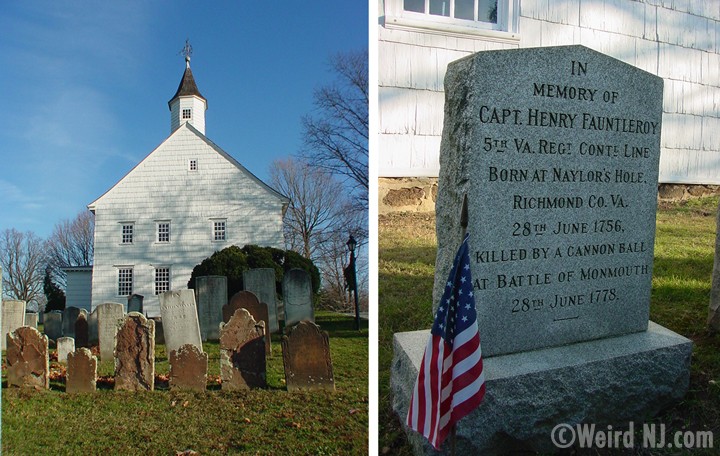 The Tennent Church and the grave of Capt. Henry Fauntleroy, killed by a cannonball.

Earlier, we had walked the grounds of the cemetery and found what we believed to be the exact tombstone on which Capt. Fauntleroy had been sitting on that fateful day. The top half of the red sandstone tablet had been sheered clean off. Our guide, the caretaker, confirmed our discovery when we asked him about the broken stone. Then we asked if he had ever heard any legends surrounding the church, specifically of the Revolutionary War soldiers’ ghosts that roam the grounds.

“I’ve never heard that or seen anything,” he replied. “Kids like to make up stories.”

We then asked him if he knew anything about someone named “Cookie”––another ghost that is said to roam the graveyard by night.

“Yes,” he said, with a kind of suspicious look on his face, “My grandfather used to date her.”

“They didn’t happen to go to the prom together, did they?”

“No, but there is a picture on her tombstone of her in her prom dress.  I think she died in a car accident, but I don’t think it was on her prom night.”

Sometimes all you need to start a legend is a picture on a stone in a graveyard. If the person is wearing a prom dress, well, that just stirs up the imagination even more. Whether Cookie wanders the graveyard calling out for her date, or Revolutionary soldiers retrace their bloody footsteps, no one really knows. Many historic sites associated with death or sorrow seem to have some element of ghostly apparitions and legends surrounding them though. At the Tennent Church, it is those amongst the living who roam the sacred grounds who tell the stories best. 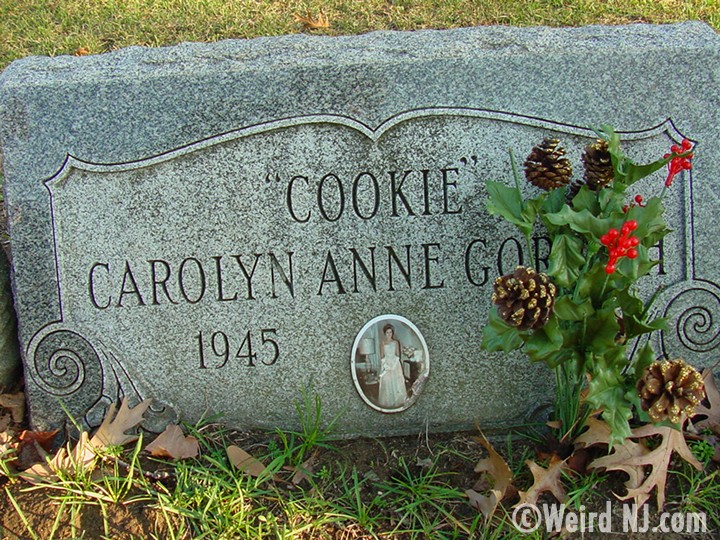 I’m a resident of Englishtown, a town which should have its own section for odd people in Weird NJ.  However, I am writing to you about a church on the outskirts of Englishtown, actually found in Manalapan, called the Tennent Church, which was involved with the Revolutionary War.  Soldiers from the Battle of Monmouth are buried on the grounds, and children’s gravestones are found around the church, possibly from a smallpox outbreak.

The legend that I’ve heard from everybody in town is that the church may be haunted.  Many say at midnight you can see ghosts of soldiers walking around the cemetery. But the odd thing about this church is in one of the last pews on the left side of the church, there is a blood stain on the seat. In order to see the blood stain, you have to lift up the cushion on the seat, but sure enough it’s there.

It’s told that at midnight, if inside the church or looking through a window, the ghost of a soldier sits in the pew and cries. I have been inside the church on a calm sunny day, when out of nowhere the doors have slammed shut and a gust of cool air swept through the building.

Also, in this same cemetery, there is a gravestone for a girl named Cookie. She has a picture of herself on the grave. The legend I’ve heard is she was killed when she was waiting for her prom date to pick her up on prom night. Around the end of May, or beginning of June, flowers always appear on her grave, and on the anniversary of her death she is said to be seen either roaming the graveyard, or waiting at the entrance calling her date’s name. –Christy Toth