A Stylish Ride to the Other Side

Located in the peaceful setting of the Rosedale Cemetery in Linden, stands a monument to one young man’s love of an automobile. The final resting place of Raymond Tse is an impressive enough looking mausoleum adorned by marble pillars, urns and relief sculptures of two oriental lions set into the facade. But what really puts this tomb in a luxury class by itself is the full size granite replica of a Mercedes Benz 240 Diesel that is parked right out back. The car, which is an exact scale model of the German four-door sedan, was chiseled from a single block of stone. There it sits, fully loaded and bearing all of the appropriate manufacturer’s insignias, eternally at the ready to whisk the dear departed away to the hereafter. It even has personalized license plates bearing the name Ray Tse. 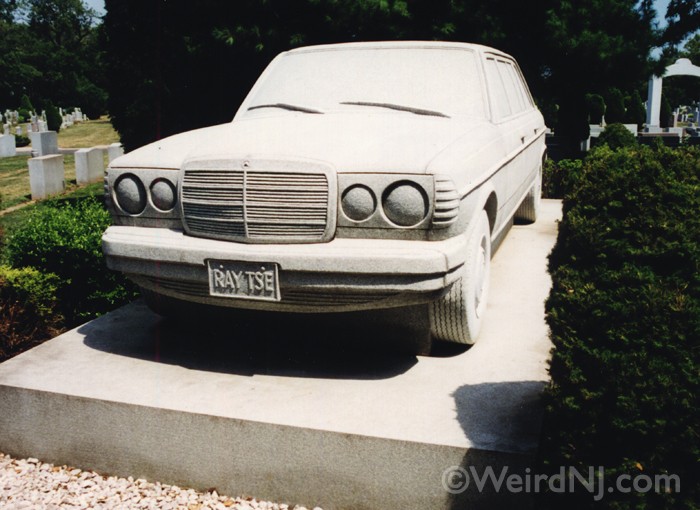 Legend has it that young Raymond had always dreamed of owning a Mercedes as a boy, but was killed in a tragic auto accident at age 15, just before receiving his driver’s license. Others say that Ray’s older brother David, a well-to-do Chinese-America businessman promised his younger brother a Mercedes upon yearning his driver’s license. This was never to be though, as Ray is said to have taken ill and died before reaching the legal driving age. Weird NJ spoke with Richard T. who was a tenant in one of the many NJ buildings owned by David Tse and was one of the mourners present at Raymond’s funeral. 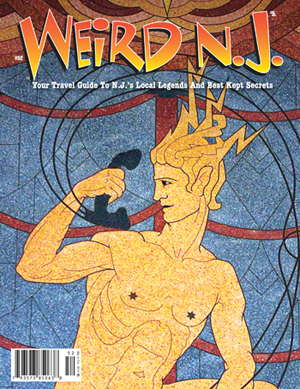 “David owned several luxury cars himself,” Richard told us, “and promised to buy Ray one for his seventeenth birthday. Ray lived in Hong Kong, but he visited David in America often. David was about twenty years older than Ray. When Ray died, his parents could not accept the loss and shipped the body over here for burial. They didn’t even attend the funeral. At the service we were all given play money and fake gold bars to throw into a can of fire so that Ray would have wealth in the afterlife. They also gave out real money, which would have been disrespectful to refuse. I was given $30 which I threw in a drawer and did not touch for five years.”

“Ray’s mausoleum and Mercedes take up forty cemetery plots and cost $500,000 back in the 1981. David is said to still visit the grave ever day. ”

The monument is a wonder of the modern stonecutter’s craft. The car’s grill, windshield wipers, treads in the tires, textured taillights and even the exhaust pipe and muffler are rendered in painstaking detail. The only thing missing are the two side-view mirrors, which most likely would have protruded too much and been broken off.

We asked Anthony Sgobba, who carved the Lightbulb Gravestone in Totowa, how he thought that this amazing sculpture was done.

“They took a big chunk of granite, probably three times the size they needed, and chiseled away.” He said, adding, “It’s quite a nice stone. They probably drove a Mercedes into their shop. It’s all done by sight and hand chisels. It probably took a year-and-a-half to cut that stone.”

That would mean that by the time this car rolled of the assembly line it was already a late model, just like its owner. 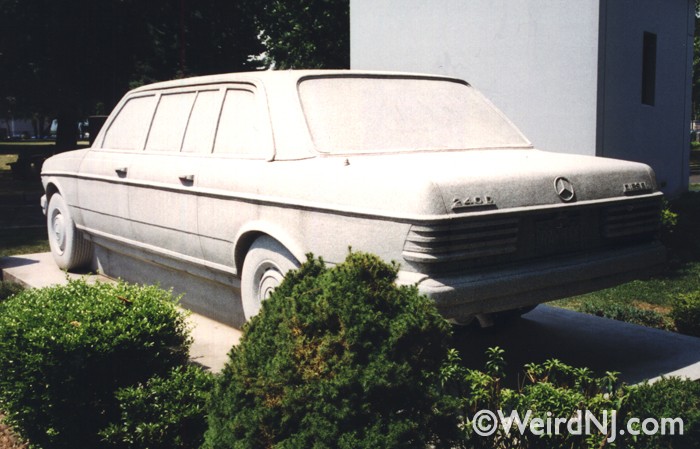 Rock of Ages Carved for Thee

I’d like to share some facts about the stone Mercedes with you and your readers. First, the car is made of a single block of stone quarried at the Rock of Ages in Graniteville, VT. It was transformed into the stone Mercedes at their craft center. It was constructed and paid for by Ray Tse’s older brother. There is a Chinese custom that if you promise something to someone and they die before the promise can be fulfilled, then you must try and do your best to keep the promise to the deceased person. Thus, the deceased Ray got a Mercedes behind his mausoleum. (Continue reading below…)

Rock of Ages was very proud of their achievement on the  Mercedes. Supposedly, they got an actual car to take precise measurements from to create the stone reproduction. Like you, I also love nifty graveyard stuff.  –Ray Makul

This Internet story is only an excerpt of the information we have published on this subject. For the full story we suggest you refer to past issues of Weird NJ Magazine.  To keep up to date on this story and all the other weird goings on in the state subscribe to Weird NJ and we’ll deliver it to your door.