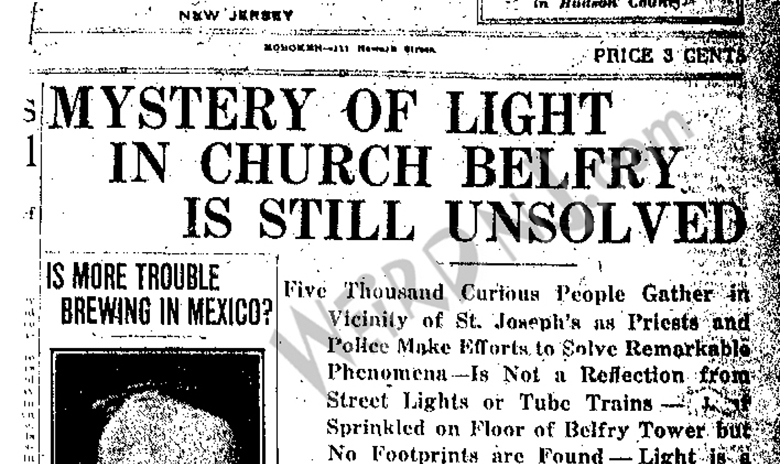 Something strange has been going on at St. Joseph’s Church on Pavonia Avenue in Jersey City for the past 100 years.  Two mysterious “cat’s eyes,” (as neighborhood residents have

called them), have been gleaming out onto the residents of Hill House, from the church’s belfry.

But no one seems to know where the lights come from. The lights, which are shaped like half moons, have mystified local residents since they were first spotted in 1921.  They have drawn the attention of thousands of onlookers over the years, and there is no explanation for them.  They are said to be a pale, phosphorescent glimmer, and at times show a bloody red streak. 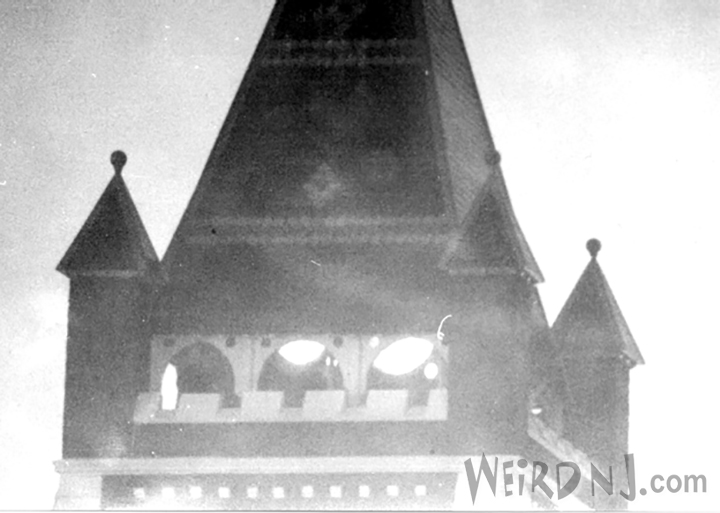 Also known as “St. Joseph’s Eyes,” the lights first appeared in July of 1921 and drew a crowd of 5,000.  Though priests at the church tried every method they could think of to locate their source, including sprinkling flour about the belfry floor in hopes that footprints would be found, it was evident that the lights were not caused by a light source from inside the church.  If the mysterious Cat’s Eyes were the result of reflected light form an outside source, that source could not be found. 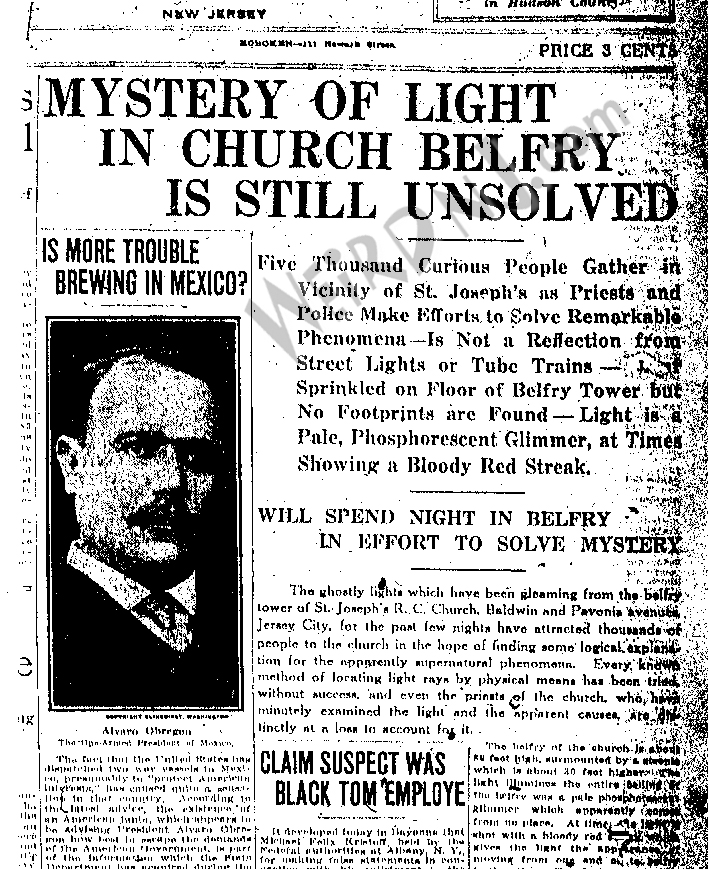 In 1954 the lights started to appear again.  For three weeks during the month of May, the lights re-appeared after the death of a church sexton who was found in a seat of the choir loft.  His last known words were “I’m going into the belfry.”

These days people passing the church still gaze up at St. Joseph’s steeple in hopes of catching a glimpse of the mysterious lights.  They have only appeared sporadically over the years though, and there is no way on knowing when the Eyes might shine again.

In 1991 when I was a Senior News Columnist I was sent out on assignment with our photographer to view the St. Joseph’s Cats Eyes for the first time since 1954, when my father took me to see if we could spot them when they last appeared.

On February 27, 1991 standing on the northwest corner of Baldwin Avenue and Newark Avenue in front of the luncheonette, right across from the Brennan Hudson County Court House, I saw the “eyes” again.  That night  I did all I could to check and see if the eyes were a reflection of lights from the Court House or anywhere else.  I could find no possible reflection from anywhere.  I showed my father a photograph, and he just shook his head in amazement, as these were the “eyes” he failed to see in 1954. 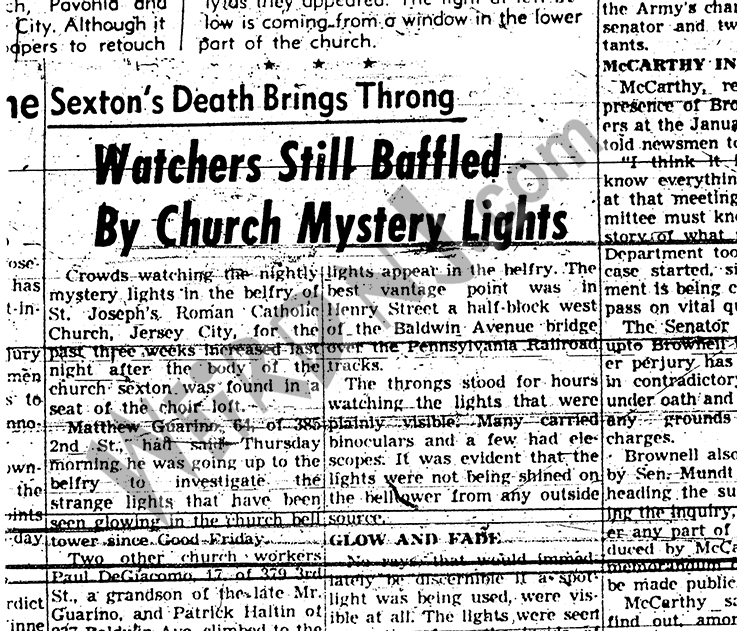 In 1954, because of the crowds, officials took the time out to put a tarpaulin cover over the belfry windows to dissipate the crowd of viewers. The idea worked, but something else happened.  The local newspaper took a picture of the tarpaulin, and many people noted that from the photograph on the front page, and the way the tarpaulin folded in hanging fashion, it resembled the face of a devil! In 1991, church and City officials obviously just let the “eyes” take their natural course of fading away, and no tarpaulin was used to cover the Belfry windows.  –Matthew F. Amato, Jr

The Eyes Still Have It

I am a Jersey City Police Officer, the Cat Eyes in the tower of St. Joseph’s steeple can be seen nightly. They are a regular occurrence. What makes this phenomena ironic is that that St. Joseph’s Church runs a school for the blind.  –Chuck

This story is an excerpt from Weird NJ magazine, “Your Travel Guide to New Jersey’s Local Legends and Best-Kept Secrets.” Weird NJ can be ordered through our Web Site, Amazon Store, or Facebook Shop. It can also be found at hundreds of shop around the state and beyond. To find a store near you that carries Weird NJ go to this LINK.