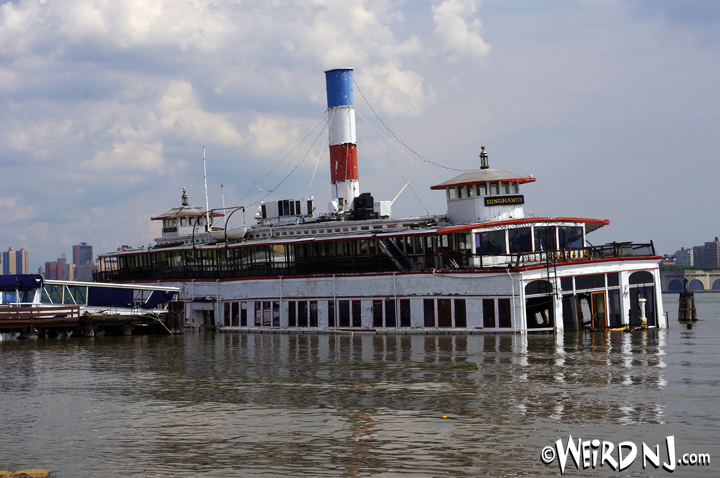 The demolition of a historic Binghamton Ferry, which shuttled passengers from Hoboken to New York City for more than 60 years before enjoying its second life as a floating restaurant will begin this December. The New York Times reports the scuttling of the vessel is expected to take three months and cost approximately half a million dollars.

It’s been an odd looking local landmark for decades now, but even more so in recent years since its been disused and vacant. It’s a gargantuan old ferryboat, patriotically decorated in red, white and blue paint, languishing away on the dark waters of the Hudson River just beyond a desolate parking lot on River Road in Edgewater. Lifeboats, preservers, ship’s bells and all other manner of nautical accouterments, still festoon the moldering hulk. Above its top deck a tall smokestack ascends skyward, but its days of belching its sooty pall are now long behind it. 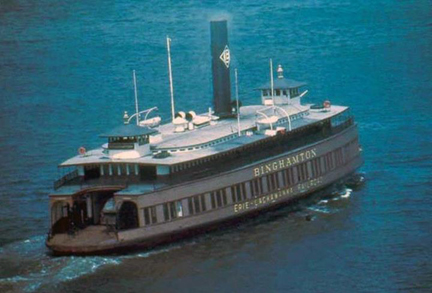 The name of the forlorn vessel is the Binghamton, and it has looked a little more weathered with each passing year since it was last used back in 2007. Built for the Hoboken Ferry Company of the Delaware, Lackawanna & Western Railroad, and first launched in 1905, the Binghamton Ferry, a double-ended twin boiler steamboat, plied the waters of the Hudson River between Hoboken, NJ and Manhattan for sixty-two years. The ship could carry nearly 1,000 passengers and numerous vehicles. But when all ferry service across the Hudson was discontinued in 1967 due to the construction of bridges and tunnels, the Binghamton was put out of service and moored at Edgewater.

The ferry was acquired in 1969 by Edward Russo, an Edgewater contractor, for the purpose of being convered into a restaurant. Russo planned large dining rooms on the Upper and Main decks, plus two pubs in the former engine room. He leased a berth at Edgewater in 1971, but unable to find a concessionaire to operate the restaurant, Russo relinquished control of the vessel in 1973. In late 1974, the Binghamton was sold to Ferry Binghamton Inc., of Hackensack, and she was finally opened as a restaurant and nightclub in 1975. 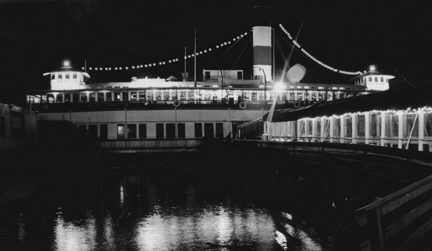 A photo of the Binghamton during its days as a restaurant and night club. Photo by T.E. Rinaldi.

In 1997 the ferry made headlines when its then owner, restaurateur and former New Jersey Assembly Speaker Nelson Gross, was kidnapped on September 17th of that year. He was last seen driving his BMW on River Road in Edgewater near the Binghamton. Other men were seen in the car with Gross as he drove to a bank near the restaurant and withdrew $20,000. A weeklong manhunt ensued, ending with the discovery of Gross’s slashed and bludgeoned body on a wooded embankment along the Henry Hudson Parkway in New York City. Three teenagers from Washington Heights, Manhattan, one of whom worked as a busboy at the Binghamton, were arrested for the robbery and murder of Gross, eventually pleading guilty to the crimes. The restaurant continued to operate for another ten years however, but finally closed in 2007. The ship has remained unused ever since. 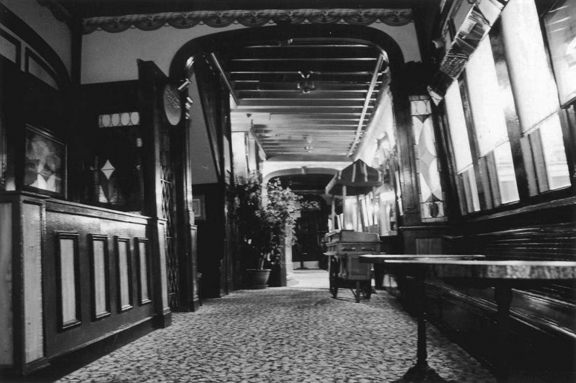 Current owner Daniel Kim purchased the once-elegant 1,400-ton floating restaurant in 2007 for $2 million as part of a group called the Mi & Sun International Corporation. Since then Edgewater town officials have levied a series of code violation fines against the company totaling around $231,000. Kim says his group has paid about $800,000 to do remediation but that he and his company have been unable to ever use the boat. He was quoted in a 2012 Bergen Record article as saying that he was closing in on a deal to bring back a restaurant at the ferry’s location. His hope, according to the article, was to lease the pier rights to a subtenant who would demolish and remove the ferry, at an estimated cost of $300,000, and build a new restaurant on a barge. He said portions of the ferry, such as the captain’s room, would be salvaged and used as decorative momentos. 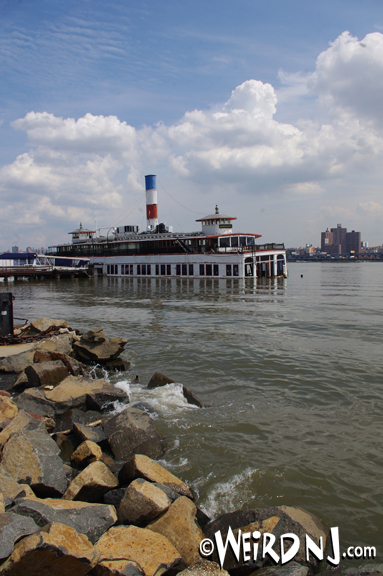 “As we speak, we have a potential subtenant,” he told the Record, adding that he had been “speaking to several parties.”

In 2012 a fire, which Bergen County authorities labeled as “suspicious”, broke out in the early morning hours of May 20th and destroyed part of the walkway leading from the parking lot to the dilapidated hull of the Binghamton.

“It has been a magnet for trouble in the past as people try to enter it,” Edgewater Administrator Gregory Franz said of the Hudson River landmark, turned eyesore. Local marina operator Tom Jacobsen told Channel 2 News, “We’ve had a couple fire calls, kids trapped on it. People get stuck on it when the tide goes out and there’s no way to climb in and out when the water’s up.”

By the summer of 2012 the Binghamton was taking on water, partially submerged and listing to one side. In the fall, it was further swamped when Hurricane Sandy smashed into New Jersey on October 29th, forcing a storm surge of water up the Hudson. Local residents looked on as the river swelled and spreading floodwaters advanced along River Road. The Coast Guard and Port Authority kept a watchful eye on the Binghamton, as wind driven waves crashed over her decks and pieces of the ship were washed or blown away. 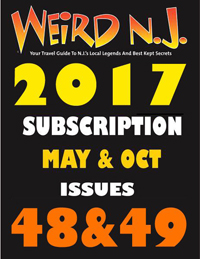 Though Binghamton Ferry was placed on the National Register of Historic Places in 1982, these days it seems like it is just another piece of New Jersey history that is doomed to sink beneath the murky waters of time and to be lost forever. Until recently she was significant as possibly the last surviving steam ferry still afloat that was built to serve New York Harbor, the birthplace of commercial steam navigation and of the double-ended steam ferry. Only these days you can’t really say that the ferry is “afloat.” She rests in the muck and mire, just a few dozen yards off the banks of Edgewater, no longer rising and falling with the changing tides. The gangplank leading out to the ferry was severely damaged by the May 2012 fire, and now stops just a few feet short of ship’s portside gunwale. The dark, brackish waters of the mighty Hudson, which the Binghamton once commanded in her seaworthy days, now flows unabated through her breached and cavernous hull.

Growing up in nearby Fort Lee, Edgewater in the late 1960’s – early 1970’s was a vastly different place than the Edgewater of shopping malls and high-end condos of the 21st century. When you spoke of target back then it wasn’t a store in Edgewater but rather it meant target practice shooting at river rats.  The shoreline along the Hudson was a post-industrial wasteland, and for 12-year old kids it was like Disneyland to us.  We used to go down to the abandoned Alcoa factory––a behemoth of a building.  Out on the river was the huge Alcoa dock, where we cast our crab nets into the Hudson so many summers ago. 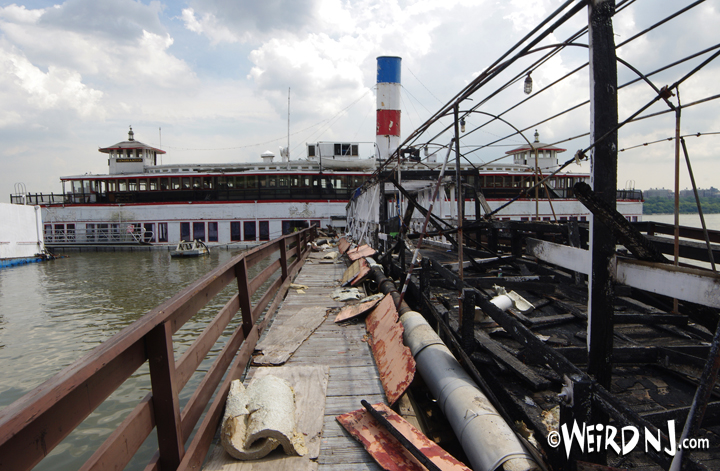 By the mid 1970’s our crab nets were persona non grata at the old Alcoa dock site, as a new resident moved in, The Binghamton.  This ancient mariner of a ferryboat found a new life as a restaurant bar.  As the 1970’s drifted into the disco era of Saturday Night Fever many of us Fort Lee and Edgewater kids turned 18 and the first real night spot we ventured out to was the dance floor and bar of the Binghamton.  You would enter along the covered gangplank walkway and be greeted at the door by, if my memory serves me, a well-known local boxer who was worked as the doorman.  Then you would walk up one of the two staircases––one led to the restaurant on the south side of the boat and the other led to the bar and dance floor on the north side.  Here we Jersey river rats would don our finest corduroy pants and floral shirts (and that’s the guys I’m talking about!) to meet girls, dance and taste many of our first drinks on this Hudson River nightclub in a ferryboat.  You could exit the dance floor to walk on the deck and gaze at the lights of New York City, so close yet so far to many of us. Yet in a few years we would cross that river to experience the nightlife of Manhattan and relegate the Binghamton to our memories.

Decades passed and the old girl began to look worse for the wear.  Occasionally some of us would go there for dinner or brunch with our families, careful not to disturb the ghosts of our nightlife past.  Eventually though, the boat was closed.  I noticed it when I went to Trader Joe’s in Edgewater.  It was a dark winter night a few years back and I walked up to the fence that blocked off the entranceway.  Looming in the distance was the ghost ship Binghamton, black and still with no sign of life.  Most recently during Super-storm Sandy many of us from near and far kept in touch during the storm via face book and we traded photos of the Hudson River rising and nearly engulfing the remains of The Binghamton.  Battered and beaten it still stands, much like Rocky Balboa, down but not yet out.  Soon the remains of The Binghamton may be removed and with that a part of our young lives along the Hudson River in this weird state of NJ will be gone, and remain alive only in memory.  –Tom Meyers, Fort Lee Film Commission 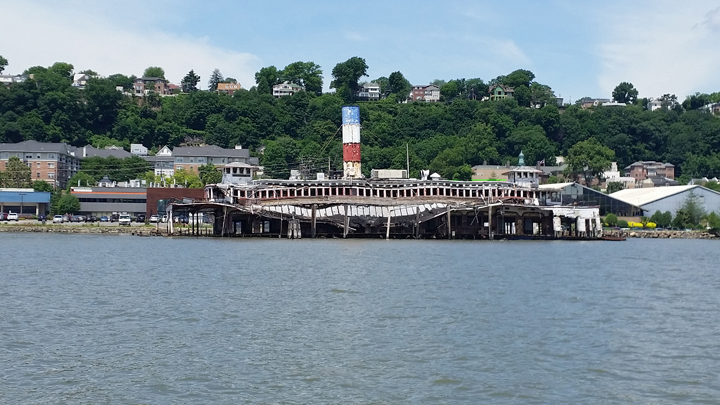