Wildwood’s Wall of Death and the Terror of Tuffy 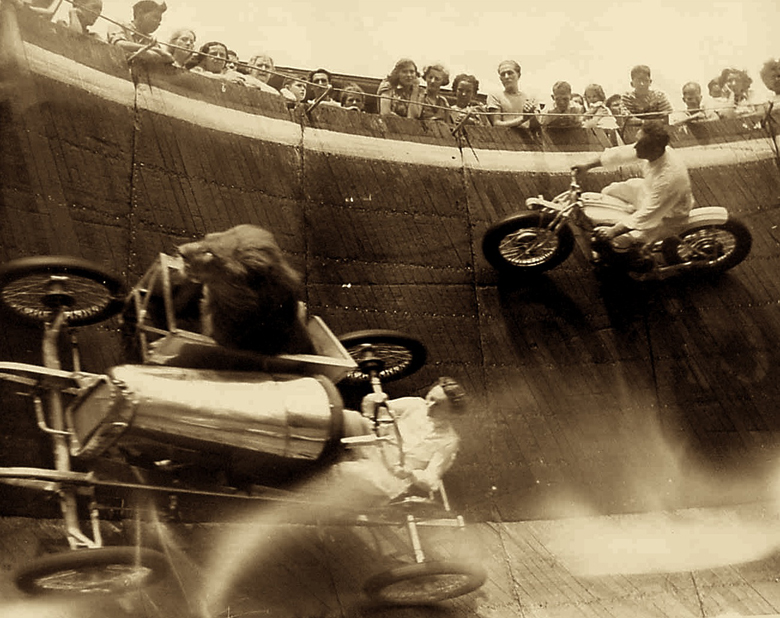 It was October 5th, of 1938 and like elsewhere in the nation New Jersey was mired in the midst of the Great Depression. Despite the hardships being suffered though, summer tourists would still flock to the Jersey Shore to escape their troubles, if only for a brief vacation. For the end-of-season visitors to Wildwood that year their rest and relaxation would soon to turn to terror. 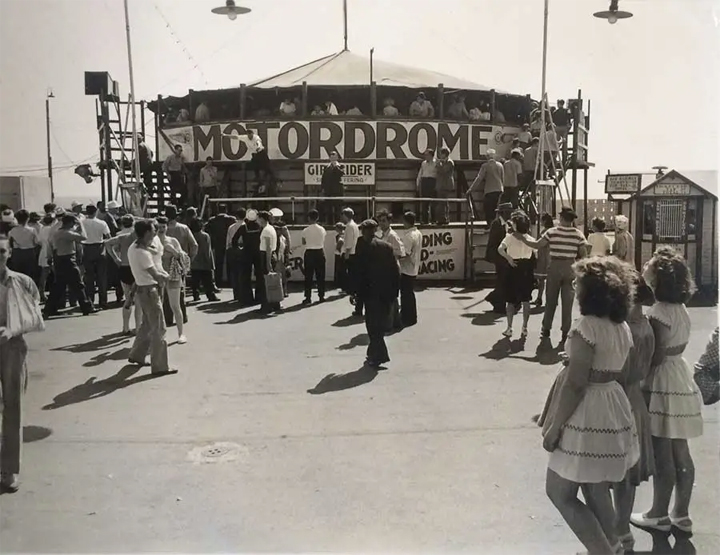 In addition to the sun and surf of the beach, Wildwood’s Boardwalk offered rides, games and other entertainment. One popular attraction in the summer of ’38 was known as the “Motordome Wall of Death.” The act featured motorcycles and race cars whirling around in a wooden bowl-like enclosure. But the real attraction was a lion whizzing past the spectators riding in a sidecar.

The lion’s name was Tuffy, a 300-pound African lion owned by Joseph Dobish, a sideshow concessionaire on the Wildwood boardwalk. Dobish had worked up an act in which his wife Irene drove a race car at breakneck speed around the steep-sided rickety planks of the Wall of Death with Tuffy in a sidecar next to her. 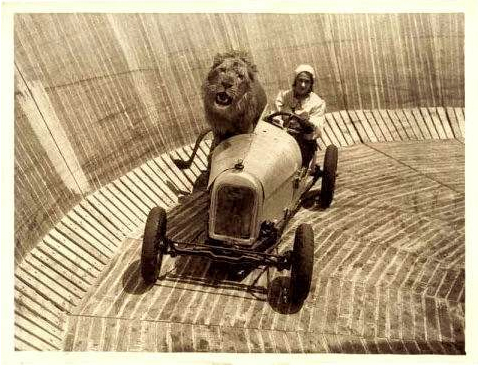 amazement. Like most animal entertainers of the day, Tuffy was subjected to poor living conditions and abject mistreatment. When he wasn’t performing for the crowds he spent most of his days and nights locked up in tiny cramped metal cage.

With Labor Day Weekend just a memory, most of the crowds had long packed up and gone home by Oct. 5. The Wall of Death too had shut down for the season, but Tuffy still lay behind the iron bars of his cage day in and day out.

Dobish went to feed Tuffy at around 5:30 that evening, but when he opened the cage the big cat bolted. In a panic, Dobish had tragic lapse of judgment and wouldn’t inform police of the lion’s escape until an hour later. For the next two hours Tuffy prowled the beach and deserted boardwalk unseen.

The sun had just set at about 7:30pm when a Japanese immigrant named Thomas Saito and his 9-year-old friend Masami Oishi were about to get into car Saito’s car, which was parked about 150 feet from the Boardwalk.

Saito had spent the summer working at a Wildwood auction house, and the fourth grader with him was his boss’s son. The pair had spent the afternoon fishing with Masami’s father and Saito offered to give the boy a ride home from his father’s Boardwalk shop.

Saito was about to enter his car when he heard a terrific roar. He turned to see Tuffy bounding up the boardwalk toward him, about to pounce. At the last moment Saito shoved the boy into the car to protect him. Then the 300-pound feline lunged at Saito, knocking him to the pavement and mauling him as the boy watched, screaming in terror.

The lion then grabbed Saito by the neck and dragged him into the dark labyrinth of pilings beneath the Boardwalk.

Police were alerted by the screams of onlookers who had witnessed the horrific event.

Officers formed posses to and took to the streets to look for the marauding beast – recruiting able-bodied men and even Boy Scouts to help in the hunt. Members of the volunteer fire department warned people to stay indoors.

“Women shuttered their windows, children huddled in their homes and men ventured into the streets, armed with guns and flashlights to warn them of the approach of the huge beast,” wrote the Wildwood Tribune-Journal.

Police cautiously searched among the pilings, following the trail of blood and shredded pieces of clothing beneath the boardwalk, where they found Saito’s mangled lifeless body. His neck had been cleanly broken.

The one of the police officers, Patrolman Millard Campbell, saw something, as shadow. As the shadow began to move he took a shot and wounded Tuffy, but the lion escaped and disappeared again.

Two hours later officier John Gares was patrolling the dimly lit Boardwalk when he heard a strange sound and caught sight of a shadow slinking around out on a wire-enclosed pier. Gares, an eight-year veteran of the force, was known to be a “crack shot” among his fellow officers.

“It was the lion,” Gares later told reporters. “He was closing on me.” Tuffy was just a few feet from Gares, crouching silently. There was a terrific roar, then the lion launched itself through the darkness.

As Tuffy lunged for him, Gares raised his .38-caliber revolver, took aim and squeezed off a single shot, hitting the big cat right between the eyes. Tuffy fell dead at his feet. 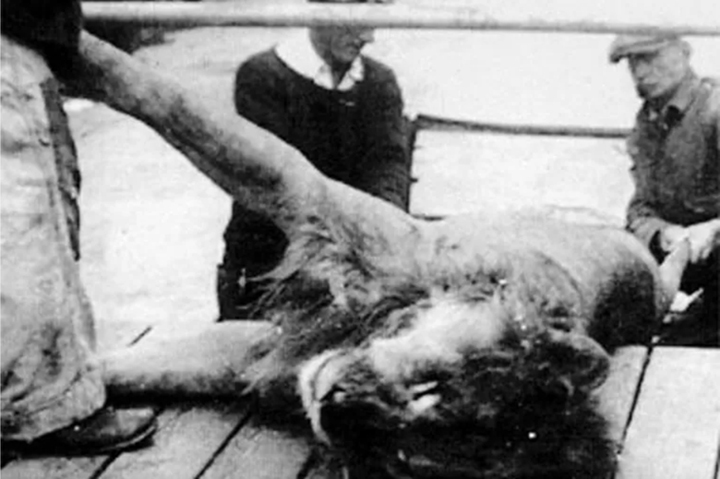 In the wake of the tragedy Gares became a hero and local celebrity for taking down the killer cat. He was deluged with interview requests and received three marriage proposals.

Legend has it that Tuffy’s head was stuffed and hung in one of many Wildwood’s drinking establishments, where it remained on display for several years.

Joseph Dobish, Tuffy’s owner, was charged with involuntary manslaughter and held on $3,000 bail. A grand jury, however, asked the court to enact laws banning such ferocious animal acts from the boardwalk rather than indict him. The shows were outlawed by Wildwood’s Mayor later that year. The Motordome Wall of Death would live on though, albeit with somewhat less entertaining human daredevils in the driver’s seats. 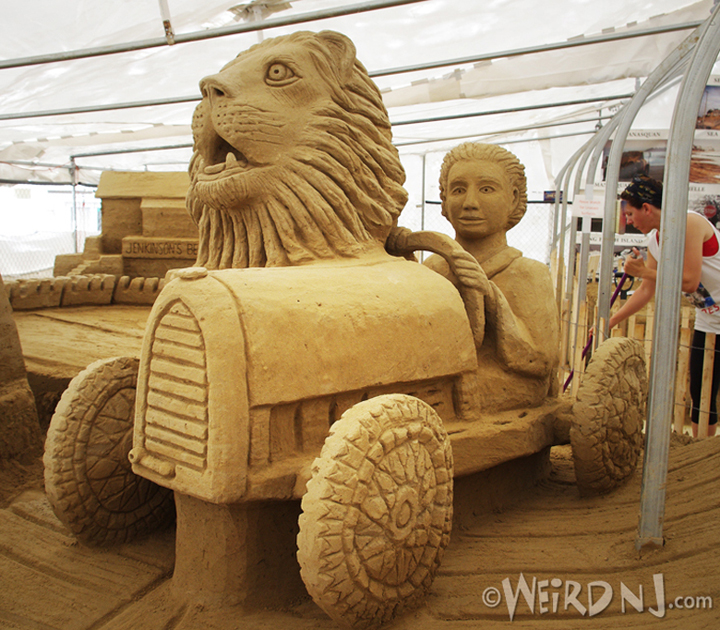 A sand sculpture by Ed Jarrett depicting Tuffy the lion and Irene Dobish.