Lambertville High and the Legend of “Buckeye” 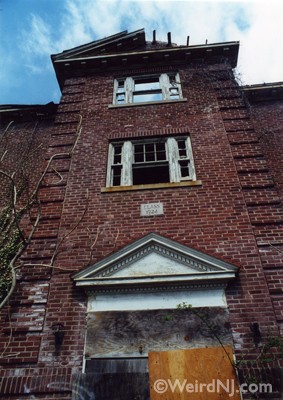 The town of Lambertville was a great place to grow up, especially in the 80’s. All my friends and I ran around in leather and plaid, harassing tourists who came to town to go antique shopping, and with mohawks held high in the air, we would proudly march across the bridge to New Hope and terrorize anything and everything that moved. Since then, I have lived in a number of places and seen many strange things (currently, I reside in a correctional facility), but of all of the places I have been and all the things that I have seen, my childhood times in L-ville were by far the weirdest. Here’s a story that I’d like to share with the rest of my fellow New Jerseyans:

High atop a hill we affectionately call “Music Mountain,” sits the ruins of the old Lambertville High School. This is where all the kids from L-ville and the surrounding areas went to school before South Hunterdon was constructed. I think it closed down around 1955, and burned down about 1984. What’s left of the school still stands today and is even more creepy since the fire. On a chalkboard on the 2nd floor is an intricate drawing of children sitting in rows of desks studying while flames rise up on all sides of them. The floor is a bit unstable. Behind the school, about 50 feet through some tall weeds and brush, sits the old football field, still marked clearly by the rusty old goal posts. This is where the weirdness begins…the story of Buckeye. 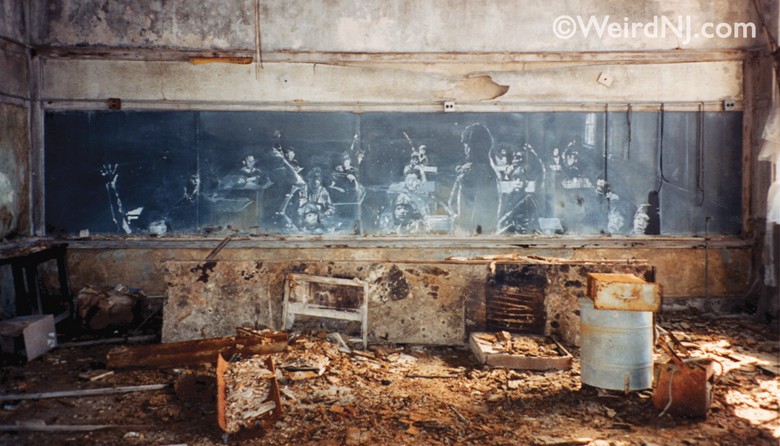 It was a cold day in the middle of November, 1935. Lambertville High was doing the usual on this day, getting ready for the big game. You could hear the marching band practice as you walked in the front door. Banners hung in the hallways, there was a pep rally in the gymnasium, and the thought of L-ville kicking the crap out of its arch-rival New Hope, was on the mind of every kid at school that day. This was one of the biggest days of the year at

L.H.S., for whoever won the annual Turkey Bowl would have bragging rights for the rest of the year.  4:00 p.m. rolled around and everyone watched as the New Hope buses rolled up the hill and pulled around back to let out the players onto the field. By 4:30, the game had started.

Both teams went scoreless the first quarter, but by the time the half rolled around, the score was 21-21. You could almost smell the tension in the air. The Eagles (L-ville) and the Buckeyes (New Hope) both did their absolute best with the half-time show, hoping to get the crowd up and the players into the game. The third quarter now began. New Hope had the ball and was running for the touchdown when the wide receiver from New Hope was tackled. To everyone’s surprise, he didn’t get up. The coaches rushed the field but by the time they got there, the boy was dead, his neck broken, and his head almost turned completely around. The game was forfeited. 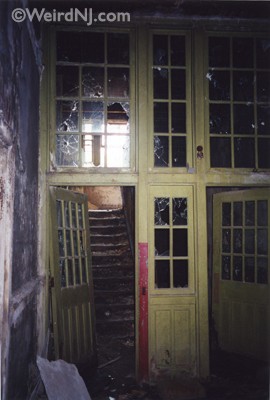 The parents of the boy who was killed petitioned that football was too dangerous and that New Hope should give it up. (This accounts for the reason why New Hope still doesn’t have a football team to this day.) The years went on, and the memory of the poor Buckeye that lost his young life that day faded from everyone’s memory.

1955—L.H.S. packed its bags and headed up to the new school, South Hunterdon. The old high school became the local hang-out for the greaser gangs of the day and many of the fights between L-ville and Flemington or New Hope took place up there. One night, a group of 4 or 5 guys was hanging out on the back steps when one of the guys told the story about the Buckeye who had died there. He had heard it from his uncle who had gone to school there at the time it had happened. 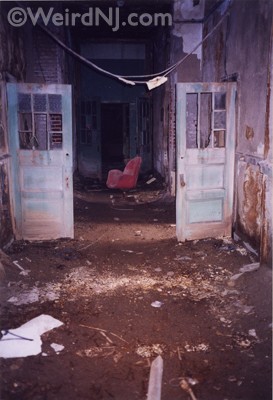 The guys were feeling a little rowdy and were a bit drunk. They started clowning around and joking about the death and one of them stood up and proclaimed, “I challenge Buckeye to a race across the football field!” Everyone laughed and continued on with their drinking. Pretty soon, a cold wind started to blow and everyone became silent.

From the far end of where the football field once was, a pair of evil red eyes appeared in the darkness and a voice whispered through the wind and told the boys, “Run across the football field from end to end or die!” One of the boys turned and started to run when he fell to the concrete, cold and blue. The remaining boys heard the voice again, so they all lined up on one side of the field and began to run to the other side. They ran with all that they had and when they finally reached the other side, another one of the boys was missing. They all ran home and locked the doors behind them, not saying a word about what had just happened.

The next day, when the parents of the two missing boys called the police, the bodies were discovered up at the old high school, their heads almost turned completely around. The incident was blamed on a fight. Signs were posted and a chain-link fence was installed on the driveway of the old school.

I have been to the old high school more times than I can count and can definitely vouch that there is a strange presence there. Every time I walk up the old concrete steps, a chill goes down my spine. A few times during my childhood, I got up the nerve to challenge Buckeye but always, halfway through the word “Buckeye,” I would get a crazy feeling and shut my mouth and head right home. Some people claim it’s just a myth, some say it’s real, but I can say for sure, it is something. So if you decide to visit the old school, take my advice: don’t go there alone, and definitely don’t go there at night! –Johnny K. 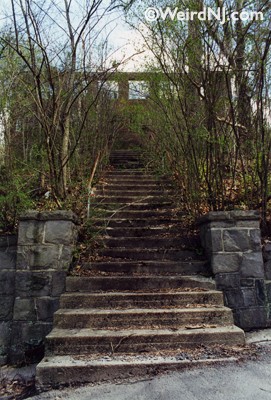 Challenging Billy, NOT Buckeye, to an Unfriendly Game of Ball

“Buckeye” isn’t the name of the dead football player that most of the local kids of Lambertville remember, it is “Billy” that the ghost is called (I myself am a resident of Lambertville and spent many a scary night drinking and partying in the old place, believe me it is not something to fool around with! The local legend connected with “Billy” is that if you go to the old stairwell by the front door leading into the place and than stand facing the front window while standing between the first and second floor stairway, and utter the words “I challenge Billy to a game of football”. A football will be thrown from the top of the staircase by Billy, breaking your neck in two! Just like what happened to Billy almost 75 years ago!

Another story about the kids who challenge Billy to a game of football is that they will be enveloped by a strange mist and then will disappear. A guy I know named Lem actually did try to summon Billy on the football field once after a kid they just met brought them up there to try it. The mist arose along with a strong gust of wind and he swears that he saw something come charging across the field to get them. They all ran and nobody ever saw the mysterious kid again! I asked my grandmother, who actually went to the school and lives in the middle of town near Mason’s Bar. She assured me that the legend of the boy being killed during the middle of the game was true, but his name was Jimmy Cavallo, not Billy or Buckeye. –Richard Scurti 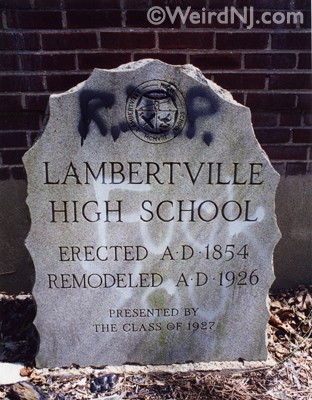